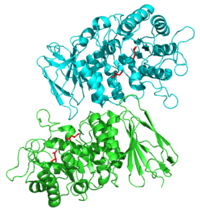 The protein encoded by the Fabry-associated GLA gene: α-Galactosidase A

The Fabry disease is a rare X-linked lysomal storage disease. It, or more precisely its symptoms, was first described in 1898 by the german dermatologist Johannes Fabry and independently by William Anderson in the same year. The ICD-10 classifies it as E75.2, which represents 'Other sphingolipidosis' in the group of 'Disorders of sphingolipid metabolism and other lipid storage disorders'. This is, by the way, the same classification as for the Gaucher's disease.

The disease results from deficient α-Galactosidase A activity which leads to a progressive accumulation of globotriaosylceramide (Gb3) in the lysosomes in the different tissues. 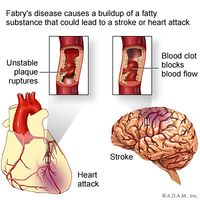 As almost each family has its own private mutation, phenotypes of affected persons can be very variable. In general, with increasing age symptoms become more severe. This effect is due to more and more accumulated glycosphingolipids that cannot be converted by the dysfunctional enzyme. The built up globotriaoslyceramide (Gb3) and related glycosphingolipids in the lysosomes, tissues, blood vessels and organs lead to a malfunction of major organs in the body starting at an age of 30 - 35 (see picture on the right). Thus untreated patients die approximately 10 - 20 years early (females and males, respectively).

Acroparesthesia is signaling the clinical onset of Fabry Disease. It is caused by deposited glycosphingolipids in the small blood supplying vessels of the peripheral nerves. Another very typical symptom for Fabry Disease is the whorled streaks and cloudiness of the eye (cornea opacity) resulting from deposits of granular material on the posterior lens capsule.

The GIM results from accumulated Gb-3 in small intestinal vessels and autonomic ganglia of the intestinal. Eventually this often leads to a weight loss of the patient. From early stages on psychosocial manifestations like depression and fatigue lead to a degression of life quality. In a study [Whybra et al 2004] the occurrence of angiokeratomas correlated with the severity of Fabry disease and its systemic manifestation.

According to FOS, the most common cause of death were renal failure (males) and cerebrovascular disease (females), whereas Waldek et al claim that the principal cause of death is cardiovascular disease. Most of these diseased patients had received a kidney transplant. Again, all these symptoms are in consequence of progressive glycosphingolipid deposition mostly in vessels and in the lysosomes.

It is believed that late onset variants mostly with specific mutations are underdiagnosed, because of the missing typical early onset symptoms like acroparesthesia and cornea opacity. According to Rolfs et el. patients with these variants in the majority of cases have missense or splicing mutations leading to a residual α-galactosidase A enzyme activity.

This variant does not affect patients until their sixth to eighth decade. Usually a hypertrophic cardiomyopathy is diagnosed. Besides from a mild to moderate proteinuria, due to accumulated Gb-3 in the podocytes, no involvement of the kidney is observed.

Many patients with this variant are misdiagnosed, because about 80% of them do not show any signs of angiokeratoma, acroparesthesias, hypohidrosis, or corneal opacities. However they had moderate to severe left ventricular hypertrophy.

As described in Symptoms, the diversity of symptoms and especially the lack of early onset ones in the atypical variants make Fabry desease hard to diagnose. Thus it is believed that the number of patients suffering from Fabry Disease is underestimated.

Most cases of Fabry Disease are revealed due to a family member being diagnosed. Also, in a lot of cases observation of early onset symptoms like angiokeratoma and acroparesthesia lead to further testing and eventually to the diagnosis Fabry Disease. Other symptoms that are associated with the disease may also be initiation of further examination.

After a presumptive diagnosis, there is a demand in substantiating this suspicion. The first step would be an enzyme assay. Usually a fluorometric assay is performed, where the difference in the fluorescence of substrate (4-methylumbelliferyl-α-D-galactopyranoside) and product is measured. Thereby, the enzymatic activity of α-Gal A may be measured. Less than 1% of normal enzyme activity is an indication of classic Fabry Disease, more than 1%, but still decreased activity, indicates atypical variants (see section Major manifestations in Classic and atypical Fabry Disease). This method is not sufficient for female carrier detection. Due to random X Chromosome inactivation some females have a normal or only little decreased enzyme activity.

Thus molecular genetic testing is necessary. This method is also useful for early detection and thus treatment at an early stage if family history is known. Most of the times full gene sequencing is needed, where the mutation in the GLA gene is detected. Almost 100 % of affected males, but less than 100% of affected females can be detected. Mutations in heterozygous females may not be detected, as well as deletion or duplications in the gene of both sexes (PCR fails in this case). Thus targeted mutation analysis can be performed, if the private mutation of the respective family is known. Otherwise, if a partial or whole gene deletion is suspected, several methods, including quantitative PCR and multiplex ligation-dependant probe amplification, can be applied.

All listed diagnosis methods may be performed prenatal.

Currently there is no cure for Fabry Disease, but there are some ways to treat the symptoms.

Usually, Fabry Disease is diagnosed after the onset of symptoms. Thus, manifestations need to be treated individually. Some examples:

Acroparesthesia: The pain in the extremities is reduced by administering agents that interfere with the sodium channel, such as Diphenylhydantoin.

Enzyme Replacement Therapy (ERT) should be initiated as soon as possible in each patient. By administering synthetic α-galactosidase A an almost normal metabolism may be ensured. Thus cerebrovascular, cardiac and neurological complications can be prevented. Drawbacks of this treatment are the high costs and the need for an infusion at the hospital every two weeks.

It is important to undergo prophylaxis of heart, renovascular and cerebrovascular disease. These are essentially the same as for patients without Fabry Disease. Usually the blood pressure and cholesterol need to be normalized. Acetylsalicylic acid may be applied to prevent stroke. Also smoking should be avoided, because it has been shown that obstructive lung disease is more severe in smokers.

Substrate Reduction Therapy is already an approved therapy for other lysosomal storage diseases like Gaucher Disease and thus was also considered as therapy for Fabry Disease by inhibiting the addition of glucose to ceramide (e.g. with a glucosylceramide synthase inhibitor like Miglustat) and therefore blocking the formation of Gb3.

Gene Therapy currently is under research without major longterm benefit. Although the amount of built up glycosphingolipids is reduced up to 60 - 85 % in the major organs after one injection of a viral vector containing a modified α-actin promoter, the Gb3 level had not been significantly reduced after 6 months anymore. see Researcher hope that new self-inactivating lentival vectors may be of help in the future.

Chaperon Therapy: Chaperons assist the non-covalent folding or unfolding and the assembly or disassembly of macromolecular structures. In the body a certain type of these proteins can increase the catalytic activity of some misfolded forms of α-galactosidase A. A hindrance is the large amount of patients with nonsense mutations who are excluded from this therapy of Fabry Disease due to the lack of a detectable residual enzyme. Therefore it is necessary to determine the type of mutation before starting the treatment. 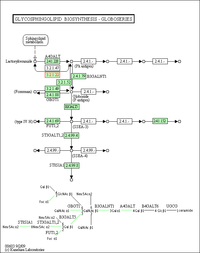 The glycosphingolipid biosynthesis - globoseries. The α-Galactosidase A enzyme (EC 3.2.1.22) is marked in red.

The cause of the Fabry disease lies in the globoseries of the glycosphingolipid biosynthesis. In the first step of this metabolism, lactosylceramide reacts to from globotriaosylceramide. However, these two substrates are in imbalance because of the deficient enzymatic activity of α-Galactosidase A, which catalyzes the hydrolysis from globotriaosylceramide (Gb3) to lactosylceramide, which again leads to an accumulation of Gb3 in this metabolism. This excess of Gb3 provokes the symptoms of the Fabry disease.

The affected hydrolysis can be described in detail by: 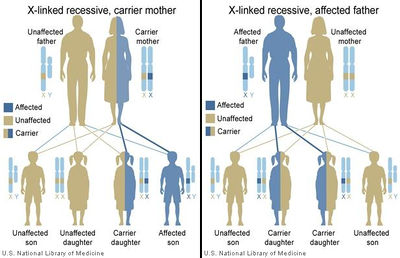 Mode of inheritance for a X linked disease like Fabry

Fabry Disease is inherited in an X-linked manner. Thus there is a 50% chance for an affected or a carrier female to pass on Fabry Disease to any of her offspring. Any of these male children who she passed the allele on to will be affected, her female children are obligate carriers and can be affected if they got the mutated allele.

Due to the fact that males only have one X chromosome, they do not pass on the disease to any of their male offspring, but all of their female children are obligate carriers and may even be affected.

(see picture on the right)

The human X-Chromosome. The location of the GLA gene is highlighted in orange.

The enzyme α-galactosidase is encoded by the gene GLA which is located on the long arm of X chromosome at the locus Xq22.1 (100,652,778 – 100,663,000) (see the figure on the right). It consists of seven exons without any alternate splicing sites and is transcribed on the reverse strand.

There is no other disease associated with the GLA gene according to OMIM. The mutations in this gene are usually private in a family-wise scope which is the reason why there are so many of them known (more than 650 in HGMD). It can be distinguished between two types of the Fabry disease, the classic and the variant phenotype, which are severe and milder, respectively.

The table below shows the numbers of the different mutation types.

The reference sequence of α-Galactosidase A that will be used in the following tasks was obtained from Swissprot P06280.