The following analyses were performed on the basis of the α-Galactosidase A sequence. Please consult the journal for the commands used to generate the results.

The databases we used to find the information about SNPs in our gene differ in the amount of information, its quality and how up-to-date they are. <xr id="tab:database_comparison"/> gives a short overview of the differences.

<figtable id="tab:database_comparison"> Comparison of the databases used for the analysis

These mutations have an effect on the mRNA splicing.

Mutations that to changes in the regulation of the gene

Deletions of 20 bp or less

Insertions of 20 bp or less

Deletions of more than 20 bp, can affect several kb

Insertions or duplications of more than 20 bp, often several kb

Deletions, insertions, duplications and inversions that were observed at specific gene location.

The number of SNPs of gene GAL from HGMD per protein sequence position. The start of the mature α-galactosidase A protein at position 32 and the active site at position 170 and 231 are marked.

As depicted in <xr id="hgmd_distribution"/> there are no real hotspots according to HGMD. Since the cause of the Fabry disease is a degenerated α-galactosidase A protein, the SNPs at position 0 in Methionine (the start codon) could be expected. Apart from that, there are SNP accumulations near the start of the mature protein around position 50, at the active site at position 170 and 231 and one bigger one in the region from position 260 to 300.

The number of SNPs of gene GAL from dbSNP per protein sequence position. The start of the mature α-galactosidase A protein at position 32 and the active site at position 170 and 231 are marked.

At the time we checked dbSNP, it listed eight silent single point mutations. Their distribution across the α-galactosidase A protein sequence is shown in <xr id="dbSNP_distribution"/>. It is not surprising that there are no hotspots, when only 8 SNPs are examined. The only notable, but small, accumulation is around position 40.

Single base-pair insertion and deletion, which also count as point mutations, can have a more severe impact on the protein, because they introduce frameshifts. Frameshifts change the sequence and therefore the protein structure for larger regions of the gene. They can be less severe when several of such mutations occur close to each other on the DNA sequence and, by chance, the original frames are restored. In this case, only the amino acids between the first frameshift and the one, that shifts one frame to an original one, are affected.

Distribution and number of SNPs along the sequence of GLA

The OMIM database lists 62 (actually 63, since one entry contains 2 SNPs) allelic variants for the gene GLA. Out of these, 6 are exon deletions, 10 are base pair deletions, 4 are located in non-coding regions, 1 was an exon duplication and 2 Insertions (see OMIM data-Allelic variants). The remaining 40 variants are specified as SNPs and are listed in OMIM data-SNPs.

Of course, all of the mentioned mutations are disease causing. In <xr id="fig:OMIM_SNPs"/> we show the distribution of SNPs along the sequence of the α-galactosidase A coding gene. There seems to be no real "hotspot" of SNPs, but a long strip of sequence without any point mutation (position 66-112). In the signal peptide only one mutation is listed, and in at the active site amino acids (170 and 231), as well as the binding site (203-207) there are none.

In SNPedia exists a site for the disease, that is caused by mutations in the gene we are examining, Fabry Disease, but not for the gene itself (GLA). Thus we performed a query with the search term "Gene=GLA", which resulted in 40 hits (see SNPedia_data). 32 are missense mutations and the remaining 8 are stop-gained.

Again, only one hit was in the signal peptide part of the sequence and none of the important residues is mutated (see <xr id="fig:SNPedia_SNPs"/>). The gap of no variation between position 66 and 112 can be observed as well and besides from that a rather even distribution without big peaks.
Without deeper look, it can be said, that the results from OMIM and SNPedia are very similar, by simply comparing <xr id="fig:SNPedia_SNPs"/> and <xr id="fig:OMIM_SNPs"/>

Distribution and number of SNPs found in SNPdbe along the sequence of GLA. Disease causing mutations are red, non-disease causing green

Here, the distribution of SNPs that are not causing Fabry's Disease (or any other disease) appears to be homogeneous, except for a long sequence part from residue 29 to 117.

If we use only confirmed point mutations (see <xr id="fig:SNPdbe_SNPs_conf"/>), the plot looks very different, since there are only few non-disease causing SNPs left (7). 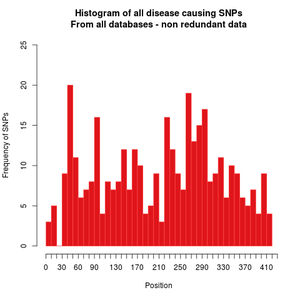 Histogram of SNPs that are listed as diseases causing; Duplicates were counted only once 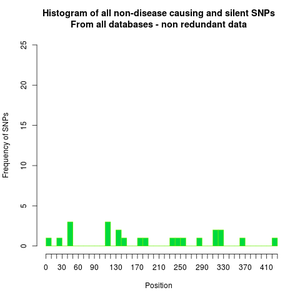 Histogram of SNPs that are listed as non-diseases causing or silent; Duplicates were counted only once

All found SNPs are listed at Fabry SNPs. As reference sequence serves NP_000160.1 for all databases which is identical to the swissprot sequence P06280 we already used in the previous tasks.

In order to discover the overlap of the different databases, we displayed each SNP as a point along the sequence, indicating, whether it causes Fabry Disease, or not and which database the information was gained from. We tried to display all databases, but since there are too many HGMD hits, and no real hotspots of the SNPs in this database could be seen (see Fabry_posvssd_all.png), we decided to display only the remaining four databases in <xr id="fig:posvssd_noHGMD"/>.

Here, it becomes obvious, that the disease causing mutations have almost 100% coverage (pink, green and blue points almost never appear alone, but most of the time in triplets), while the non-disease causing point mutations do not group together. 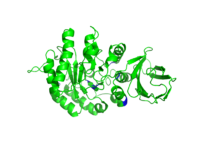 Silent SNPS (blue) mapped onto the structure of α-Galactosidase A 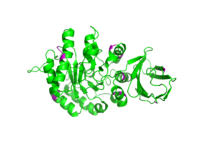 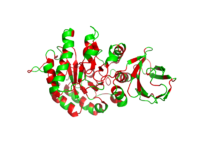