This page contains our results and discussions. The lab journal can be found here.

The reference sequence of α-Galactosidase A that will be used in this task was obtained from Swissprot P06280. 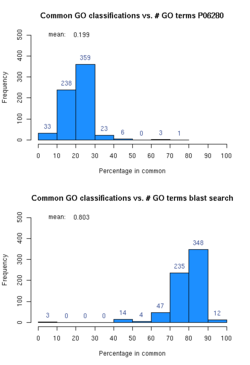 First we performed a BLAST search with the default parameter. Since all hits were significant we raised the number of shown one line descriptions (-v) as well as the number of database sequences to show alignments for (-b). This led to 663 hits with an E-value smaller or equal to 0.003, which we declared as significant in our search. For these proteins we extracted the E-value and the number of positive and also of identical amino acids of the pairwise alignments, as well as the length of each hit. You can see a histogram of each of these features on the left.

For the comparison of the GO terms, we obtained the set of terms for each hit and analyzed the number of those in common with the GO terms of the search protein α-Galactosidase A . We devided the number of common terms by the number of GO terms of P06280 (49). Since these proportions are very small, we thought it would also make sense to explore the fraction of the hits GO terms shared with the reference terms. Thus we devided the number if common terms by the number of terms of the hit. The histogram of the second rate show that in average over 80% of the GO terms of each hit are common with those of AGAL. The small amount of average accordance of the Galactosidase terms to the hit terms may be due to the fact that humans are a lot more complex than the species the homologous hits belong to. So the protein has to fullfill more needs in a more complex organism and thus has more GO terms assigned. 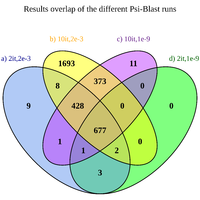 Overview of the Psi-Blast result sets

We also used Psi-Blast - the profile blast program - to search against the big80 database. The one-line description output parameter (-v) was increased to show a maximum of 4000 hits and the same goes for the number of alignments to show (-b). There were four runs with the iterations set to 2 and 10 and the e-value cut-off to 2e-3 and 1e-9, respectively. All the other options were left at its default values. The exact commandline calls can be obtained from the journal. 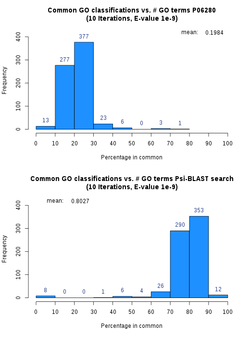 We searched the "big80" database with HHblits using the default settings and also with the maximum number of possible iterations (8).

</figtable> The HHBlits search was performed with the maximum E-value in the summary and alignment list set to 0.003 (-E) and the minimum number of lines in the summary hit list had to be 700 (-z). From this search we obtained only 325 significant cluster.

We also compared the GO terms in a similar manner as in the BLAST section. Here we discovered that on average only 14% of the AGAL_HUMAN protein's GO terms are included in the hits' terms. The "reverse" calculation revealed that around 70% of the hits' GO classes are in common with the search protein. This is rather low in comparison to the BLAST results.
In the pictures on the left, one can see, that it did make only a slight difference in the distribution of the shared GO terms whether only the first identifier of each cluster was included or all of them were analyzed.

The mean E-value in contrast is almost equal to the average E-value of the BLAST search. The same applies to the number of identical amino acids. The number of E-values and fraction of identical residues is comparable to the BLAST values, since there is only one E-value, %Identical and %Similar for each cluster.

</figtable> Since we thought that the number of significant hits was too low, we performed another HHBlits search with 8 iterations. Doing so, we gained 729 cluster with E-value smaller or equal to 0.003.

Considering only the first identifier in each cluster, the similarity in GO terms became better, but all other comparative values, like average E-value, similarity and identical residues got worse. If all identifiers are taken into account, also the similarity in GO terms becomes worse, but the distribution again is akin. This leads to the conclusion, that the proteins in one cluster actually do have almost completely the same GO terms. This can absolutely be explained by the algorithm of HHBlits.

Thus increasing the number of iterations might be better to obtain more homologous proteins, but since the similarity is smaller, the conservation might also be not as high as for proteins detected with less iterations.

The first HHblits run took about 2.5 minutes, the second one about 16 minutes (see section Time).

For the Venn diagrams above, only the first identifier of each HHBlits cluster is used. This is only useful in the sense, that the number of proteins is comparable. In the Venn diagrams one realises, that only a small portion of the found hits is shared by all three methods. Each method seems to have a very unique set of findings. The biggest overlap is between the BLAST and Psi-BLAST hits, which is according to our expectations, since these two use similar approaches, while HHBlits searches by using iterative HMM-HMM comparison. These facts become most obvious in the last picture, where only the 100 best hits of all three methods are compared. Only 6 hits are common among all methods. In the remaining 94, about half are shared by BLAST and Psi-BLAST, the other half is unique in BLAST and Psi-BLAST. HHBlits has 84 unique hits and shares 5 hits solely with each of the BLAST algorithms. The comparison of all hits with E-value smaller or equal to 0.03 in all methods looks similar. It is noteworthy that here even a small number of hits is even shared only by HHBlits and BLAST (52), as well as Psi-BLAST and HHBlits (2). The shared hits of the two different HHBlits searches with 2 and 8 iterations shows also a great amount of overlap.

In the picture below, all identifiers in the HHBlits clusters were used. In this case a lot more identifiers are shared among all three methods. Not in respect to the total number of ids in the the HHBlits clusters in total (8463), but in respect to the number of identifiers that the two BLAST methods do not share with HHBlits. Here only 193 ids are not at all shared with HHBlits. The comparison of the first 100 hits of BLAST and Psi-BLAST was performed with the 100 first clusters in the HHBlits output. Again a larger amount of ids was shared by all three methods (39) and also few hits were unique in the BLAST searches (29 in sum).

On the right, you can see an animated histogram of the distribution of the E-values, for the search performed with different methods. The R Script is based on Andrea's R Script psiBlast.evalueHist.Rscript

The most obvious fact is, that the E-value distribution of the Psi-BLAST hits is very different from the other two methods' hits. The Psi-BLAST histogram has its maximum around -60, while the histograms of the BLAST and the HHBlits search do not, but rather tend towards the zero point. Comparing especially the BLAST and Psi-BLAST results the advantage of refining steps and more iterations becomes clear, since the quality, in respect to the E-value, increases. Thus in respect to the E-values I would prefer using Psi-Blast.

We evaluated the time the programs ran with the command "time"

Each of the alignment tools ClustalW, Muscle, T-Coffee and 3D-Coffee was run on the three dataset to produce an multiple sequence alignment. The exact commandline calls are listed in our lab journal. Since 3D-Coffee needs a structure template and there were no suitable hits with a pdb entry assigned, we searched for a structure of a homologous sequence in pdb. We used the following pdb templates for the three datasets:

However, the structures do not seem to add much valuable information to the alignment, so that the 3D-Coffee alignments were all identical to the one that T-Coffee generated.

In comparison to the other methods ClustalW seems to find less conserved columns in all three datasets.