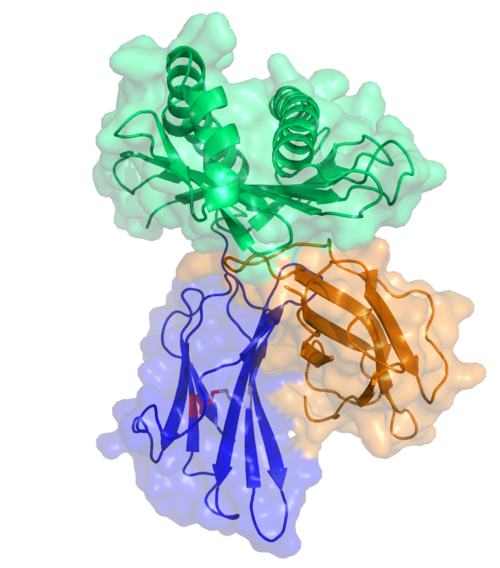 Figure 1: The two domains of the HFE protein, the MHC I domain (green) and the immunoglobulin constant domain (blue) are shown in complex with beta-microglobulin (orange). The cystein at position 282 is highlighted in red and its disulfide interaction partner in white. PDB ID: 1A6Z.

Hemochromatosis is a hereditary disorder that leads to an increased intestinal iron uptake from food. The excess iron is stored in the parenchymal cells of organs and tissues and thus disrupts their normal function. There are various genotypes that can lead to hemochromatosis. The most common form of the disease is caused by a point mutation in the HFE gene. HFE stands for High FErrum.

The hemocromatosis phenotype and its harmfulness varies in patients with the same disease causing mutation. Symptoms are caused by a high, toxic iron accumulation in parenchymal cells of important organs, like the heart, the liver or the endocrine glands. The disease is usually diagnosed in middle aged patients, because the iron accumulates over time and severe symptoms are not immediately apparent. Depending on which organs are affected most by the increased iron uptake, the symptoms range from simple biochemical abnormalities to severe diseases such as heart failure and liver cirrhosis.

The individual phenotype varies that much, because the genetic background only gives a predisposition to hemochromatosis. Human and environmental factors play an important role as well. In general, male individuals who have the genetic predisposition, have a higher probability of developing hemochromatosis, supposedly because females have an overall higher iron loss due to menstruation.

See also the description in:

The role of iron in the body 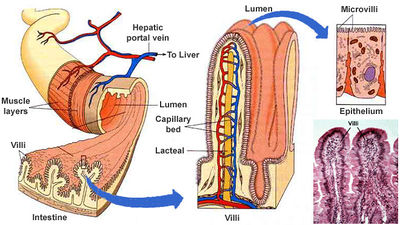 Iron is the 4th most common element in the world. In nature, it normally occurs in its oxidized form Fe3+, which is unsoluble in water. That is, why iron in humans mostly occurs complexed. Free, water soluble iron ions that appear in the reduced form Fe2+, are toxic because they can react with H2O2 to produce highly reactive hydroxy radicals that damage membranes, proteins and nucleic acids. Nevertheless, iron plays a crucial role in the human body. It binds to hemoglobin as a cofactor and enables oxygen transport. The total amount of iron in the body ranges from 3000mg-5000mg, whereby around 65% are bound to hemoglobin and the rest is either bound to other proteins as cofactor or stored in cells as reservoir. Iron is only removed from the body through blood loss, sweating or shedding of mucosal or skin cells. This amounts to an average loss of 1 mg per day for men and 1.5-2 mg per day for women. Women lose more iron, because they regularly loose blood due to menstruation. The amount of iron in a healthy human is kept constant by the regulatory mechanisms of the body. This means that only as much, as the organism looses, is taken up. 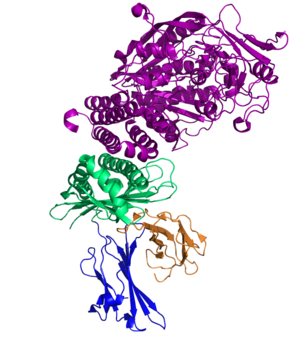 Figure 3: Structure of the HFE protein with bound beta-microglobulin (orange) in complex with the transferrin receptor (purple). The the MHC I domain is colored in green and the immunoglobulin constant domain in blue. PDB ID: 1DE4.

The iron-transferrin complex in the blood plasma binds to the Transferrin Receptors 1 and 2 (TfR), which are expressed by the parenchymal cells of the liver. These receptors start a signalling pathway, involving the binding of the HFE-protein to the transferrin receptors, that activates the production of hepcidin. <xr id="transferrin"/> shows an HFE protein with bound beta-microglobulin in complex with a transferrin receptor.

Although there are some theories about this pathway, it is not resolved yet. Hepcidin is a protein that is responsible for the downregulation of iron entry into the bloodstream, because it initiates the degradation of FPN-1. Therefore, the release of iron into the blood plasma is decreased. The iron uptake and the iron regulation in the human body is summarised in <xr id="iron metabolism"/>. 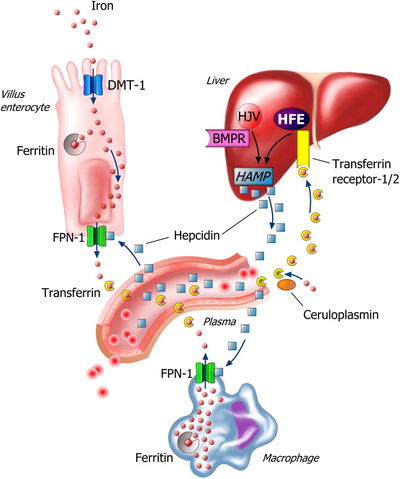 In the most common variant of hemochromatosis, a point mutation in the HFE gene disrupts the hepcidin production pathway. The iron resorption is increased and it accumulates in the body. At some point the body cannot store more iron in the cells and Fe2+ occurs unbound in the bloodstream which damages the body.

Thus, patients do not suffer from a perturbance of the iron metabolism, which works normal, but from an increased iron uptake into the blood.

There are several different types of hemochromatosis. Each disease type is connected to defects in the iron uptake regulation through hepcidin. The most common and less severe type is caused by a point mutation in the HFE gene on chromosome 6. The other types are rare and based on a mutations in the TfR2 gene or, in the case of juvenile hemochromatosis, mutations in the HJV or HAMP (hepcidin) gene. Mutations in the FPN (Ferroportin) gene can also result in hemachromatosis like symptoms, but this type is often termed ferroportin disease. The mutations leads to a hepcidin resistance and thus to an iron hyperabsorbtion from the diet, although the hepcidin production is not impaired in this patients.

Homozygosity for one of the above mentioned mutations only results in a certain predisposition to hemochromatosis, but not all persons with this genetic background develop the disease. It depends on other factors that influence the iron metabolism, such as abusive drinking.

The above described different forms of hemochromatosis are summarised in <xr id="forms"/>.

Hemochromatosis is an autosomal recessive inherited disorder with reduced penetrance in females. The HFE C282Y mutation is very common in white persons with a homozygozity prevalence of 1:200 to 1:300. This is why it is a polymorphism rather than a disease mutation. But among Asians, Hispanics or black persons, it is much less common. Roughly 80% of northern European hemochromatosis patients are homozygous for HFE C282Y. A Celtic or Viking ancester was probably the first person having the mutation. Since hemochromatosis does not affect reproduction, the mutation spread through populations. The reported allele frequency of C282Y ranges from 12.5% in Ireland to 0% in southern Europe, but the mean frequency among white individuals is 6%.

H63D is another HFE polymorphism with less geographic distribution and a higher prevalence of 14%, but it has nearly no penetrance. The S65C polymorphism is associated with high iron levels when it is inherited together with C282Y on one allele.

All the other non-HFE hemochromatosis types are spread throughout the world, independent of any race, but they are much rarer. The G320V mutation in the HJV gene has been detected in 50% of families with a case of juvenile hemochromatosis.

This wiki entry focuses on the HFE C282Y mutation, because it is the most common cause for hemochromatosis in northern Europe.

Figure 5: Illustration of chromosome 6 with the location of the HFE gene, source: http://www.ornl.gov/sci/techresources/Human_Genome/posters/chromosome/hfe.shtml.

The HFE gene is located on chromosome 6 on the short arm (p) in region 21.3 (6p21.3) and consists of 7 exons spanning 12 kb. A graphical representation of choromosme 6 and the location of the HFE gene is shown in <xr id="chromosome"/>. 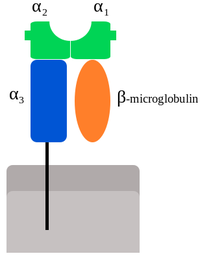 Figure 6: MHC class I molecule consisting of an α1 and α2 domain (green) and an α3 domain (blue). The bound beta-microglobulin is colored in orange.Source

The HFE protein associates with a beta2-microglobulin domain as well. The HFE-beta2-microglobulin complex then is able to binds to the transferrin receptor 2 (TfR2). A guanin to adenine transition at position 845 in the HFE gene lead to the C282Y substitution in the protein sequence. This missense mutation affects a highly conserved cystein in the alpha-3 loop of the HFE protein that normally forms a disulfide bond in the unmutated protein (see <xr id="hfe"/> for a graphical visualisation of the mutation). The tyrosine in the mutated protein therefore disrupts the structure and prevents the binding of HFE to beta-2-microglobulin.

see also the description in

Each of the above mentioned different types of hemochromatosis is caused by a different mutation, see <xr id="causing mutations"/>. 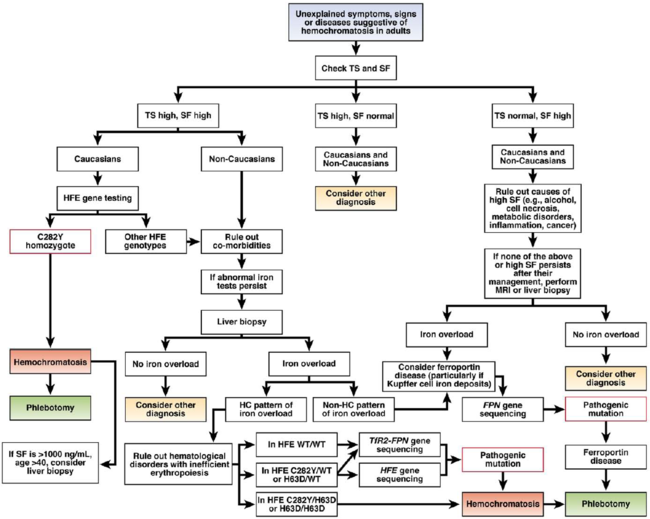 Hemochromatosis is diagnosed in patients with an abnormal high transferrin saturation (TS) and, in later stages, increased serum ferritin levels. The transferrin saturation denotes the concentration of free iron in proportion to the concentration of transferrin in the blood serum. However, the diagnosis should always be supported by a gene test for HFE C282Y homyozygocity. Inflammation, metabolic disorders, diabetes mellitus, alcohol abuse and liver cell necrosis can also lead to an increased serum ferritin level. On the other hand, a finding of normal serum ferritin level always excludes hemochromatosis. The above described diagnosis process is shown as a workflow in <xr id="diagnosis"/>.

Since iron can only be removed from the system by blood loss, the only possible treatment is phlebotomy (bloodletting). It is aimed to reduce the iron content in the body. The first step of the iron-depletion treatment is to induce a slightly iron-deficient state in the body. Therefore, 400-500 ml blood are removed weekly. After 1 to 2 years of bloodletting a serum ferritin level of 20-50 μg/l is reached. In the long term, a maintenance therapy with two to four phlebotomies a year is then enough to keep the serum ferritin level between 50-100 μg/l. A low iron diet can also help to keep the amount of resorbed iron low.

The life expectancy of diagnosed and treated hemochromatosis patients without complications is comparable to that of the normal population. But early diagnosis and initation of therapy is crucial for preventing organ damage and increasing the life expectancy.

liver fibrosis
formation of excessive connective tissue, that deranges the architecture and function of the liver
liver cirrhosis
irreversible end state of a liver disease, that is preceded by liver fibrosis; the liver is shrunk and mostly dysfunctional

arthritis
inflammation of one or more joints, that causes joint stiffness and -pain

gonad
the organ that produces the gametes (sperms and egg cells)
e.g. testes and ovaries in human

The entry is based on several resources: