From the two available structures listed in <xr id="structures"/>, we chose 1A6Z, because it has a slightly higher resolution and a nearly identical R-value compared to 1DE4. On the downside, 1A6Z was resolved at a pH value of 6.5, which is more distant to the physiological pH than the resolution pH of 1DE4. 1A6Z was chosen nevertheless, because it was used in all previous tasks, in order to keep consistency.

</figtable> We chose 5 mutations from the ones described in task 8, some of which are disease causing and some not. They are listed in <xr id="mutations"/>.

SCWRL was used to mutate the HFE protein. The mutated structures are shown and analysed in the following.

Regarding the polar contacts of residue 63, there is no change, because both variants do not exhibit polar interactions (<xr id="63_mut"/>). Also, the mutation lies in a loop region and does not disturb an ordered secondary structure. But nevertheless, the mutation is disease causing, which might be due to the fact that the loop where it is located is still part of the binding interface to ferritin and that the change from an aromatic, mainly uncharged residue to a negatively charged residue disturbs this interface.

Both variants show the same polar contacts, which are only the intra-backbone hydrogen bonds that stabilize the alpha helix (<xr id="97_mut"/>). The isoleucine is slightly smaller than methionine, but the residue stays uncharged and nonpolar and thus, although it is located directly at the binding interface to ferritin, the mutatiion is neutral.

While the change from a polar to a non-polar side chain reduces the number of hydrogen bonds at this loop and thus the stability of the loop (<xr id="217_mut"/>), it is not enough to affect the function of the protein, because the loop is not near a binding interface or an essential structural part.

Although for this mutation, the polar contacts to the neighbouring beta sheet remain unchanged (<xr id="282_mut"/>), it is evident why this mutation is the major cause for hemochromatosis. The replacement of cysteine with tyrosine causes a break of the disulfide bond that connects the two beta sheets of the Ig c1-set domain. Consequently, the structure of this domain is destabilized, which probably inhibits the formation of the HFE,ferritin, beta-micorglobulin complex. It is also noteworthy, that SCWRL does not change the conformation of the cysteine binding partner, resulting in a clash of tyrosine and cysteine.

FoldX was also used to mutate the HFE proteins. The mutated structures from SCWRL and FoldX were superimposed and are compared in <xr id="fx_scwrl"/>

</figtable> To assess the effect of a mutation on a proteins energy relative to its wildtype energy, the ratio between the wild type protein energy and the mutant protein energy was computed. Thereafter, we empirically predicted whether a mutation has a functional effect, based on the energy ratio. As <xr id="energies" /> shows, the energies between mutant and wildtype structures differ only slightly most of the time. Only in the case of the C282Y mutation, a large relative energy difference can be observed. Thus, it can be concluded that the energy difference yields correct hints at the structural effect of a mutation only in extreme cases.

The results of the minimisation runs (see <xr id="minimise"/>) nearly all have their lowest energy after iteration 2. The only exception to this are the C282Y mutant structures and the wildtype structure. The reason for this probably is, that the local minimum is already reached after iteration 2 and the computation of the gradient at a local minimum points to a higher energy state. The method "overshoots" its target. In the case of two consecutive energy increases, the following reasoning might apply: the minimisation first finds one local minimum that it then leaves to reach a second local minimum. But from the second local minimum, it does not find its way back to the first one, but finds a third one with even higher energy instead. The wildtype and the C282Y mutant structures probably reach a local minimum only after the 5th iteration.

When comparing the energies of the mutant structures between the two programs after the first iteration, it stands out, that the energies of the FoldX mutants are always significantly lower than those of the SCWRL mutants. This is due to the additional minimisation step carried out by FoldX. Interestingly, the overall best energy of every FoldX mutant structure is lower than that of the corresponding SCWRL structure. 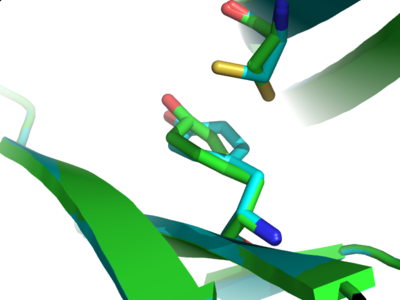 Figure 8: The conformation of the C282Y mutants is shown after 2 iterations of minimisation. The SCWRL mutant strucure is shown in green and the FoldX structure in cyan.

<xr id="282_min2"/> shows that the rotamers for the tyrosine and cysteine residues generated by FoldX and SCWRL are nearly identical after minimisation.

In conclusion, it can be said that FoldX produces better initial results than SCWRL, but after minimisation, there is nearly no difference between the two methods.