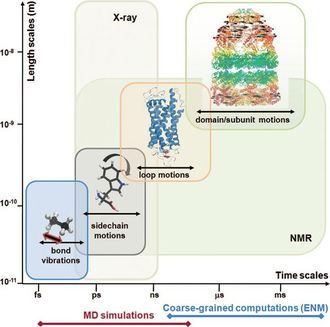 Normal mode analysis(NMA) is used to study the globular motions of a protein. It is useful, because other computational techniques like molecular dynamics are only reasonably applicable for time scales of up to 1 ms. But globular protein motions are slow and often take longer (see <xr id="timescale"/>).

WebNMA and elNemo are two different web servers for normal mode analysis that are based on elastic network models(ENM). Both provide the same information but in different representations:

The modes are only calculated from the C-alpha atoms of the proteins residues. In principal, 3N-6 normal modes could be computed, where N is the number of atoms in the molecule. The reasoning behind this number is, that each atom in a molecule has three coordinates and the molecule thus has 3N degrees of freedom. However, three degrees of freedom have to be omitted to account for translation and another three have to be omitted to account for rotational symmetry. For the HFE protein with 272 residues, 810 normal modes can be calculated, but only the low frequency normal modes are of interest, because they resemble slow motions.

<xr id="elnemo"/> shows the five most most interesting and distinct normal modes of the HFE protein. The first six are omitted because they are of low complexity.

Apart from elNemo, we also used webNMA to compute the normal modes of the HFE protein. The deformation energy of the six first normal modes is given in <xr id="energy"/>. These values, while having no real physical correspondence, give the difference between the energy of the ENM in the input conformation and the energy at full extension of a normal mode movement. They can give a hint on the amount of energy, relative to the other normal modes, that is required to perform a motion.

Although the individual corresponding modes differ slightly, there is no difference between the motion spectrum of the normal modes computed with elNemo and webNMA. Both web servers found the same types of motions. The main difference between the servers is their speed and how they present the results. WebNMA is faster and yielded results for the tested protein in under 5 minutes, while elNemo took several hours. Also WebNMA computes analyses only when requested, thus avoiding unnecessary computation time. 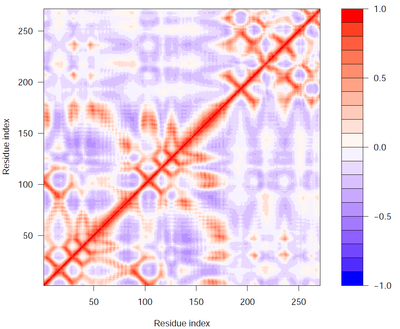 <xr id="corr_motions"/> shows two distinct zones with correlated movement. The first zone starts at the beginning of the sequence and ends at residue 175. The second zone starts at residue 176 and extends until the end of the sequence. Based on this observation, two domains can be assigned to the two zones. SCOP, CATH and Pfam all assign the same two domains to the HFE protein. <xr id="1a6z_domains" /> shows a 3D visualisation of the HFE protein and the MHC I domain (green) and the immunoglobulin domain (blue). This is in complete accordance with the domain assignment based on the correlated motion matrix. 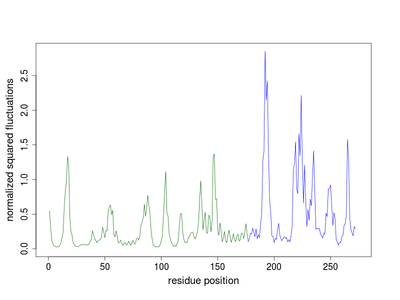 Figure 5: Visualisation of the square of the fluctuation of each C-alpha atom (for all non-trivial modes), normalized so that the sum over all residues is equal to 100. The fluctuations are the sum of the atomic displacements in each mode weighted by the inverse of their corresponding eigenvalues.

The HFE protein contains regions that are more flexible than others. <xr id="fluctuations"/> contains a plot from webNMA that shows for each residue on the x-axis the normalized squared fluctuations. High peaks correspond to highly flexible regions, which are connected by rigid stretches.

Another way to look at the C-alpha fluctuation data is shown in <xr id="3d_fluc"/>. The 3D visualisation of the HFE protein is color coded. More flexible regions (blue) are almost exclusively located at the ends of the protein. On the contrary, the most stable regions (red) are the hinge of the protein, i.e. the stretch, that connects the two domains, and the cores of the two domains.

In comparison to molecular dynamics (MD), normal mode analysis can grasp the slow and globular motions of a protein. Although it can only grasp the harmonic part of these motions, it gives a good insight into them at comparably low computational cost. MD takes the influence of the side chains into account by modeling them explicitly, whereas NMA only takes them into account implicitly through the position of the C-alpha atoms. Thus, MD can model the effect of side chain movements and SNPs on the proteins dynamics, whereas NMA cannot do this.