In this task we've searched several SNP databases to find SNPs for HFE. These SNPs will then be used in the next assignment.

The public version of HGMD contains 88745 mutations total<ref name="hgmd:stats">http://www.hgmd.cf.ac.uk/ac/hahaha.php</ref>. Most (50129) of these are missense/nonsense mutations. HGMD also lists regulatory changes, small and large deletions and insertions, splicing changes, repeat variations, and even complex rearrangements. The database entries come from literature and are manually curated. In contrast to the professional version of HGMD, the public one gets updated with a great delay (2176 additions in the last three years, compared to 34236). The most recent reference for HFE is from 2008, the second most is from 2004. All of HFE's missense/nonsense mutations are supposed to be involved with hemochromatosis or possible side effects thereof (Altered iron status, Diabetes).

The alignment between the sequence (NM_000410.3) used by HGMD and the uniprot sequence for Q30201 had 100% identity. Thus the SNP positions don't have to be adjusted.

The missense/nonsense SNPs can be found here.

The dbSNP web query was introduced Oct 13, 2011, and new submissions (or curations) happen constantly (with the last submission listed as 04/27/2012). Therefore this database should be up to date.

The used methods are listed as a wide variety, mostly PCR and sequencing of DNA done by different groups etc. This means it should be possible to exclude methods or groups you don't trust.

Other than HGMD, SNPdbe is up-to-date (2012/03/05). It combines 1691464 SAASs (Single Amino Acid Substitutions) from 159142 protein sequences and 2985 organisms<ref name="snpdbe:stats">http://www.rostlab.org/services/snpdbe/statistics.php</ref>. Over half (57%) of these are for homo sapiens. The SAASs are collected from SwissProt, dbSNP, 1000Genomes, and PMD. In addition SNPdbe provides effect predictions (SNAP, SIFT), conservation statistics, and references to experimental evidence (if available) for these SNPs.

We've searched SNPdbe with NP_000401 and Q30201 for SNPs in the human genome which listed 35 and 26 results respectively. Some of these hits overlapped though. This resulted in 46 unique SNPs. Both query sequences have an identity of 100% with each other which means that the annotated positions can be used unaltered.
A further search with "HFE" as query yielded another 193 SNPs. This time sequences different from Q30201 were used for the positions. Thus we created a MSA with the T-Coffee Server and adjusted the positions accordingly. This resulted in a final number of 51 unique SNPs for our SNPdbe search.

The SNPs can be found here. For a SNP to be "disease causing" the wild type must have had a conservation of over 40 or hemochromatosis must have been listed as a disease.

OMIM contains information on all known mendelian disorders and over 12,000 genes and is updated daily<ref name="omim:stats">http://omim.org/statistics/entry</ref>. Its focus is on the relation between phenotype and genotype. The entries are based on literature references and are manually curated<ref name="omim:about">http://omim.org/about</ref>.

All of the amino acid mutations have been listed before. The only new information is the single nucleotide polymorphism (5569G-A) in the 4th intron of HFE.

SNPedia currently (June 10, 2012) contains 29135 SNPs<ref name="snpedia:faq">http://www.snpedia.com/index.php/SNPedia:FAQ</ref>. Its based on citing peer-reviewed scientific publications and is updated constantly. SNPedia focuses on SNPs that have significant medical or genealogical consequences, are common, are reproducible, and/or have other historic or medical significance.

SNPedia lists 14 SNPs for HFE. Two of them are redundant as they have been merged into one entry. All amino acid mutations have already been listed in the dbSNP table. The only exception is Rs9366637 which can't be mapped onto the protein sequence as it is located within the first intron. 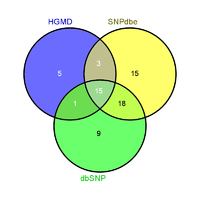 Figure 1: Overlap between the SNPs annotated by HGMD, SNPdbe, and dbSNP.

The Venn diagram in <xr id="overlap"/> (created with Venny) shows that only 15 out of all 66 SNPs are common to HGMD, SNPdbe, and dbSNP. SNPdbe has the most database unique SNPs (15) while missing only 15 SNPs total. dbSNP contributes the second most SNPs (43, with 9 unique to dbSNP). The two most significant mutations for hemochromatosis (Cys-282-Tyr and His-63-Asp) are shared among all databases.

SNPs contained in all databases:

A list of all 66 unique SNPs can be found here.

Figure 3: Distribution of SNPs along HFE's sequence. One column spans about 10 residues.

The distribution of all SNPs along the protein sequence of HFE is shown in <xr id="distribution"/>. Each column spans about 10 residues. The SNPs are more frequent at the beginning and the end of the protein with only 6 SNPs between residue 80 and 150. It also seems that the SNPs' distribution is more spikey than evenly.

A representation of the SNPs mapped onto the protein sequence of HFE is shown below. The color coding is as follows: