Phenylketonuria (PKU) is an inborn metabolic disorder and is caused by different mutations in the enzyme phenylalanine hydroxylase (PAH), which is responsible for the alteration of phenylalanine to tyrosine. Untreated PKU can lead to psychotic disorders and the postnatal development of the brain can be harmed.

PKU results in enrichment of phenylalanine and decrease of tyrosine, whereby other features of the phenylalanine metabolism pathway are affected like the production of melanin. Thus symptoms like fair skin, light hair and blue or sometimes even red eyes can occur. Additionally there can be mousy odour, eczema, epilepsy and perceptible posture changes. In some cases the concerned persons show psychotic disorders, ADHD (attention-deficit hyperactivity disorder), Aggressions, autistic features, Hyperactivity and Self-harm (Self-mutilation).

After birth every child is tested with a newborn-screening, where some disorders are analysed. If a higher concentration of phenylalanine or a bad ratio of phenylalanine and tyrosine is found, PKU is diagnosed and the patient can be treated as followed:

Simplified disease pathway showing that PKU is affected on the beginning of the process thereby causing symptoms of other diseases as well. (Cf. german wikipedia) 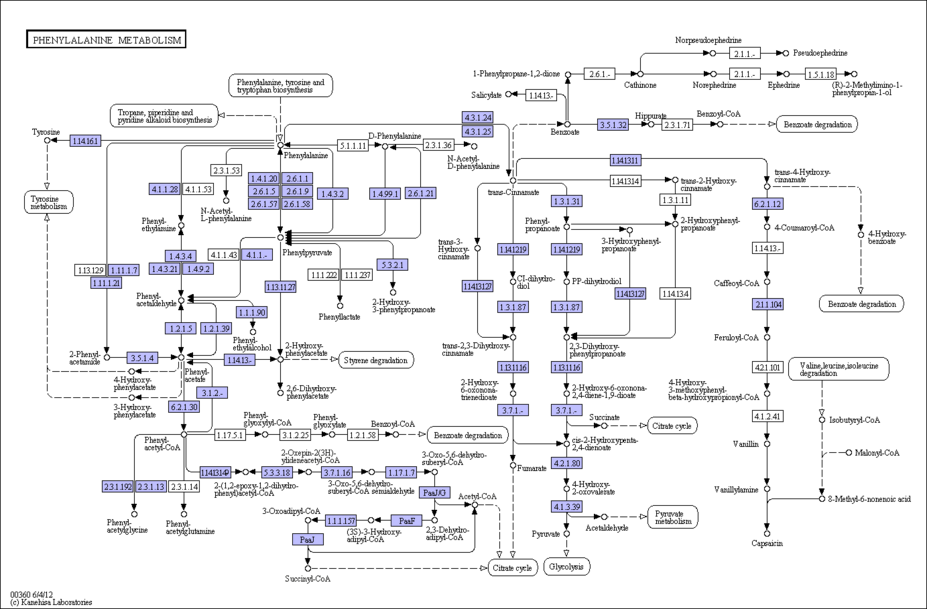 PKU is an autosomal recessive disorder which can be caused by 400 different known mutations on the PAH gene. This gene lies on the human chromosome 12 (<xr id="chr12"/>) and consists of 13 exons. Most common are missense mutations, but also nonsense and silent mutations can be found. Normally the enzyme phenylalanine hydroxylase converts phenylalanine into tyrosine. If this pathway is disturbed, it is transformed to phenylpyruvic acid which constrains pyruvate decarboxylase in the brain (<xr id="hydrox"/>). This seems to be the reason for the mental disorders. 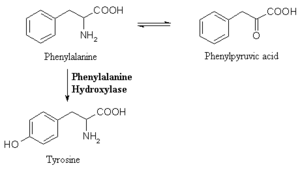 Hydroxylation of phenylalanine to tyrosine and penylpyruvic acid (Davidson College)

The Uniprot entry for PAH P00439 gives the protein sequence used as reference in this practical:

In <xr id="databases"/> most databases containing information about PAH or PKU itself used for this practical can be viewed. For the structures found in RSCB there are a lot of different entries concerning PAH. The two IDs represent the structures used by us. <figtable id="databases">