Metachromatic leukodystrophy (MLD) is an incurable, autosomal recessive inherited disease, which is caused by a mutation in the enzyme Arylsulfatase A (ARS A). It belongs to the lysosomal storage diseases. The deficiency of the enzyme leads to storage of sulfatides and lysosulfatides, which are usually digested by the enzyme. The storage of the lipids glycosphingolipid sulfatide and lysosulfatide cause a degeneration of the white matter in the brain. This part of the brain mainly consists of myelinated axons, which are needed for the proper function of the brain. <ref name="blomqusit2011">Blomqvist, Maria. Gieselmann,Volkmar. Mansson,Jan-Eric. "Accumulation of lysosulfatide in the brain of arylsulfatase A-deficient mice". Lipids in Health and Disease, 2011</ref> Sulfatide is one of many compomnents of the complex composition of myelin <ref name="jeon2008">Jeon, S. B. and Yoon, H. J. and Park, S. H. and Kim, I. H. and Park, E. J.. "Sulfatide, a major lipid component of myelin sheath, activates inflammatory responses as an endogenous stimulator in brain-resident immune cells. J Immunol, 2008</ref>. ARS A catalyses the breakdown and correct incorporation <ref name="wiesmann1978">Wiesmann, U. N.. "[Pathophysiology of sulfatide metabolism in metachromatic leukodystrophy]". Bull Schweiz Akad Med Wiss, 1978</ref> There is no effective therapy available yet and carries of the disease all die. The progression and symptoms of the disease are in general mental and motoric retardation. <ref name="biffi:2008">Biffi, A. and Lucchini, G. and Rovelli, A. and Sessa, M. "Metachromatic leukodystrophy: an overview of current and prospective treatments." Bone Marrow Transplant ,2008 </ref>

Five different allelic variants have been described. Depending on the variant, onset and type of symptoms and progression of the disease can be different <ref name="wikipedia"> http://en.wikipedia.org/wiki/Metachromatic_leukodystrophy </ref>, <ref name="OMIM"> http://www.ncbi.nlm.nih.gov/omim/250100 </ref>:

Arylsulfatase A is located in the Lysosome, where it is responsible for breaking up sulfated Glycosphingolipids (Sulfatides). As the sulfatides are not degraded, they build up and destroy the myelin sheath around the axons. 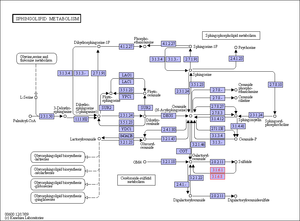 Genomic and structural basis of Arylsulfatase A 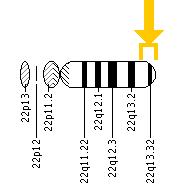 Arylsulfatase A is an enzyme in the lysosome that catalyses the break-up of sulfatides into galactosylceramides and sulfates by acting on the ester bonds.

Arylsulfatase A consists of two subunits A1 and A2 which are connected by a short linker. Both subunits contain a nucleotide-binding-site and they are both needed for proper function of the enzyme. <ref name="zhou:2000">Tongqing Zhou, Sergei Radaev, Barry P. Rosen and Domenico L. Gatti "Structure of the ArsA ATPase: the catalytic subunit of a heavy metal resistance pump" The EMBO Journal ,2000 </ref> 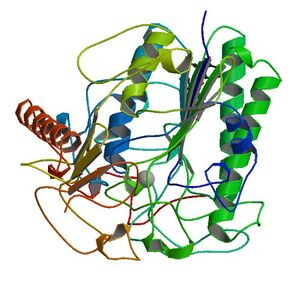 There is no effective therapy avalable yet. Efforts are made to develop and test promising medication for the future <ref name="biffi:2008">Biffi, A. and Lucchini, G. and Rovelli, A. and Sessa, M. "Metachromatic leukodystrophy: an overview of current and prospective treatments." Bone Marrow Transplant ,2008 </ref>:

The reference sequence does not cause the disease and is most often found in the population.