FASTA, BLAST and PSI-BLAST were run against the non-redundant database (NR). HHsearch was run through the web interface<ref>http://toolkit.lmb.uni-muenchen.de/hhpred</ref> against the PDB and Interpro database. The following parameter settings were used:

We wrote a perl script to parse the output files of the individual programs and extracted identifier, alignment score and the percentage of identical residues within the alignment.

The non-redundant database contains entries from various databases, including RefSeq, PDB, PIR, PRF, GenBank and Swiss-Prot. In order to compare results of NR database searches with the results of the HHpred searches, a mapping of the IDs is necessary. Furthermore, the entries in HSSP - which is used later to benchmark the alignment results - contains only references to the UniProtKB accession number (ACCNUM). To overcome this problem we downloaded a mapping table between the IDs from <ref>http://pir.georgetown.edu/pirwww/search/idmapping.shtml</ref>. This table was used - together with some short perl scripts - to map IDs between the databases and compare the results.

In this section, we give a short summary description of the search results of the individual programs and the compare them to each other.

FASTA shows the highest number of alignments, probably due to the fact, that no e-value cutoff was chosen. Contrary, hhsearch has very few alignments. This could be ascribed to the fact that completely different databases were used for the alignments and Interpro and pdb just did not have as much homolguous sequences as the nr database. This is also supported by the benchmark with HSSP (see next section). Another interesting fact is that the results of PSI-BLAST depended for our parameter setting only on the number of iterations. Ragarding the results for the number of iterations, both e-value cutoffs yielded - except of some single exceptions the same aligned target sequences from the database - the same hits. 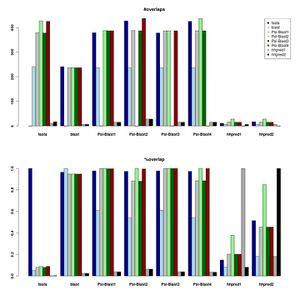 The number of shared target sequences between two methods is shown in the upper panel (self overlaps not shown). The lower panel depicts how many percent of the aligned target sequences of a given method (x-axis) are shared with the other methods.

The results of the four different PSI-BLAST runs show the highest overlap. The additional iterations find more related sequences and yield a higher number of alignments. Interestingly, almost all BLAST hits overlap with the PSI-BLAST and FASTA results. The overlaps of the searches show that the number of hits highly depends on the database. hhpred1 does not have a good overlap with any of the other methods, but hhpred2 shares a significant part of its results with PSI-BLAST.

Scores and identity of aligned residues

In general, the identity of aligned residues is very low, i.e. only very few highly similar hits are detected by the methods. These high scoring matches mainly represent homologs of Arylsulfatase A. This can be seen in the table of sequences which were chosen for the multiple sequence alignment. The majority of hits from an identity range of 99-90% and 89-60% are annotated as Arylsulfatases or Arylsulfatase A. Lowering the identity cutoff yields an increasing number of Sulfatases, which might be more distantly related to our query sequence.
The alignment scores show a very similar distribution. Lowest scores are produced by FASTA, which reflects the low sensitivity of the method for the detection of true homologs. A lot of these matches might be classified as false positive, i.e. they are not evolutionary related to the query sequence. The BLAST scores are a bit elevated compared to FASTA. The highest scores are derived from the PSI-BLAST searches and an increase can be seen when the number of iterations is raised. 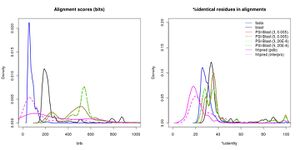 HSSP is a database which contains information about homologuous protein sequences for each protein in the PDB database, which are very likely to have a similar structure as the query. HSSP uses a position-weighted dynamic programming method for sequence profile alignment of PDB entries against the Swissprot database. Therefore the database can also be used to infer homology based secondary structure predictions.
Now we want to use the homology information in HSSP to benchmark our alignment results. The table below depicts the recall and precision of homologs in HSSP of our query by our alignments. FASTA shows the highest recall (92 %), which could lead to the misleading interpretation, that this method performs best. The high value can be ascribed to the fact, that FASTA reports a very high number of alignments - with a lot of false positive - and a selection of true homologs from this results without prior knowledge is quite challenging. This is reflected by the precision of the method, which is only 23 %, i.e. only 23 % of the hits in fasta are true homologs regarding the HSSP annotation.
BLAST perfoms a little bit better than FASTA and PSI-BLAST perfoms best. The latter shows a recall of around 20 % - which is still quite low - but a precision of 65 %, i.e. 64 % of the hits using the PSI-BLAST method are true homologs.
As hhpred was searched against other databases, which contained much less entries than the NR-database used for the other methods, it is not directly comparable to the other results. It performs much worse when hits are compared to all HSSP homologs. But if we only take HSSP homologs, that are contained in the PDB hhpred perfoms best. It even recalls all 12 HSSP "pdb-homologs".

For building the multiple Alignments the following sequences were chosen:

Cobalt is a progressive Multiple Alignment Tool which uses a collection of pairwise constraints which are derived from different databases. To reduce computation time, sequence clusters are formed and then only one sequence out of the cluster is used for finding conserverd domains and motif matches. <ref name="papadopoulos2007">Papadopoulos JS and Agarwala R (2007) COBALT: constraint-based alignment tool for multiple protein sequences, Bioinformatics 23:1073-79</ref>

View of Alignment built by Cobalt, shown in Jalview

View of Alignment built by ClustalW, shown in Jalview

Muscle is a Multiple Alignment Tool that builds a guide tree by an approximation algorithm. Then the sequences are progressively aligned. The alignment is then refined using the calculated pairwise distances. As final step a tree-dependent refinement takes place where the tree is partitioned in two partitions and the profiles for the two subsets are again aligned. <ref name="edgar2004">Edgar, R.C. (2004) MUSCLE: multiple sequence alignment with high accuracy and high throughput.Nucleic Acids Res. 32(5):1792-1797</ref>

View of Alignment built by muscle, shown in Jalview

T-Coffee is a Multiple Alignment Tool that build a MSA progressively. Therefor it uses an 'extended library' where triplet information is saved. Also surrounding information from the MSA is used for refinement. <ref name="notredame2000">T-Coffee: A novel method for multiple sequence alignments. Notredame,Higgins,Heringa,JMB,302(205-217)2000</ref>

View of Alignment built by T-Coffee with standard parameters, shown in Jalview

View of Alignment built by T-Coffee with 3D-coffee, shown in Jalview

For each method used in this section, the number of gapped columns (a column is defined as gapped, if it contains at least one gap), the number of conserved columns (all entries in the row have the same amino acid) and the alignment length were calculated.

ClustalW yields the most compact, i.e. shortest multiple sequence alignment (MSA). It exhibits the lowermost overal number of gaps and number of gaps within the secondary structure of the human Arylsulfatase A. The number of 100% conserved columns consequently decreases a bit in comparison to the other methods. Further on the JalView representation shows the most homogenuous alignment of conserved blocks.

As defined before, we only call a Position conserved if has the same amino acid in all sequences.

As shown in the table above, by only looking at important sites, the alignments are very similar, except the muscle-alignment. So the important sites are really well-conserved also in more distant related proteins.

The computation time differed significantelly between the different programs. 3d-coffee took the most time (as expected) while Cobalt and Muscle where the fastest programs on our testset. 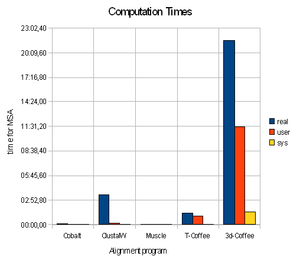