Normal Mode Analysis is a way to predict the dynamics in a protein. Here normal mode analyses are used, since they are very memory reducing compared to typical molecular dynamics simulations. 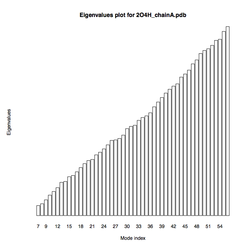 Eigenvalues of WEBnm@ starting with mode 7.

There are several servers available, which can give some indication of movements and dynamics within the protein. There are three main approaches to do this:

The main problem using Molecular Dynamics is the CPU-Power. The calculation of dynamics in a protein depends on the timeframe (micro-, nano-, pico or even femtoseconds). The smaller the timeframe is chosen the better is the prediction in the end, but on costs of CPU Power.
A much faster approach is Normal Mode Analysis (see References). The lowest energy levels always represent the formations the protein is able to make. To calculate the modes, a Hessian Matrix is calculated within the analysis, since its eigenvectors represent the "normal modes". Those with the lowest frequencies (soft modes) are the best normal modes, since they describe the largest movements. The eigenvalues of the vectors are the squared frequencies (compare <xr id="eigen"></xr>). There are also zero-frequency modes, which represent the global movement of the protein (in WEBnm@ and NOMAD the first six). As it can be seen in the results of WEBnm@, the deformation energies, which represent the low-frequency movements are increasing with increasing mode. Taking Elastic Network Models into account, as NOMAD does, the calculation in finding the best energy level to start, is much easier. An elastic network represents a set of harmonic potentials between atoms. The CPU-Power is not affected as much as in Molecular Dynamics, the prediction on the other hand is not as distinctive as in Molecular Dynamics.


For this Task two servers WEBnm@ and NOMAD were used to calculate normal modes of aspartoacylase using the PDB-structure 2O4H. The severs provide different possibilities calculating the normal modes. <xr id="servers"></xr> gives an overview of the differences and similarities between the servers:

Comparison of the servers WEBnm@ and NOMAD with respect to their background, calculation procedure, tools and options.

This section shows the result of WEBnm@. The first column describes the mode. The second shows a vector-like representation on aspartoacylase. The third is the movement and at last displayed is the atomic displacement / fluctuation curve. The atomic displacement / fluctuation curve always shows which atoms do a major movement (not considered directions):

Since aspartoacylase has a bound zinc ion, a comparison using a structure without the ligand was necessary. Therefore the ligand was deleted from the PDB-structure. To check for differences the correlation matrix (<xr id=correlation></xr>) and the normalized fluctuation of the protein (<xr id=fluctuation></xr>) were compared with the ones build for the structure without the ligand. There was no difference detectable. This may be due to the fact, that the zinc is important for the function, however not important as a stabilizing factor and the stabilization that occurs at the active site is determined mainly by secondary structure elements.

NOMAD has the possibility to choose whether the prediction should be calculated on the backbone, only on sidechains, or on all atoms. Here the calculation was done for all atoms. The result for modes 7 to 12 are shown below. The first column describes the mode, the second shows the movement and the third displays the fluctuation curve. As in WEBnm@ the atomic displacement / fluctuation curve always shows which atoms do a major movement (not considered directions). Other than in WEBnm@ here all atoms were taken into account.

Comparing all modes calculated by both methods demonstrates that the least motion happens at the binding pocket of the protein. This is visually detectable from the Pymol representation of the modes as well as from the corresponding fluctuation curves. Especially the normalized fluctuation curve over all modes highlights this observation. Additionally it can be seen that the most flexible part of the protein is the loop region ranging approximately form residue 225 to residue 270. Although comparing the corresponding modes by WEBnm@ and NOMAD does not always result in the same motion, the fluctuation curves do correlate. Looking at the lower numbered modes it may be assumed that there are two domains one being the loop region. However this clear separation of movement blurs into an overall movement of the protein if looking at the higher numbered modes. Therefore it can be assumed that the protein has no separate multiple domains but is made up out of only one domain. Comparing this assumption with the annotations in Pfam and CATH the one domain theory can be validated.