The first step to gain more insight on the genetic level of aspartoacylase (ASPA) would be conducting a sequence search for similar sequences. This is done by performing sequence alignments using ASPA as template.

Pairwise sequence alignments help to find related sequences. In this Task ASPA that is the major cause of Canavan Disease, if it contains specific mutations, is used as input sequence for diverse pairwise sequence alignment methods. The sequence searches were performed with Blast, HHblits, and multiple PsiBlast runs using varying parameters. To get a good and clear overview, diminutives and a color scheme were used to describe and compare all methods (see <xr id="Dimin"></xr>):

As it can be seen in <xr id="Dimin"></xr>, the simple Blast search was done against big_80 as well as the different PsiBlast searches. Big is a single iteration against big (not big_80) but using the checkfile of the 10th iteration of PsiBlast e10. This decision was made because big_80 is already redundancy reduced and may overpredict using many iterations as well as to be able to compare the performance of PsiBlast and HHblits. Since it would be necessary for HHblits to create a special database, it is run with an already existing database of Uniprot.

The next step was evaluating the different search tools. Here it was focused on the e-Value distribution, the sequence identity distribution and the overlap of the found sequences. Since HHblits consists of clusters, the calculations are always corresponding to a complete cluster, not just the cluster representative of Uniprot. This approach was chosen to gain comparable results for Blast, HHblits and Big, whereas Big should reflect a representative for the PsiBlast searches.
As it can be seen in <xr id="eVal">Figure</xr> the distribution of the e-Values found using the different methods is comparable: 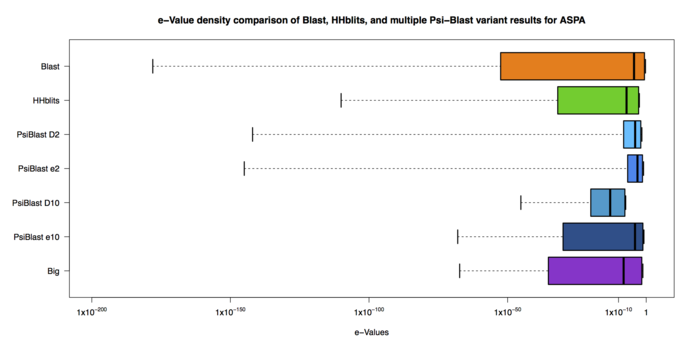 As mentioned above the best way to compare the methods is looking at the graphs for Blast, HHblits and Big (compare <xr id="eVal">Figure</xr>). With a higher number of iterations in the PsiBlast search the e-Value composition gets larger. That is due to the fact that per iteration the specificity decreases as insignificant hits are incorporated into the result. 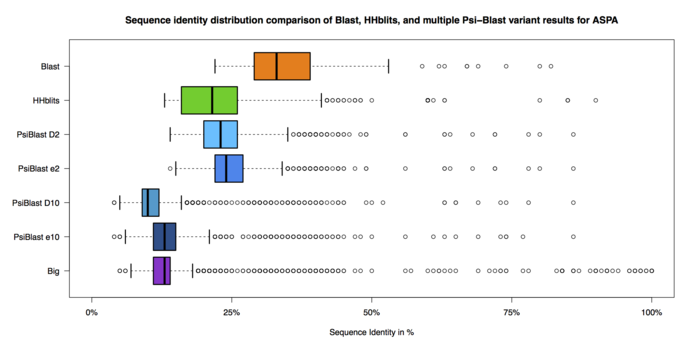 Comparing the distribution of sequence identities for the used methods (see <xr id="seqID">Figure</xr>) it gets visible, that more iterations used for the PsiBlast search result in a lower percentage sequence identity. Again, per iteration the specificity decreases with an increase of not significant hits.

<xr id="Overlap"></xr> represents the overlapping sequence hits between methods. The diagonal shows the number of sequences in the method itself. Again it is important to mention that HHblits consists of clusters. In the table the cluster representatives as well as all cluster members (in brackets) are displayed.

Number of overlapping sequences using different methods. The diagonal (e.g. intersection Blast Blast) corresponds to the number
of sequences found in this search. In HHblits there is a differentiation between cluster representative and complete cluster (in brackets).

For a better overview <xr id="venn"></xr> shows the number of sequences, which overlap between Blast, HHblits and Big: 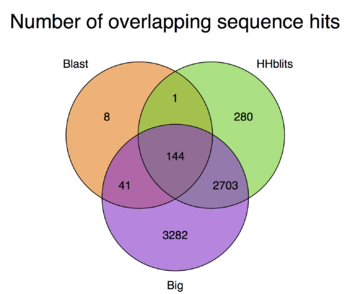 The validation using GeneOntology takes all cluster members of HHblits into account. The resulting intersection of all methods, including the different PsiBlast searches is 142 proteins. For those proteins the GO-Annotations were analyzed. <xr id="GOAnn">Table</xr> shows the top 10 results with a counter (how often they appeared):

Top 10 GO-Annotations among all common proteins of the pairwise sequence alignments
(Blast, HHblits, PsiBlast D2/e2/D10/e10 and Big). Highlighted: aspartoacylase, since it is the major
enzyme causing Canavan Disease.

As displayed in <xr id="GOAnn"></xr>, the top results show the typical associations to Canavan Diseases. The highlighted aspartoacylase activity is the enzymatic reaction of ASPA. As aspartoacylase contains a bound zinc ion, the high occurrence of metal & zinc ion binding is to be expected. Furthermore aspartoacylase is a hydrolase subtype. The last three high ranking GO-Terms are explainable with the fact that L-Aspartate, a chemical compound in the reaction ASPA catalyses, is a prior substrate of the arginine metabolism (Task 01).

To analyze methods for multiple sequence alignments, sets of different sequence identity were built. These sets were built randomly based on the Big data, as it gave the possibility to take PDB-structures into account. The randomly generated sets of sequence identity above 60% and below 30% each contain 10 sequences. The whole range set contains 20 sequences and is a mixture between the above60 and below30 set, since any randomly generated set was around the same average sequence identity as the below30 set. This is due to the very large number of sequence identities below 25% as shown in <xr id="seqID"></xr>.
Concerning the secondary structure, in the above60 set and in the whole range set the same protein was used to calculate the differences (2O4H). It contains information about the active site, binding regions, metal binding sites and simple binding sites. For the below30 set finding a PDB-structure with information comparable to aspartoacylase was quite difficult. The protein Succinylglutamate desuccinylase/aspartoacylase from a bacteria species seemed to be the best for this purpose. Unfortunately only metal binding sites and simple binding sites are annotated in Uniprot for this protein. Therefore no information concerning active site or binding region is available and the conservation of those sites within the multiple sequence alignment could not be detected.

<xr id="MSA">Table</xr> should give a nice overview of the resulting multiple sequence alignments.

<xr id="MSA">Table</xr> describes the number of gaps comparing the consensus sequence of the multiple sequence alignments. Additionally it refers to the number of blocks between those gaps and their average length. At last the number of well conserved columns and columns in general were compared.
To compare the multiple sequence alignment tools with respect to secondary structure and functional residues, <xr id="secstruc">Table</xr> should give an overview: <figtable id="secstruc">

MAFFT is a very fast method producing good alignments: Like MUSCLE it finds blocks and long consensus sequences. This is an advantage for comparing the columns with active sites, or metal binding properties (functional important residues). These are almost all very good conserved throughout MAFFT. Like MUSCLE it performs quite well in low sequence similarity scans, but is better concerning breaks in the secondary structure. Summed up, this method seems to be the most promising one.

MUSCLE performs quite well and finds long blocks. It also brings a long consensus sequence. This also works with only low sequence similarity, but not as good concerning the conserved columns. MUSCLE works not as good as MAFFT concerning the secondary structure breaks. This method is very promising.

The alignment produced by T-COFFEE contains the most gaps and looking at the blocks and columns found, it is comparable to MAFFT. T-COFFEE seems not to be able to handle low to medium sequence similarity scans. It always shows the most number of breaks in the secondary structure elements especially in helices. T-COFFEE is the only method that even misses a functional residue of a binding site.

Instead of 3D-COFFEE EXPRESSO was used for an alignment with secondary structure information. It improves T-COFFEE slightly concerning the low sequence similarity searches, especially in context of conserved columns. In contrast to T-COFFEE it finds at all functional residues, but the results are nearly the same.

As there was no big difference between the below 30% and the original whole range scan, the whole range set was changed to a mixture between the above60 and the below30 set. The overall comparison shows that the sequence identity in the sets definitely influence the alignment: The higher the sequence identity within the alignments the better did the algorithms perform.
All functional important sites as referred either to 2O4H or 3LWU have been detected well. The active site in the whole range set is found, but in lesser conservation. This may be due to the "bad" alignments of the below30 set.
In conclusion MAFFT seems to be the best tool for a good alignment: It shows a good conversation of the aligned blocks, the secondary structure elements and functionally important residues are well conserved.

To give an impression, in <xr id="msaMafft">Figure</xr> one multiple sequence alignment is displayed, showing the set above 60 percent sequence identity on MAFFT using UCSF Chimera:

For reasons of clarity other alignments can be found in the Supplement.