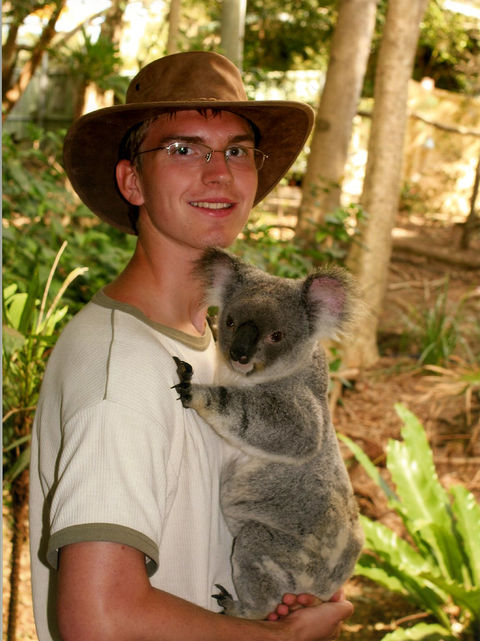 Finally a picture of me... and some strange guy with a hat...

The Tale of Sir Binfo

After endless battles and deadly traps you have finally reached the tomb's final chamber. As you enter it you notice that there is no sign of the treasures that were promised by the old map you found months ago. Suddenly you hear a loud noise behind you and a solid wall of stone blocks the only entrance into the room. You are trapped! You look around and notice something on the walls. On the left wall are four runes in an ancient language. Luckily its the same language as the notes on the map you deciphered and they translate into four single letters:

On the opposite wall you can see four simple symbols:

After further investigation you notice that the four symbols can be pushed into the wall, but you don't know what would happen and which one(s) to push.

What do you do?

After careful thinking you finally decide which Symbol to push and then... nothing...
Did you push the wrong button? What if you're trapped forever? ...But suddendly you hear a loud noise. The sound of stone grinding on stone. A trapdoor opens in the floor and reveals a dusty stairway into the darkness below. As you enter it, magical torches on the walls of a long corridor spring to life and lighten your way. The cobwebs and stale air tell you that this way has been unused for a long time.
After a few minutes the hallway suddenly ends and you stand before a giant door. At least that's what you think it is as you can't find a doorknob or anything else to open it. The only thing you see is a strange circle of runes and a text beside it: 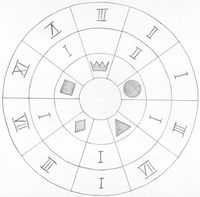 Here we stand. Undefeated, undivided.
We guard this door until united.
Though only one can break us all, for he is King. It seems like you could move the two outer rings of runes (separately). Maybe some kind of combination lock?

It took you over an hour to figure out the right combination, but the door is finally open. The sight is unbelievable. Inside the nex room lies a treasure beyond imagination: heaps of gems, gold, and jewelry. Exotic furs, marvelous paintings, and many more. You step inside to collect what should now be yours...

The moment you reach out for the first piece of treasure it vanishes into thin air. ALL of it. The treasure was just an illusion... You look around and see another entrance into the room. A collapsed one. Across the room is a person, kneeling before another door. You shout... No answer. He didn't even move. As you get closer to him you see that, whoever it was, is dead. His skin mummified due to the dry air. Next to him an old leathery backpack. You reach out to take it as you notice small fragments on the floor. They look like tiny bits of red glass. Now that you're in front of him you also see many of these splinters burried inside the person's flesh. Within the backpack you find several glass orbs: a blue one, a yellow one, a green one, an orange one, a cyan one, and a violet one. Infront of the dead man, at the bottom of the door, you notice three slots. Each of them about the size of the orbs. One of them is red, the second one orange, and the third one yellow...