Following are the structures we have chosen for evaluation of structural alignment methods.

We did not find PDB structure which has a sequence identity between 40% to 90% in comparison to BCKDHA.

RMSD (Å) for structural alignments using different methods are shown in following table (All these structures were aligned to the structure of BCKDHA - 1u5b):

The same tendency can be seen for the LGA_S score, but here the correlations are higher. The LGA_S score shows also a correlation to the probability in contrast to the RMSD.

The signs are opposite for RMSD and LGA_S, because the RMSD is lower for higher similarity, but the LGA_S is higher.

The relationship of LGA_S and E-value, the pair of scores with the highest correlation, for the 10 models is shown in the following plot. 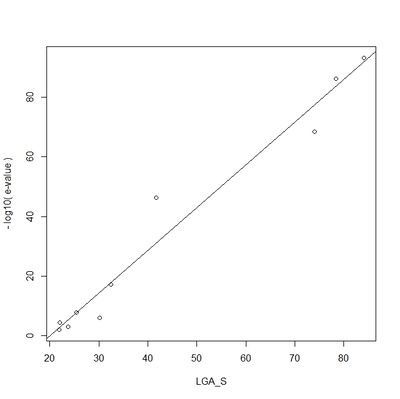 The correlations between structural and sequence alignment scores are as expected. A low E-value indicates a hit that is unlikely to occur only by chance, so it is significant. This means it is related to the query and will have a similar structure. So the RMSD, which measures the difference (root mean squared distance) in the aligned structures, will be low for nearly related proteins. Also if two sequences have a high sequence identity, they will more likely have the same structure, which explains the correlation of RMSD to it. The reason for the observed correlations of RMSD to the alignment scores being weaker than those of the LGA_S score, could be that the RMSD is calculated only locally for structurally aligned residues. So it tends to be too low, because a protein pair which has a very similar part but another dissimilar, not alignable part, would have a low RMSD. For probability the values in the sample do not cover the whole range of possible values, so there was observed almost no correlation to RMSD. We did not take very distant relatives to create structure models, if they had a too high E-value.

All observed local RMSD values vere relatively low and also the LGA_S values were high at least for nearly related structures. So the approach of simply copying Cα atom coordinates of aligned residues from the structure of a related sequence helps to build a model of the unknown structure of a protein.