In Task 8 the sequence of PAH was used for finding mutational effects, now the structure will be taken for these analysis. But how to find out, if a mutation changes the structure? Therefore, one calculates the energy of all atoms for the wildtype and the mutated structure and compares the results for changes. There are two different methods for this calculations given: Quantum Mechanics (QM) and Molecular Mechanics (MM). In QM the energy of all electrons in a protein is calculated. It is one of the most accurated methods, but it is very time consuming. In MM the energy of a system is calculated as a function of nuclear positions. It is very fast and easy to calculate, but it ignores electronic motions and is not as accurate as QM. Since QM is too time intensive and the results of MM are nearly as good as the ones calculated with QM, we use MM for the further analysis. Molecular Mechanics uses force fields for the energy calculation, which is defined as a sum of terms. The terms are non-bonded (electrostatic and Van-der-Waals) and bonded (Bond stretching, Angle stretching, bond rotation) interactions. <ref name="molmech"> Andrew R. Leach (2001): "Molecular Modelling: Principles and Applications (Second Edition)". Prentice Hall, ISBN: 9780582382107. </ref> For the structure based mutation analysis the tools SCWRL and FoldX were used.

To check which protein structure to use for further analysis, we compared the constraint data for all sequences given in the PAH (P00439) Uniprot entry. <figtable id="pro-struc">

Comparison of all pdb structures of P00439 in the used method, Resolution (in Å), R-factor, pH, included Gaps and chain/s, positions in P00439 (PAH) and the coverage to this sequence.

</figtable> All structures do not cover the whole PAH protein (coverage = 100%) and were found with the X-ray diffraction method. In <xr id="pro-struc"/> we can see, that the structure of 1J8U has a better resolution value as well as R-factor than the other structures. Although 2PAH has a better pH-value, a higher coverage and even two chains, however, the structure includes one gap. For this reason as well as the better R-factor and higher resolution value, we have chosen the structure of 1J8U for further analysis. 1J8U is the catalytic domain of human phenylalanine hydroxylase Fe(II) and does not contain any gaps. Moreover, the structure includes the second highest coverage and also a very good pH-value.

Following five mutations from the previously selected mutations in Task8 are mapped to the crystal structure:

For the conversion of the residues, which include a mutation, we used the Mutagenesis tool in PyMOL. A little overview of the mutations is located in the next subsections with associated figures. 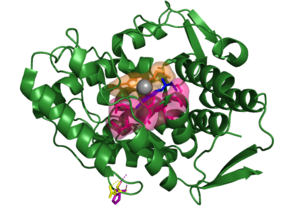 Mutation of glutamine (yellow) to histidine (purple) with their polar contacts located at position 172 of 1J8U (green). The ligands and binding sites are shown in the same colors and representations as given in Figure 1 and 2.

</figure> This mutation is located on a coiled region far away from any of the two binding sites (see <xr id="Q172H"/>), so one would not expect a huge effect on the protein. This would confirm our assumption from last weeks task that this mutation is neutral, although this mutation contains only two of the three polar bonds of the wildtype residue. 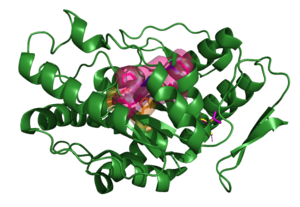 Mutation of alanine (yellow) to valine (purple) with their polar contacts located at position 259 of 1J8U (green). The ligands and binding sites are shown in the same colors and representations as given in Figure 1 and 2.

</figure> As one can see in <xr id="A259V"/> this mutation is lying in moderate distance to both binding sites. In comparison to Task8 lies the mutation here exactly on a helix and not directly beneath one. The reason for this change is the different protein structure we used for both tasks (2PAH in Task8 and 1J8U here). Even if it is not very close to any of the binding sites and both polar contacts of the wildtype residue remain in the mutation, we assume that this mutation is disease-causing. 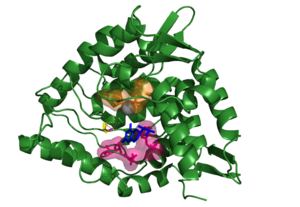 Mutation of threonine (yellow) to alanine (purple) with their polar contacts located at position 266 of 1J8U (green). The ligands and binding sites are shown in the same colors and representations as given in Figure 1 and 2.

</figure> In <xr id="T266A"/> we can see, that this residue is not located directly to the binding sites, but it lies between both ones. In last weeks task Thr266Ala was lying on the end of a helix, but here it can be found on a coiled region. Regarding the near location to the binding sites we would expect that this mutation is disease causing. Like in Gln172His this mutation does exhibits only two of the three polar contacts of the wildtype residue. 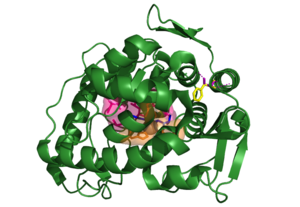 Mutation of phenylalanine (yellow) to serine (purple) with their polar contacts located at position 392 of 1J8U (green). The ligands and binding sites are shown in the same colors and representations as given in Figure 1 and 2.

</figure> Since this mutations lies far away from both binding sites (<xr id="F392S"/>), we would expect only a small effect on the protein. But we think this mutation is disease causing, as it is located on the beginning of an alpha-Helix and has two polar contacts more now than the wildtype one. Moreover, both residues do have a very different structure and the prediction tools of last week were all unanimous that this mutation affects the protein. 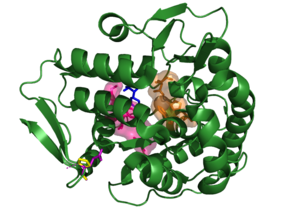 Mutation of proline (yellow) to glutamine (purple) with their polar contacts located at position 416 of 1J8U (green). The ligands and binding sites are shown in the same colors and representations as given in Figure 1 and 2.

</figure> In this <xr id="P416Q"/> we can see, that the mutation is also far away from the binding sites as Phe392Ser. So, we would also think that it has not a huge effect on the protein. Like before, the tools of last week predict this mutation as non-neutral. Furthermore, the wildtype residue of proline on position 416 has no polar contacts to any other excluding solvent, but the mutation has one included. We therefore think that this mutation is disease-causing.

The big difference between the SCWRL structure and the wildtype one is that SCWRL includes H-atoms, which the other structure does not have. This is the reason, why sometimes the bonds look different although they are from the same location (if the H-atom is not in the SCWRL structure included).

Now, we want to compare the results of SCWRL and FoldX. Therefore, we loaded the pdb structures into PyMOL and looked after differences between the two results. There was only one change in the 3D structure of the two programs, which can be seen in <xr id="comparison_all"/> and <xr id="comparison_part"/>.

We also compared the two structures with the wildtype 1J8U structure and there are some little changes, but the interesting part was the change between SCWRL and FoldX. FoldX has the beta strand on the position of the wildtype structure whereas the one of SCWRL has changed. Since it is only a small difference in the structures, we do not think, that it has a huge consequence for the protein.

It is also very interesting, which changes the SCWRL (purple) and FoldX (teal) outputs show in each mutation. Hence, we want to analyse every mutation on its own. We also added polar contacts to the mutations, which can overlap and therefore sometimes not be seen for both tools.

All in all one can see, that SCWRL has hydrogen atoms in the structures included, which FoldX does not. Furthermore, do all mutations got a slight twisting. But in the whole, there are only small changes between the two tools.

In this part the energies of the wildtypes and the mutations are compared for both SCWRL and FoldX. Thereby <xr id="scwrl"/> contains all results as well as the predictions made due to those energies. <figtable id="scwrl">

Comparison of the SCWRL and FoldX energy results between the wildtype and the mutant structures.

</figtable> For the mutation of Q172H we do not surely know if it is a neutral or non-neutral one. However, since the sequence structure prediction in last weeks task got the same results as given here, we guess that this mutation is really neutral. The SCWRL prediction of A259V shows very clear a disease-causing mutation, although in FoldX we would not expect something like that. Nevertheless, we know, that this mutation is really non-neutral from the HGMD website. The mutation of T266A is actually disease-causing, but we would expect a neutral mutation with both tools. This situation is different with the F392S mutation, since we would expect a non-neutral characteristic in both tools. However, we are not sure, if the SCWRL prediction is meaningful enough. The last mutation of P416Q is also non-neutral, but this time SCWRL did not predict a disease-causing whereas FoldX does. Both tools are very difficult for the prediction of disease-causing mutations, since one does not really know at which cutoff a mutation is predicted as non-neutral or neutral as well as both tools are not very steady.

The Minimise tool is used to minimise the energy of a model. In the table below, the energy for all five runs of minimise are given. Since the SCWRL output could not be minimised, we only can see the difference between the wildtype (WT) and the five mutation structures constructed with FoldX. The results can be viewed in <xr id="minimise"/>. <figtable id="minimise">