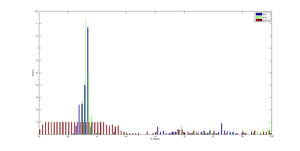 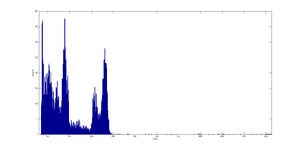 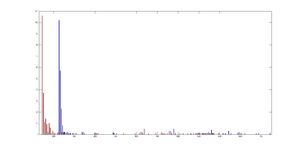 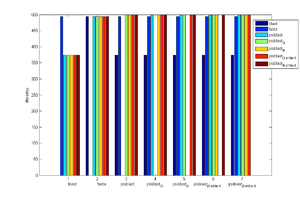 Figure 4: overlap between all methods

To find homologues sequences which are adequate for a template based structure prediction, we used different alignment tools like BLAST, FASTA and PSI-BLAST, for the search in a non-reduntant (NR) database. Because of the absence of the database in hmm format, we decided not to integrate the hhpred web-results. These results are not comparable because of the different database structure.

We called BLAST and FASTA with the standard parameters.

To compare the different alignment tools, we looked at the distributions of the identity and the scores of the results. The results are shown in Figure 1 to Figure 3. While PSI-BLAST found an equal amount of homologues in the range around 20% to 40%, FASTA and BLAST found more homologues with an identity around 35%. In total, we obtained more results with a lower sequence identity while using PSI-BLAST and more close homologues while using FASTA and BLAST. In the score distributions, we see, the most results found by FASTA are in a range from 20 to 200, while in the case of BLAST and PSI-BLAST the most results are in a range from 150 to 250. We can now propose that, in our case, PSI-BLAST has an advantage to find more distant related proteins, while BLAST and FASTA find more close related proteins.

We also compared the runtime of the different tools. Surprisingly for PSI-BLAST, in our case, the e-Value and the number of iterations had no impact on the results (see Figure 4), so we used PSI-BLAST with standard parameters for the comparison.

As we looked for an overlap between the reference sequences given by HSSP, no overlap occurred. The HSSP reference is given with UniProt AC, so we mapped the ID's on the GenBank ID's using PIR<ref>pir.georgetown.edu/pirwww/search/idmapping.shtml</ref>. Than we compared the id's without any result. We also mapped the PDB id's found by FASTA to UniProt. Here we found a small overlap of about 34 Proteins. But the main issue is, that the highest identity given by a pdb entry is about 40%. So we found just week homologues templates for a later structure prediction.

Figures 5 to 7 show the overlap between the different result sets. Figure 5 shows the overlap between the results of FASTA, BLAST and PSI-BLAST. Here we can see a strong overlap between the different methods. In the case of FASTA, no limitation in the amount of results which are found was set. In the case of BLAST and PSI-BLAST, this restriction is set to 500 as a standard value. Figure 6 shows that we were not able to find any protein from our reference set by searching with an alignment tool. The reference set contains proteins which are from HSSP proposed to have a homologue secondary structure. In Figure 7, we show the overlap between the proteins found by the search with the global alignment tools for which were able to find a PDB id's also in the reference set. Interesting here is, that the same sequence can have different id's in the same database but is assigned to the same PDB id. So in total, we could find 34 sequences with a 3D-Structure.

For the multiple sequence alignment we used the following sequences.

The first results were not suitable, so we excluded the two sequences which causes the most gaps. These gaps were due to the different length of the sequences. Both sequence had just a length of around 120 amino acids. Therefore, they caused the insertion of long strands of gaps that lead to badly conservated regions.

Excluded sequences from all MSAs:

Thus we have no more sequences in the region of 99 to 90% sequenced identity, but the one we had was only a fragment and therefore only partial useful for an alignment. Without these sequences our alignments and other analysis should get quite better.

All programs except cobalt were preinstalled at our VM. Cobalt was downloaded from ftp://ftp.ncbi.nlm.nih.gov/pub/cobalt/executables/2.0.1/ (file depending on system architecture) and extracted. Afterwards the current directory was changed to ~/usr/bin and a symbolic link was created (ln -s <extracted-cobalt-runnable> cobalt).

The MSA is shown in Figure 8.

The MSA is shown in Figure 9.

The MSA is shown in Figure 10.

The MSA is shown in Figure 8.

Unfortunately were we not able to run the 3dcoffee, because it crashed everytime. Therefore we used -mode expresso.

The MSA is shown in Figure 12.

All programs worked fine and produced a tight aligned part from the mid to the end (position ~170 to 390) with high conservation and of good quality. Without the two short sequences, all extremely gapped parts in the alignments disappeared. Even the use of the structure supported alignment at t-coffee resulted in an nice alignment. But our best pdb entry was at ~40% sequence identity, so gaps had to be inserted in order to incorporate the structure. This issue affects also the following sections, like the amount and quality of conserved regions or the amount of introduced gaps.

All programs except the special mode of t-coffee have an clearly obvious gap between ~160 and ~170, by expresso it is between ~190 - ~200. That gap is caused by insertions at the hfe protein in the rat and mouse.

But in order to present a visible result, we used the conserved region calculation of JalView.

The values ranges from 0 (no conservation at all) to 11 (full conserved row).

It is clearly visible that all our alignments have a large region of bad conservation in the beginning of the alignments, probably a region of no functional importance. After position ~160 to ~200, a large block of medium to good conservation is visible. Maybe that part contains the biological function or important domains. This block ends around position ~340 to ~400.

Around .4 to .7 percentage of the alignments are no conservation and therefore gaps or many mutation. It it logical, that t-coffee expresso produces the most non-conservations because of the additional constraint to use the structural information.

We used the information available at UniProt for determining functional important residues and regions.

We excluded all domain and other regions, because they are of no use this time. The only important functional positions are the position of the glycosylation and the both position of the disulfide bond.

We are using the conserved region index from JalView again, cX stands for the value of conservation at this position. One can see, that the conservation of the glycosylation is only low to medium, so not important for the function of the protein. All disulfide bonds, except in expresso are perfectly conserved, that could be a result of a slightly different folding with maintaining the linking between the both cysteine residues.

There are very less gaps in the reference sequence in fraction to its length of 348 aa. Only both of the t-coffee variants create more gaps. We do not know why the standard version produces also more gaps, but we are sure the expresso mode has to follow the constraint to align two position only if the structure matches and thus inserts more gaps.

The vast majority of the gaps were in regions with no important secondary structure and therefore broke nothing. Every alignment broke also some of the beta strands but only t-coffee (expresso) broke an helix totally. Cobalt also broke the leading turn into the helix, but not the helix itself. We were surprised by expresso, because it incorporated the secondary structure in the alignment and thus was the method, that must absolutely not brake the helix.