by Benjamin Drexler and Fabian Grandke

In this task, we performed homology modelling of the protein α-galactosidase A with the programs MODELLER, SWISS-MODEL, iTasser and 3D-JIGSAW. Homology modelling relies on the following two assumptions. First, the structure of the protein is determined by its amino acid sequence. Second, the structure of a protein is more conserved than its amino acid sequence. Usually one performs homology modelling of a protein which structure is not known. In this case, we have several PDB structures of the α-galactosidase A available and hence we are able to evaluate the resulting models of the programs afterwards.

The following table lists the best ten hits of the HHpred search of Task 1. We used 3HG3 (97% identity), 1KTB (53%) and 3CC1 (34%) as templates for the modelling process. This selection covers a wide range of sequence identity and hence we are able to evaluate how the sequence identity influence the quality of the models. 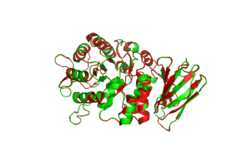 The differences between 1R46 and 1R47 are very marginal (see figure 1) and hence we did the visual comparison with one structure, i.e. 1R47.

The numeric evaluation involves the calculation of several scores.

The root mean square deviation (RMSD) value between the model and the reference structure was calculated by the webserver of TM-align.

The calculation of the RMSD in the catalytic site was done by PyMol. We used the annotation of the UniProt entry to determine the active sites, which are Asp170 and Asp231. We applied the following workflow:

At first, we used the command line TMS to calculate the TM-Score, but the values seemed to be wrong, i.e. way too low.

QMEANscore4 ranges from 0 to 1 and indicates the reliability of the model. The Z-score describes the absolute quality of the model and is calculated by comparison to reference structures.

The C-Score is calculated by I-TASSER and is a confidence score that is based on the significane of the alignments and the convergence parameters of the structure assembly simulations. The C-Score typically ranges from -5 to 2 and a high score indicates a model with a high confidence.<ref name=itasser_cscore>C-Score explanation</ref>

MODELLER is a program to produce three-dimensional protein structures based on homology or comparative modelling. The user has to provide the sequence of the protein to be modeled and the structure and sequence of at least one related protein that is used as a template. MODELLER uses all atoms of the template protein, but the hydrogen-atoms. We used MODELLER as described in the tutorial Using Modeller for TASK 4. Therefore we had to align both sequences and convert them into pir-format. This alignment is given as input together with the template pdb-file. Unfortunately the input file has to be provided as python file. <ref name=modeller>http://salilab.org/modeller/</ref>

In this section, we used a pairwise alignment between the template (i.e. 3HG3, 1KTB and 3CC1) and the target as the input for MODELLER. All three models fairly match the structure of 1R47 (see figure 2). The model of 3HG3 seems to be the best (see figure 2A), closely followed by the model of 1KTB (see figure 2B). The largest deviations in respect to the reference structure can be observed in the model of 3CC1 (see figure 2C), especially in the coil regions of the protein. 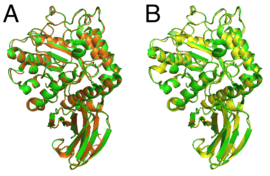 Both, the model of the unsupervised and supervised MSA, perform very good. They fit the reference structure very good and there are almost no deviations (see figure 3). Considering the numeric evaluation, the MSA models are even better than the model of the 3HG3 template. It is noteworthy that the exclusion of the two sequences with a low sequence identity slightly decreased the quality of the model. So it seems like that there is a benefit in including sequences with a low identity. Another explanation could be that the unsupervised had two more sequences in the MSA and hence the quality of the model is better. After all, the results indicate that it is a viable option to do the modelling with an MSA.

Figure 4: A schematic representation of the I-TASSER protocol for protein structure and function predictions. The protein chains are colored from blue at the N-terminus to red at the C-terminus.<ref name=itasser_roy>Ambrish Roy, Alper Kucukural, Yang Zhang. I-TASSER: a unified platform for automated protein structure and function prediction. Nature Protocols, vol 5, 725-738 (2010).</ref> 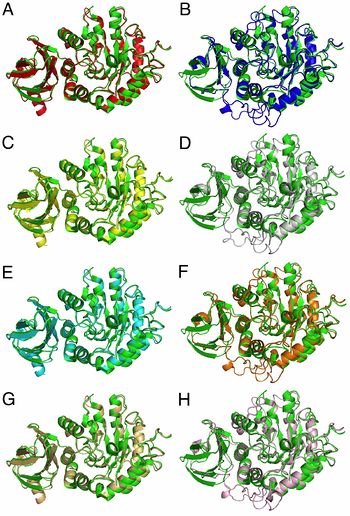 Figure 4 shows, that iTasser takes an amino acid sequence as input and tries to retrieve template proteins from PDB. In the next step fragments from the the templates are reassembled to a complete model. In the last step, the model is reassembled by taking energy calculations into account. Additionally biological function prediction is done, but that was not of interest of this task<ref name=itasser1>http://zhanglab.ccmb.med.umich.edu/I-TASSER/about.html</ref>. I-TASSER was developed by Zhang et. al in 2007<ref name=itasser_zhang>Yang Zhang. Template-based modeling and free modeling by I-TASSER in CASP7. Proteins, vol 69 (Suppl 8), 108-117 (2007)</ref><ref name=itasser_roy>Ambrish Roy, Alper Kucukural, Yang Zhang. I-TASSER: a unified platform for automated protein structure and function prediction. Nature Protocols, vol 5, 725-738 (2010).</ref>.

We used the iTasser-server in two different ways:

We used 3HG3, 1KTB and 3CC1 as the PDB-ID input in run 1, 2 and 3 respectively. Run 4 was performed with the standard parameteres. It seems like that these chosen options did not influence the outcome in our case which could be an error in the usage of I-TASSER on our side.

We received in every run two models as a result. Acoording to the visual (see figure 5) and numeric evaluation, the first result (referred as model 1) of every run is almost identical and the same applies for the second result (referred as model 2). Model 2 is always worse than model 1, but is still pretty decent. A closer look at the visual representation reveals, that these models always have a problem with four beta-sheets (on the left side) that are instead modelled as a coil region. It can be observed that 3 out of 4 "model 1" have the same C-Score, whereas the TM-Score and RMSD values allow a further distinction.

Overall the results are very good, but this is probably due to the fact that we were not able to exclude the selfhit even though we restricted the modelling to a certain template.

Figure 8: Representation of the resulting model of SWISS-MODEL which used the PDB structure 3CC1 as a template and the reference PDB structure 1R47. The model is in superposition to the reference structure (green) and are shown in cartoon representation. It was not possible to build a model with the automated mode of SWISS-MODEL and hence there is only a model of the aligned mode (magenta).

We used the swissmodel server with two different options:

In this section, we deal with the model based on 3HG3 as the template. Both models, the aligned and the automated one, match close to perfect the reference structure (see figure 6). The numeric evaluation confirms these obversations. The TM-Score is close to 1 which indicates a very good model. Additionally, the values suggest that the two models are almost identical. Hence in this case, it does not make a difference whether the aligned or the automated mode was used.

Unfortunately SWISS-MODEL was not able to perfom the automated modelling with 3CC1 as template due to the low sequence identity. We received the following message:
building model based on 3cc1A (1-390) was not successfull go to next best template

Hence we are only able to evaluate the result of the aligned mode. In comparison to the results of the other two templates, the model of the 3CC1 template has the greatest differences to the reference structure (see figure 8). Nevertheless the TM-Score is still pretty decent. The RMSD values are overall the highest and just like in the model of the 1KTB template, the RMSD value of the catalytic site increases. It is clearly recognizable that the quality of the model suffers from the low sequence identity.

3D-JIGSAW is a program that takes already calculated models as input and tries to improve these. For this, we had to create a single pdb-file that contains all the models which should be incoporated. We used the webserver of 3D-JIGSAW for our calculations.

Because we also used a template with a sequence identity to calculate the models with the other three programs (MODELLER, I-TASSER, SWISS-MODEL), we received models which were very accurate through out all programs. Since their TM-Score was already very close to 1 and the RMSD values close to 0, 3D-JIGSAW is probably not able to improve these models anymore. Therefore we decided that we also compile a second set of models that were mediocre and hence we will be able to evaluate whether 3D-JIGSAW is able to improve a set of models. This set is referred as the "mediocre models" one and the set of the best models is the "good models" one.

This set contains the following models:

The visual comparison (see figure 9A) and the numeric evaluation suggest that the resulting models of 3D-JIGSAW are almost perfect. This is not surprisingly, since the input was a set of very accurate models and there was no improvement as assumed.

This set contains the following models:

3D-JIGSAW provides five models as output, where model 1 is superior according to the TM-Score, RMSD and the energy calculation and hence we conclude that this model is the best overall. The visual representation also suggest a pretty decent result, but it seems like that the model fails escpecially with some beta-sheets at the C-terminal (see figure 9B). Surprisingly, it is outperformed by some models in the RMSD of the catalytic site. Taking model 1 as the reference for this run, 3D-JIGSAW was not able to provide an improvment in respect to the set which was given as an input.

In this task, we used four different programs (i.e. MODELLER, I-TASSER, SWISS-MODEL and 3D-JIGSAW) to model the structure of the human α-galactosidase. Three templates that vary in the sequence identity from 97% to 34% and two multiple sequence alignments were used. The resulting models of the runs with the 97% sequence identity template (PDB ID 3HG3) produced almost perfect models in respect to the reference structure and hence suggest that homology modelling is able to generate correct models in general. It will be rarely the case that there is a template with such a high sequence identity available in real world applications. Therefore we discuss the results of the templates with a lower sequence identity.

The template with a sequence identity of 54% (PDB ID 1KTB) was also able to provide a basis for the homology modelling process, so that the resulting models had a very good quality in general. Some of the models were only slightly worse than the models with 3HG3 as template which emphasises the capabilities of homology modelling, i.e. that a template with a lower sequence identity is also able to generate good models. In contrast, the models based on the sequence with the lowest identity (34%, PDB ID 3CC1) show a noticeable loss of quality. In this case, it seems like that the difference of about 40% sequence identity between 3HG3 and 1KTB does not affect the quality of the model that much, whereas the difference of 20% between 1KTB and 3CC1 leads to an quite observable loss in the quality of the model. It needs to be mentioned that these observations could be biased by the selection of the templates. Since most of the time a sequence alignment is involved, the sequence identity is not the only factor to take into account.

In respect to the numeric evaluation, we made the observation that RMSD value of the catalytic site was most of the time significantly lower than the overall RMSD. This could be due to the fact that conservation of the catalytic site is higher than in other regions in general. We have to remark that the calculation of the two different RMSD values was done by two different programs. Therfore this would require further examination to get more confidence in this observation.