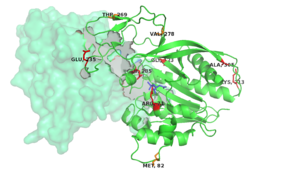 We use the same mutations for this analysis as for the sequence based mutation analysis.

As a struture we used 2O4H which was crystallized as a dimer (see protocol for further info). For our analysis we will only consider chainA.

In <xr id="aspa_mut_overview"/> you can see an overview of the Aspa structure with the mutations mapped onto the structure.

In <xr id="mutation_vis_table"/> we analysed each mutation seperately regarding to its location in the structure. We also compared the Scwrl output to the Pymol mutation output, that we created manually via the mutagenesis plugin. In cases, where the residue in buried and there are restrictions in space there are hardly differences between the Pymol and the Scwrl output. Especially, since Scwrl only chooses the best suiting rotamer and inserts it into the structure without further optimising the mutated structure, one cannot expect large differences. Only for solvent exposed residues on the surface of the protein, there are a lot of degrees of freedom and Scwrl chooses different rotamers.

In general one can say, that FoldX and Scwrl result in the same choice of rotamers. Only for solvent exposed mutant residues there are differences. However when not only looking at the mutant residues, one finds, that foldx also optimizes the conformation of neighboring residues. In one extreme case, foldx chooses a rotamer for a neighboring residue, that is rotated 180° compared to the original position (compare C218 in mutation A305E). This is due to steric hindrance of the mutated residue glutamic acid, that is significantly larger than the original residue alanin.

In the following you can see the energies that Foldx calculated for the Wildtype protein.

In general, one can say, that after the first minimization round, the foldx structures had slightly better energy scores:

For all structures, except for one, the energies became higher after five times minimizing them:

In <xr id="plot_minimise"/> the distribution of the energy scores is visualized. It can easily be observed that the energy difference between the mutations are only minor. For each mutation it was possible to minimize the structure, so that is has comparable values to the wild type structure. Hence, from these small differences in energy one cannot infer the severety of one mutation.

We investigated the structures and found, that Foldx chose a different conformer for the neighboring residue C218 of the mutant residue E305 (as already mentioned in <xr id="mutation_vis_table"/>) to avoid steric clashes. Scwrl did not do that. However, after five minimization rounds, C218 and other neighboring residues got moved as well, to avoid the steric clash. So this might be the reason, why the Scwrl structure has a lower energy after five minimization rounds than compared after only one round.(compare <xr id="compare_a305e_min"/>)

Yet, a lot of other residues have been moved as well in the minimization procedure and it exceeds the purpose to investigate all changes that occured.

Scwrl and foldx produced very similar results in our case, so we did not favour one over the other as an input for gromacs and simply chose the scwrl models. fetchPDB is a script that uses wget to download a pdb file for a given identifier.
For repairPDB, we used option -jprot to extract the protein only. Other options include removing hydrogens or waters, renumbering the sequence, extracting the DNA, selecting individual chains etc.
We called Scwrl4 again to make sure there are no chain breaks, and then proceeded with the instructions given in the task description. For more detailled info on our calls, please check the protocol.

The minimisation took between 212 and 363 steps until it converged.

From <xr id="gromacs_energies"/>, it is interesting to notice that the average bond energy is much lower for the wildtype compared to all mutations.

The same, however, does not hold true for the angle energies - these are much closer to each other.

There is a definite change in potential for the mutations as can be seen in the table above. However, values vary greatly, and it is therefore difficult to generalise or define a cutoff. Additionally, some disease-causing mutations have a lower potential difference than those who are not disease-causing.

In general we find it very hard to draw conclusions just from the score. As can be seen from the Gromacs and Minimisation results, there is no correlation between deleterious mutants and the energy of the structure. Yet we feel, that this result is not surprising. A deleterious mutant might as well have a good structure but still be unfunctional. The functional implications do not necessarily go along with structural defects.

Only major deviations in the energy of the structure, as it was the case for the Scwlr mutant structure for A305E give a hint, that there definitely is something wrong.