WebNM@ is a Normal Mode analysis tool developed by Hollup, Sælensminde and Reuter. It is one of the methods uses that only look at C_Alpha atoms. We ran it on our protein (PDB Code 2O53) using the default settings and using all chains.

These are the deformation energies computed by WebNM@:

Since the actual energy of the protein is a composite of all the normal modes (after all, all of the motions happen simultaneously), comparing the energies is of little significance. What does meet the eye, however, is that there is a fairly steady increase of energy with higher normal mode numbers. 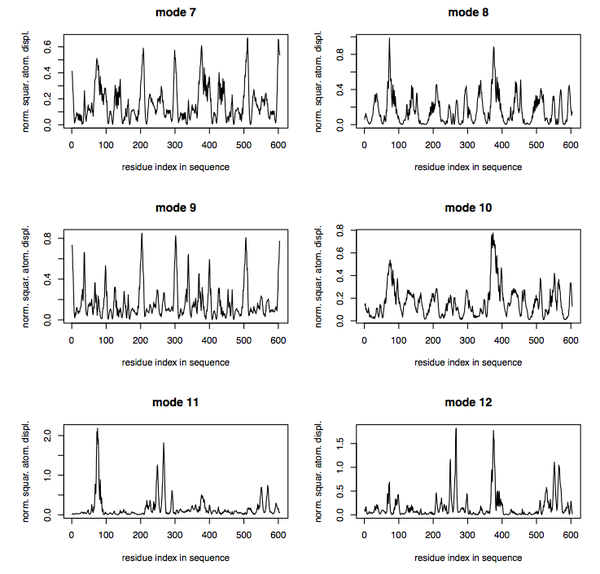 These are quite interesting in that they differ so strongly, yet there are quite a few places (around residue 100, 200) where almost all of the graphs show peaks to some degree. These seem to be regions that are very flexible. Mode 7 shows a rather strong cluster of peaks in between 350-400. This cluster is recognizable in Mode 8 and Mode 10 too, and to some degree in Mode 12. This seems to indicate a highly mobile region of the protein. We expected some kind of faint symmetry to be visible since we analyzed both domains, but there is none to be seen in the plots, which leads us to assume that this hypothesis is faulty. We also expected to see low mobility around the active site at 117 resp. 427; we found that this supposition holds.

Also returned was a graph of the fluctuations in position of the individual C Alpha atoms: 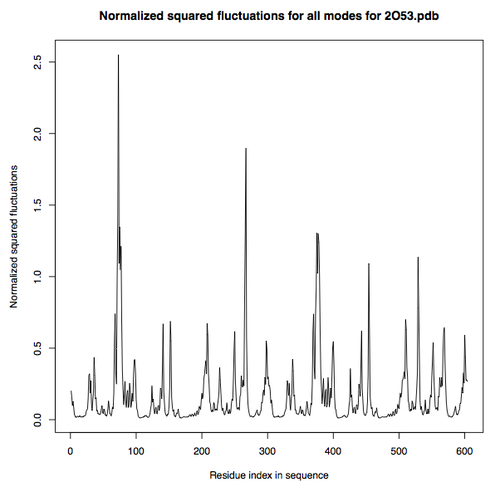 There seem to be two mobile regions, around ca. 80 and ca. 380, and a couple of more isolated peaks that we assume to denote local mobility e.g. of coils. It is interesting to see that the active site around 117 resp. 427 is in a region of very low mobility, as we would have expected to find.

Finally, animations of the individual movements for the Normal Modes:

The ElNemo web server was published in 2004 by Suhre and Sanejouand. It uses an elastic network model to compute a large number of normal modes and produce animations for the first five non-trivial normal modes for a given protein structure. We fed our protein, 2O53, into the ElNemo webserver and ran a calculation with default parameters.

In normal mode 7 we observe a shearing motion of the two domains against each other, roughly around an axis that transverses both domains and the connection between them. The Fluctuation Chart gives two big red areas; these denote amino acid pairs that undergo significant decreases in distance. The numerous blue spots denote increases in distance.

In normal mode 8, again a shearing motion is visible, albeit around a different axis this time, seemingly rotated somewhat towards the viewer. The fluctuation chart shows no such distinct patterns as the normal mode 7 one, instead a larger number of small splotches can be seen. There are more distance increases and less decreases, too.

Normal mode 9 exhibits a jaw-like or pliers-like open-and-close movement. The fluctuation graph contains no large areas of either distinct overall increase or overall decrease of distances; instead, a number of smaller patches of either can be seen.

In Normal Mode 1, there are two axes around which rotation happens. Both the parallel axes go through one of the two domains, and the domains undergo aboud 30 degrees of rotation around them, being constrained by the inter-domain binding site. The motion gives the impression of closing and opening jaws or like the head of a pair of pliers.

The distance matrix shows strong correlation within two distinct parts of the structure, visible in the form of two big square red regions. These are the domains that move independently from each other.

The deformation energy graph shows one very mobile cluster at around 60 and little in the way of mobility around the active site at 117.

In the case of the second Normal Mode 2 there is but one axis of rotation which transverses both domains and their connecting site. The domains undergo around 30 degrees of rotation in opposing directions, again constrained by the binding site. The motion makes a sort-of dancing impression.

The distance matrix shows weaker correlation, though the two domains are still discernible as two mostly-red square shapes. There is much more correlation in the rest of the graph than in Normal Mode 1, though.

The deformation energy graph again shows little deformation near the active site and again a mobile cluster at around 60. It is less pronounced than in Normal Mode 1, but still quite prominent.

In Normal Mode 3 the motion that occurs is strikingly similar to that in Normal Mode 1, except that the direction of motion slightly differs.

The distance matrix for Normal Mode 3 contains two smaller but well-defined rectangles that correspond to regions within the domains that have strongly correlated motion.

In the deformation energy graph, a number of clustered peaks is visible on the right side of the graph; the 60 peak cluster is largely gone, and the active site still shows little in the way of deformation.

In Normal Mode 4, both domains undergo a clamshell-like open/close motion.

The distance matrix is quite uniformly correlated. There are no readily discernible areas of circumscribed correlation, but a few small areas of anticorrelation are visible. These likely correspond to the edges of the clamshell-like cavity.

The deformation energy graph, a strong cluster of deformation is visible around 60. Another smaller cluster can be seen around 280, and at the active site little to no deformation happens. One isolated peak at 160 probably corresponds to a small isolated portion of a coil section that is highly mobile.

In Normal Mode 5 we observe a shearing motion with clamshell-like characteristics.

The deformation graph shows little deformation around the active site at 117, and no really strong clusters of motion. There are some weaker clusters at around 70, 160 and 280.

In Normal Mode 7 we observe a jaw-like open-close motion; the individual domains stay fairly rigid, and the motion occurs at a number of connecting coils which act as a sort-of hinge.

The cRMS graph seems to show little differences at around 880 and 3310 flanked by large peaks. Two clusters of peaks meet the eye, one around 500, the other around 3000. These are regions that have strongly correlated movements in this normal mode.

In normal mode 8, both domains rotate around an axis that traverses both domains through their respective centers, as if they were shish-kebabed onto a skewer and both rotated in opposing directions.

The cRMS graph again seems to show little movement at the active residues and again has two large clusters of very high peaks around 600 and 3000.

The animation shows rotation of both domains, again in opposing directions. However, this time the rotational axes reach out of the image towards the viewer. All in all, the motion strikingly resembles that of the two halves of a cookie being split in two.

The cRMS graph is quite different from the last two ones; we have one extremely high peak around 3000, and a tiny one around 500 and a microscopic one around 1000. Apart from that little is discernible due to the scaling of the plot.

In normal mode 10, we again have a cookie-splitting motion with minutely different axes of rotation.

The cRMS graph is almost identical to the previous one.

In normal mode 11, the overall motion appears quite similar; however, the domains rotate around axes that aren't even remotely parallel anymore; this leads to a kind-of shearing motion visible in the lower part of the image.

The cRMS graph has one huge peak at around 600, a tiny one at around 1000 and little other discernible features, as the 600 peak wrecks the scaling.

The cRMS plot again has one big peak - this time at 1000 - and another, much smaller one at 600. It also has the same wrecked scaling that makes it impossible to discern much else.

Visualizing the PDB animations from Nomad-Ref in PyMOL did not show any big differences between 2000K and 600K. Generally, at 600K the motion had a higher intensity than at 2000K, but little else in the way of apparent differences presented itself to us.

Apart from that, motions in one normal mode often seemed to be quite similar on animations generated by different servers. This was not always the case, but found to be true far more often than not.