Difference between revisions of "Tay-Sachs Disease 2011"

The Tay-Sachs disease (TSD) is a rare autosomal, recessive genetic disorder which is caused by accumulation of lipids in the brain. This leads to the cell death of those neurons. There exist three different variations of the TSD. The most common one is the Infantile Tay-Sachs disease which affects death of the children under the age of 5. The two other variants are the Juvenile and Adult/Late Onset TSD, which are less aggressive. The disease causes a deterioration of mental and physical abilities. Sadly, there currently exists no treatment.

This forms of the Tay-Sachs disease occur later in lifetime. These two forms were not always recogniced as variants of the TSD. The symptomes of these forms are less aggressive. Often the patients become wheelchair users and have some psychiatric and physical limitation, which could be handled with drugs.

The affecting protein in the TSD is the Beta-Hexosaminidase, which is a heterodimer consisting of two subunits alpha (encoded by the gene HEXA) and beta (encoded by the gene HEXB). The alpha subunit processes the hydrolysis of the GM2 gangliosides (which are fatty acid derivatives) to the GM3 gangliosides. This means the enzyme degradates the lipids in the brain and in other tissues. If the enzyme is defect it results in the accumulation of GM2 gangliosides in the neurons, which affect the death of those cells.

Only mutations in the HEXA gene can result in the TSD, whereas mutations in the HEXB gene result in other metabolic diseases. Nowadays, there are more then 120 known mutations which cause the TSD disease. These mutations suppress the activity of the Beta-Hexosamidase A which effects the failure of the GM2 gangliosides degredation. Furthermore this leads to the toxic accumulation of those lipids which results in the cell death of the involved neurons. The TSD is normally very rare, but there is a strong prevalence for it in the Eastern European Jewish, Cajuns and French Canadians. Most of the mutations in HEXA lead to the TSD, because they delete the enzyme function completely, which cause the infantile form of TSD. There are other mutations, which only reduce the enzyme-activity and therefore, cause the Juvenile or Adult TSD. 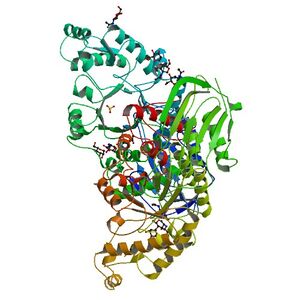