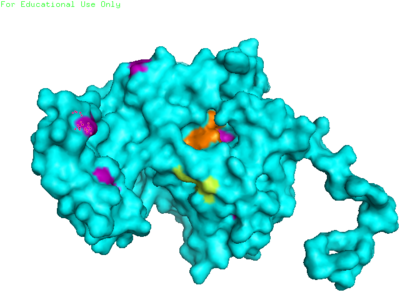 Minimise calculates the energy for a mutation by building a new model for each mutation. Then it calculates the energy for the whole mutated model. The aim by comparing the mutated models with the wildtype is to find out if there is a structural change caused by a mutation. We superposed each mutated protein with the wildtype and focused on the mutated position. The figures 20-37 show the superimposed structures. The pictures showing the wildtype structure display the unmutated residue in bold and vice versa. So we can compare the two pictures to see if there is a change in the structure caused by the mutation of this residue.