In order to display the runtime PSIBlast uses in order to get results you asked for we used a little skript which uses PSIblast with a variety of parametersettings. The overall message is that more iterations one uses used the more runtime PSIBlast needs. and the harder (lower) you choose your e-Value cutoff the less results you get. A general Message cant be more precise, because all the results depend mostly on the data you feed the programm. 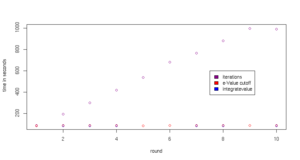 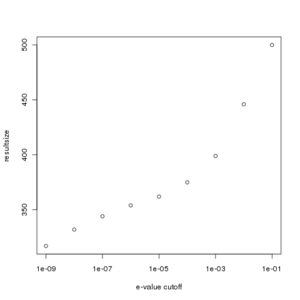 All of the following plots emphasis for our example how a change of parameter changes the outcome of the searchtool.

<xr id="psiblasteValue" /> shows that the distribution of the e-Values one derives from their search changes if you restrict them. Which also decreases the size of your result as shown above.

Instead of mapping hits in big_80 to PDB to get structural information for the alignments, we performed an additional search in PDB at NCBI, with parameters: scoring matrix=PAM70, gap open = 10, gap extend = 1, composition based statistics, max. 1000 target sequences.

We tried to create datasets of 4 sequences + reference sequence for the identity ranges (1: 90%-99%, 2: 60%-89%, 3: 40%-59%, 4: 20%-39%) from our search in the big_80 database. Since these results do not contain PDB structures, we additionally searched PDB directly for proteins in the required range and added them to the dataset. For the most conserved range, there is only 1 sequence in big_80, so we experimentally created the best possible highly conserved dataset in the range 80%-90% and used the structure of the reference sequence for 3D-coffee. The resulting datasets are shown in the following tables, the alignments in the figures <xr id="fig:ClustalW_set4"/> to <xr id="fig:3d_coffee_set1"/>. All sequences have roughly the same length as the reference sequence except for G5AMD7 in the first set. G5AMD7 contains an insertion of 162 aa ,that is easily identified in the alignment, but shows a very high similarity in the other sections.