For the statistical analysis we wrote a script which shows the distribution of the E-Value and the Identity as well as the different aligned sequences. Furthermore we create a Venn diagram to presentate the overlap between the results of the different searching methods (with http://bioinfogp.cnb.csic.es/tools/venny/index.html). First we compared the methods BLAST, FASTA and PsiBlast(PsiBlast with 3 and 5 runs and E-Value cutoff from 10E-6). Then we looked for the overlap of all done PsiBlasts.

FASTA found a large number of matches which are not found by the other methods. By comparison the number of hits which were not found by BLAST or PsiBlast, is about 1400. This is much higher than the number of sequences which is found by FASTA and BLAST together. This leads to the conclusion that FASTA aligns many sequences which are probably less good or even wrong. The both different PsiBlast-variants deliver the same hits which are all also found by FASTA. Furthermore all resulting sequences by BLAST were also aligned by FASTA and the most of them are also by PsiBlast. Besides, we decided to compare different runs of PsiBlast. We compared PsiBlast with 3 iterations and an e-Value Cutoff of 0.005 and 10E-6 and also two PsiBlast runs with 5 iterations and the same two e-Value cutoffs as before. In this Vann-Digramm could be seen that the result overlap mostly. Only a few ones differ from the other. This leads to the fact, that PsiBlast with different iteration number and e-value deliver usually a similar result. In summary the BLAST-methods agree with each other. In contrast the FASTa-method delivers much more sequences which do not correspond which one of the other methods.

The following plots show the distribution of the sequence idetities and the e-values of all used methods. Both values (x-axis) and their frequencies (y-axis) were extractet from the corresponding output-files.

The first image shows the distribution of the sequence identities. The first plot is the distribution for BLAST. Here could be seen that these identity-distribution is very balanced which means the low identities are approximate same common as the very high ones. The same goes for the HHSearch-plot. Contrary the Fasta-distribution has many high frequency for very small identities. This means that FASTA aligns many sequences although they have only a small sequence identity. This could explain why FASTA receives so many hits which do not agree with the other sequence searching tools (see Venn diagramm). The last four plots represent the corresponding distribution for the different PsiBlasts which were very similar. This is another in indication that PsiBlast received very similar results for the different parameters. Their distribution is also very balanced. There are high frequencies for small identities, middle identities and for high identities.

The second image shows the distribution of the e-values. The e-value is a measurement for the probability that a hit is resulting by chance. Therefore the smaller the e-value the better the alignment. All plots except the one for FASTA have high frequencies for small e-values whereby BLAST receives the smalles e-values. The e-values of FASTA have range from 0 to 8 where in contrast the other methods have no evalue higher than 1. Furthermore the highest BLAST e-value is at about 1e-29 which is still very low. In summary this shows again that BLAST deliver the best results and FASTA the worst ones.

HSSP (Homology-derived Secondary Structure of Proteins) lists proteins which are homologue and have a similar secondary structure. Therefore we use the HSSP alignment to check our results. Therefore we check how much overlap is between HSSP and the other methods. The overlapping sequences are the true positives. 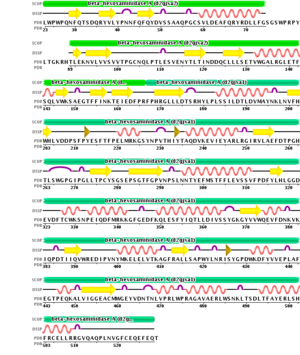 Secondary structure alignment for the Protein Hexosaminidase A (http://www.pdb.org/pdb/explore/remediatedChain.do?structureId=2GJX&chainId=A)