We chose the following mutations for the sequence-based mutation analysis: 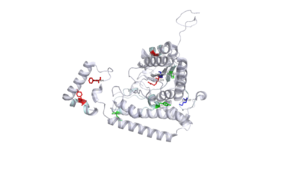 Reference amino acids which are substituted coloured as follows: SNP is listed only in dbSNP, only in HGMD, in HGMD and dbSNP 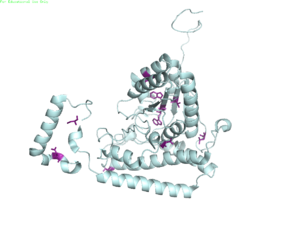 The mutation positions are relative to the Uniprot reference sequence.

A Protocol was created describing all steps for running the programs etc.

To visualize the mutations in the three-dimensional protein structure, the PDB entry for BCKDHA, 1U5B, was used. As the PDB file only contains coordinate information about the protein itself, the signal peptide (45 first amino acids) are not annotated. Therefore the first mutation on position 29, which lies in the signal peptide, could not be visualized.

The Protocol describes in detail the way how we used pymol to visualize our mutations.

Looking at the differences in structure and biochemical properties properties of the reference amino acid and the mutated amino acid, someone might draw conclusions about the effect of the mutation on the proteins' function.

The values in the pssm reflect the grade of conservation in an multiple alignment. The higher the values, the better the conservation and therefore a substitution of the corresponing amino acids is usually tolerated, as both alleles have been passed on successfully. The pssm values for our mutations have been colored orange. For most of the mutations the pssm score is negative and therefore this substitution is not conserved and not likely to be tolerated.

The G249S substitution has a score of +1, which is quite good. This indicates a small rate of conservation and therefore this mutation might be tolerated in nature.

The highest score for our substitutions is +5 for the M82L mutations. Accoring to the pssm this mutation is conserved and likely to be tolerated. This can be explained by the similar size and hydrophobic nature of both amino acids.

We compared the structure for each position:

To find the homolog sequences to BCKDHA we used BLAST. It found 250 homologous sequences, 25 of them are mammals.

Multiple Alignment of the homologous sequences of BCKDHA with CLUSTALW

With this 25 results we made a multiple alignment by using CLUSTALW. The alignment with all mammalian homologs was quite bad because of the sequences "Q6ZSA3" and "E2RPW4". These two sequences are much longer than the other ones. So we removed those sequences and realigned the other sequences.

With this new multiple alignment we could analyze the 10 positions of our mutations to find out how good they are conserved.

To run SNAP we used the command:

The output of SNAP shows us that most of the mutations would have a damaging effect on the structure and function of the protein. Only the mutations on position 29 and 249 would not have an influence on the protein.

A second SNAP run was performed where all ten chosen mutation positions were mutated by all possible substitutions. This run should show whether the substituted amino acid is essential at the corresponding position of the sequence or the mutation in not tolerated because an unwanted effect was introduced by drastically changing the physiochemical properties of the amino acid.

The following table shows for each position to what extend each of the positions is predicted to tolerate mutations.

This table shows that only the position 29 is not essential for the protein's functions. This is explainable by the fact that this mutation lies not within the actual protein sequence.

The position which allows for the most substitutions is the tyrosin at position 166. This tyrosin constitutes the end of a helix on the surface of the protein, a fact which might explain the variabilty of this position. The selected mutation to asparagine is not tolerated due to a quite different structure.

Position 82 allows the mutation for 3 amino acids, which are structurally all very similar. So for this position the structure seems to be important. The same is true for position 249 where alanine, glycine and serine are predicted to be neutral to the protein function. All of these amino acids are quite small and may therefore not disturb the protein structure and function.

In position 326 all three branched-chain amino acids are predicted to have a neutral effect on the protein's function. These amino acids are structurally and biochemically very similar and therefore a substitution is tolerated. The mutation to threonine however is not tolerated as this amino acid has different properties.

All other mutations are not tolerated at all. This means for these positions the wild-type residues are totally essential for the protein's structure and function and cannot be replaced by any other amino acid.

The following table displays the SIFT results. The threshold for intolerance is 0.05.

The amino acids are colored in the following way:

Seq Rep:fraction of sequences that contain one of the basic amino acids

The only substitutions SIFT predicts not to affect protein function are G29E and M82L. The first substitution may be tolerated, as this position is not within the actual protein sequence. The second tolerated amino acid exchange is from methionine to leucine........ These two amino acids quite similar concerning their structure and physiochemical properties, so an exchange can be tolerated.

Polyphen2 uses two different datasets to do the prediction. As the results show the two predictions are not always the same. The predictions with the HumDiv dataset says that there are three mutations that possibly have no grave effect on the function or structure of the protein whereas the result of HumVar is that there are four mutations that perhaps would have no damaging influence. The two mutations which are in both datasets marked as "benign" are at the positions 29 and 249. The mutation which is only in the HumVar dataset predicted as benign is at position 125.

Comparison of the predicted results of this TASK

G29E
On position 29 is the mutation from Glycine to Glutamic acid. Except of BLOSUM62 and PSSM all of the other tools and sources point out that this mutation is neutral. It is interesting that these two sources have quite low scores which indicates that they are sure about their prediction. But the fact that the other matrices have very high values and that this position is not very conserved with only 72% shows that this amino acid changes quite often. Because of this actuality it is possible that the mutation is neutral. Also the result of the secondary structure prediction confirms us in this presumption because there is no change between the original and the mutated secondary structure. Additionally the residue is a coil region which means it does not endoce a structural element. It has to be mentioned that SNAP is not absolutely sure about its prediction of neutrality which can be seen on the scores. It has the score of 0 shich is the lowest one and so it is very unsure. In contrast the tools SIFT and PolyPhen2 are sure about their prediction because SIFT has a quite high score (0.68)and PolyPhen2 has two really low scores (0.025 and 0.018) which shows that these mutations are certain. Since nearly all methods predict the mutation as neutral and most of them have really good scores for that we also predict the mutation as neutral.
M82L
The mutation on position 82 from Methionine to Leucine is predicted to be neutral by most of the methods. Only SNAP and the conservation score declare the mutation as non-neutral. The prediction of SNAP has a reliability index of four which means that SNAP is very sure about the result of its prediction. By looking on the conservation score it arises that this position is indeed very good conserved because the value is 96%. But the value is not 1 which shows that some mutations on this position are possible. In contrast to these two results the substitution matrices display that the mutation is neutral because all of them have high values for the change from Methionine to Leucine. And also the PSSM score is very high which indicates that this mutation has no damaging effect on the structure and function of the protein. The two tools SIFT and PolyPhen2 are also very sure about the fact that this mutation is neutral. This is based on the fact that SIFT predicts it with a high value of 0.65 and PolyPhen2 with a low value of 0.001. Another additional information is the structure of the two proteins. By comparing the two structures it appears that there is nearly no change in the structure of the protein. Because of this fact and all the other methods which declares this mutation as neutral, we also predict is as neutral.
Q125E
Based on the predictions of the different tools it is not possible to decide wether this mutation from Glutamine to Glutamic acid is neutral or not because the tools say completely different things. By looking at the protein itself it can be seen that there is a structural difference between the two proteins since it is not possible to superpose them perfectly. But the difference between the two structures seems to be minimal which can be the explanation that there are different predictions. It is also important to recognize that most of the tools are not completely sure with the prediction they made. For example the PSSM value is 0 which is exactly on the border between neutral or not. Also SNAP is not very sure at all because the reliability index is only 1. In contrast the preditino of SIFT is very save since the value for this mutation is 0.0 which is the lowest possible value. And also PolyPhen2 is unassured given that the two different datasets predict two different things. One says neutral and the other one non-neutral. Because of this many different results it can be assumed that if this mutation is non-neutral the influence is minimal. Since the experimental structure is different we would say that this mutation is non-neutral but as already said and as it can be seen the influence is minimal and so the difference is also not that grave.

Y166N
The mutation from Tyrosine to Asparagine is predicted to be non-neutral by all of the tools and sources. The values of the substitution matrices and the PSSM score are all low which shows that this mutation does not occur very often. The rareness of a change on this position is also shown by the conservation score which is 1. This reflects that the amino acid at position 166 has an important role for the structure and function of the protein and so the mutation to another amino acid is not neutral. Also the secondary structure prediction points out that there are changes because of the different amino acid. Especially the tool PolyPhen2 shows how certain this prediction is, since the scores are 0.997 (HumDiv) and 0.964 (HumVar) where 1.0 is the highest score. The prediction can be confirmed by looking at the experimental structure of the two different proteins. The mutant protein has no aromatic ring while the original protein has one. Because of this structural difference the pysicochemical properities of the two proteins are not the same.

In order to categorize the SNPs extracted from dbSNP and HGMD into "neutral" and "non-neutral" concering their effect on the protein function the following assumption was made:

All SNPs listed in the HGMD are disease related mutations. SNPs that are listed in both databases do have an effect on the protein's structure and function. All SNPs only listed in dbSNPs do not affect the protein function.

Precition accuracy of the tools

Comparing the different prediction methods, someone should look at the accuracy of the predictions. In our case SIFT performed the best and made the most correct predictions. PolyPhen using the HumDiv dataset made also 8 out of 10 predictions correct, SNAP and PolyPhen (HumVar) predicted only the effect of 7 mutations on the protein function correctly.