TODO maybe I should do a more thorough description of the different mutations, see task description

HGMD has a distinct subsite for HEXA and its missense/nonsense mutations. After exclusion of all nonsense mutations, 60 SNPs remain in the free version and 65 in the professional version. As to be expected, the five new entries are based on publications from 2009-2011. At the specific sites 58, 207, 259, 322 and 497, no other mutations have been known so far, making this highly valuable information. In addition three of these mutations are not found in any other database, while the most recent one C58Y is present in OMIM as well and Y497C from 2009 can also be found in dbSNP and snpdbe.

The search for hexosaminidase A in human yields 76 entries. Of those 55 are present in dbSNP with protein identifier NP_000511 and 21 are solely from Swissprot or SwissVar with the accession number P06865. 18 snps are experimentally validated, see <xr id="snpdbeexp"/>. <xr id="snpdbecons"/> show the distribution of the conservation of wildtype and mutant amino acids. 15 snps have a higher conservation of the wildtype than 50%. The mutant conservation does not exceed 15%.

OMIM contains a dedicated subsite for HEXA <ref name="omim_hexa">http://omim.org/allelicVariant/606869</ref> which lists 58 variants in total. Among these are entries that can be mapped to 36 unique rs-identifiers. After exclusion of all variants that are neither missense nor synonymous, 29 missense and 1 synonymous variation remain. All of these were already found by querying dbSNP.
Additionally, there are 19 entries that do not contain cross-references to dbSNP. Of these 18 are deletions, insertions or intronic variants, all of which are not relevant for this task. One mutation however, Cys58Tyr has to be added to the 29 missense mutations from above. Interestingly this mutation is not present in any of the other databases. The original publication <ref name="Najmabadi2011">﻿Najmabadi,H. et al. (2011) Deep sequencing reveals 50 novel genes for recessive cognitive disorders. Nature, 478, 57-63.</ref> lists this mutation in connection with a phenotype of mild Tay-Sachs disease. A reason that this entry is missing from all other databases might be the fairly new publication date. Indeed comparison to the professional version of HGMD shows that the mutation is found there as well.

The overlap between all databases with the free version of HGMD can be viewed here. 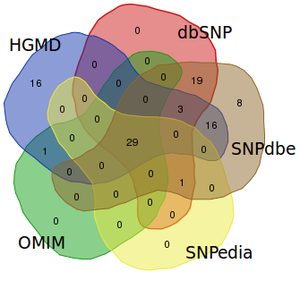 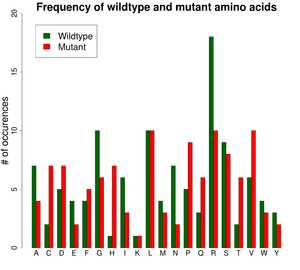 TODO you have to dbSNP, snpdbe is fine

SNPedia's wiki system can in theory be very powerful, however for HEXA only a single entry contained additional information added by a human. Unfortunately the number of active users currently seems to be very low, limiting the possibilities that lie within the system <ref name="snpedia_active_users">http://www.snpedia.com/index.php/Special:Statistics</ref>. The lack of further information cannot be complemented by the SNPs present, because all of them can be found in dbSNP as well. On the other hand, OMIM also has very similar data and only one unique entry, that is not present in any of the other databases. However OMIM contains a text with a summary and additional information for every entry. So while SNPedia might have the foundation to become superior through crowd-sourcing, currently the more closed system OMIM seems clearly better.
HGMD has contained the largest number of missense SNPs, drawbacks however are the closed system, that makes retrieval of the data harder than necessary and direct programmatic access to data virtually impossible without paying for the service. For research based on single genes of interest this is not an issue though.
The authors wish to be recursed from the judgement of snpdbe due to a conflict of interest.