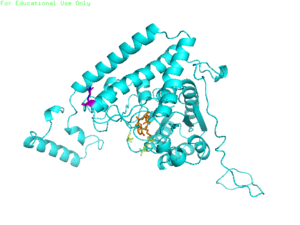 The substitution from glutamine to glutamic acid changes the side chain properties completely. A NH2 group is substituted by a negatively charged oxygen. The NH2 which served in the wildtype structure as a hydrogen bond acceptor (see Figure 4) is not present any more, so the hydrogen bonding network changed for this substitution (compare Figure 4 and 5).