Remarkably the first two residues with best L-Score, which are residue 19 (Glycine) with a score of 6.4 and residue 26 (Glutamine acid) with a score of 6, lay before the first domain (ACT). At residue 20, which is the neighbor of residue 19 with best L-score has a natural variant associated with Hyperphenylalaninemia annotated in Uniprot. Additionally for residue 165 (Alanine), which has the third best L-Score of 5.11, the neighboring positions 164 and 167 have natural variants annotated in Uniprot which are associated with PKU. 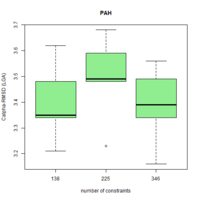 </figure> Like for H-Ras structure prediction with 65% of the protein length (b) as constraint number seems to be a good tradeoff between to few (a) or to many (c) constraints to cover the true structure (<xr id="biopterin_evfold"/>. Nevertheless here there are more false positives already found for 138 constraints and so without the reference structure beneath it would be very hard to see the true pattern. However, for 346 constraints the false positives are so many they build some false hotspots. Altogether the structure prediction is not so good for this protein. Maybe this is caused by the smaller protein family and therefore a smaller multiple alignment. Additionally the RMSD values show the same result as the contact map with scores around 20-22 which is nearly twice the score than for the H-Ras structure predictions. At a constraint number of 40% of the protein length (138) the RMSD values range between 3.35 and 3.5, at a number of 65% of the protein length (225) they reach scores between 3.5 and 3.6 and for 100% they are between 3.35 and 3.5. This can also be seen in figure <xr id="pah_rmsd"/>.