Freecontact is a program that takes a multiple alignment and can calculate the mutual information score and the corrected norm contact score.

In one step residue pairs that are separated by more than five residues are extracted, because if they are to close they mostly get high CN-scores as they have local connections. However, for structure prediction more distant residues are more interesting. ...

Comparing the best ten CN-scores for all and for residue pairs with at least a distant of more than five amino acids it is remarkable that for all pairs the ten best all are directly neighboring amino acids and have almost twice of the CN-score (<xr id="cn-ras"/>). The range of the CN-score goes from -0.65 to 3.40 for the extracted residue pairs. The distribution can be viewed in <xr id="cn_distr_ras"/>. Additionally the distribution of all residue pairs is shown. They are very similar, nevertheless the range of all pairs goes up to 6.01. For the DI-score calculation using EVcouplings a range between 0.00 and 0.22 was achieved. Five of the ten best results are in common for extracted residue pairs found with freecontact and EVcouplings, which are 10(G)-16(K), 11(A)-92(D), 81(V)-116(N), 82(F)-141(Y) and 130(A)-141(Y).

In <xr id="tp_ras"/> the true positive rate for the combination of 50 residue pairs is shown. Like expected the best CN-score are true positive in most cases. So for the best ten results shown in <xr id="cn-ras"/> above only one, the third pair 87/129, is predicted wrong. The lower the CN-score the less tp can be viewed. Therefore a pearson correlation coefficient of -0.78 was reached. 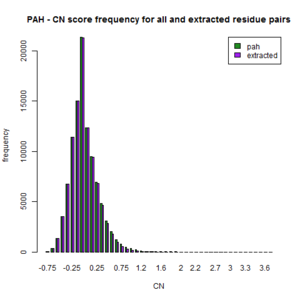