Normal Mode Analysis (NMA) is a very useful tool to analyse large-scale motions in proteins. There are two approaches. In the first approach, all-atoms were used to calculate the harmonic motions. As this procedure needs a lot of memory, the elastic network model was developed, which does not take all interactions into account. Like this the memory needed can be dramatically reduced and the method can be applied to larger proteins.
In this TASK, we apply different NMA methods to our protein ARSA to investigate the flexibility and motions of the structure.


For most methods, we were able generate animated pictures to visualise the results. We used gifsicle to generate the animated gifs:

When we used pdb files to visualize the movements, we first generated pngs of the single frames and converted them to the gif format before applying gifsicle:

The following picture shows the structure of ARSA. All important functional sites are colored. This will be important to make hypotheses about the calculated movements in the structure. One can see from the picture, that the enzymatic cleft where the substrate enters the protein is located below the parallel beta sheets in the core of the protein. The cleft is surrounded by flexible loops, which contain only few turns as structural elements. 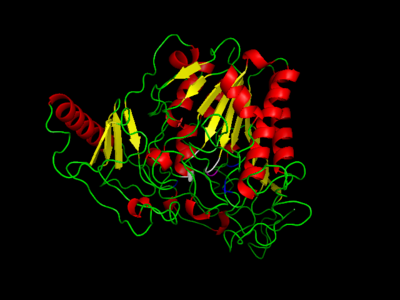 Native structure of ARSA. Beta sheets are colored yellow, helices red. Metal-binding sites are depicted in white, substrate binding sites in blue and the active site in magenta. (To memorize for later analysis: The parallel beta-sheets at the core of the protein are poiting towards all important functional sites. The terminal helix is on the left.)

We chose the single analysis for our protein with default settings. after a short calculation time, the interface directly guides the user to a Jmol applet were the mode is dynamically visualized. We used this appled to generated images for each frame and then used gifsicle as described above to generate the animated gifs, shown below.
Furthermore we saved plots of the initial protein structure together with vectors of the movements, as well as a figure which visualizes the extent of the molecular displacement along the protein.

Mode 7, 8, 9, 10 and 12 show a huge displacement at the end of the protein. If we have a look at the animated gifs, we can see that a helix is involved in this movement. Int mode 11, the movement is distributed more along the whole protein. Also here, the helix is involved in the movement, but not as strong as in the other modes.
The helix extends from position 450 to 469. The question is, if this movement is functional or not, i.e. if it is for example involved during substrate binding. Mode 8, 9 and 10 show a open-close movement at the bottom of the protein in the animations. This is where the substrate enters the protein. Even though the movement is very tiny, it could be involved in the cleavage process, as many enzymes close clefts upon substrate binding.
As we are unfortunately not able to verify this due to the lack of resolved substrate bound structures of the enzyme, this hypothesis remains completely spectaculative.

THe ElNemo webserver was published in 2004 by Suhre and Sanejouand <ref> K. Suhre & Y.H. Sanejouand (2004) ElNemo: a normal mode web-server for protein movement analysis and the generation of templates for molecular replacement. Nucleic Acids Research</ref>. The webserver takes a single pdb file of the structure of interest and computes the first five non-trivial normal modes for the protein. We submitted our pdb file with the default parameters. ElNemo outputs pdb files of the different frames, plots visualizing the fluctuations and already animated gifs of the modes.
We present the animations by ElNemo together with the plots of the fluctuations in the following table. For convenience and a more thorough visualisation, we generated additional animations with pymol from the pdb file, generated by ElNemo.

Like in the analysis with WEBnm@, all modes computed by Elnemo show movements of the terminal helix of the protein, but in general the movements seem to be bigger here. We can again report the closure-movements at the "bottom" of the protein. As stated before, this is where the substrate enters and binds the protein (see also the Figure in the Introduction section).

The Anisotropic Network Model (ANM) web server was published by Eyal et al. in 2006 <ref>Anisotropic network model: systematic evaluation and a new web interface, Eyal E, Yang LW, Bahar I. Bioinformatics. 22, 2619-2627, (2006)</ref>. For our analysis, we set the distance weight cutoff to 3.0. The ANM web server generates a really nice output, containing distance maps, fluctuations and pdb files containing the movements of the modes. The great thing about the pdb files is, that the structure is color coded, regarding the amplitude of the movements. The results of the ANM web server for the first 5 non-zero modes are summarized in the following table:

The results of the ANM webserver agree again with previous results. The biggest movements can again be observed at the terminal helix of the protein (see pairwise distance maps and fulctuation plots above). Again the open-close movement can be observed in most modes. The most salient example of this are modes 3 and 5. In mode 3, the whole arm, where the terminal helix is located is moved downwards to the substate entering site.
In mode 5, this open-close movement is even more obvious as only the loop regions at the enzymatic cleft are moving. The terminal helix is not involved much here.

oGNM was developed by Yang et al. in 2006 <ref>oGNM: A protein dynamics online calculation engine using the Gaussian Network Model" Yang, L.-W., Rader, A.J., Liu, X., Jursa, C.J., Chen S.C., Karimi, H, Bahar, I. Nucleic Acids Res, 34, W24-31, 2006 </ref>. It slightly differs from the other methods used during this TASK. It uses a Gaussian network model to compute the fluctuations in the protein. Unlike the other methods it does not output the movements itself, but measures, that reflect the motion and flexibility of the protein.


The output contains, e.g. mobility profiles of residues corresponding to the 20 slowest modes of motion predicted by the GNM, the predicted and experimental B-factors and the cross-correlation between residue fluctuations, plotted as a correlation map. In the table below, we organized the first five non-zero modes generated by oGNM. The table contains the color-coded mobility profile and the fluctuations.

The link in the TASK description did not work so we used the following address for our calculations:

The results nicely agree with the previous analyses. Again the terminal helix seems to be involved in the major movements within the protein (mode 7,8,11). Mode 9 and 10 show some mobibility also in the middle of the protein, but these movements are not as large as the movements of the terminal helix. This can be seen in the plot where all fluctuations are visualised together. Mode 9 corresponds to mode 5 from the ANM webserver, where the loops close the enzymatic cleft (see previous section). The movements of mode 9 and 10 might also be similar to mode 11 of WEBnma@ where we have also a mobility covering the whole protein and like here this mobility is much lower than the mobility of the helix. Furthermore, one can clearly see, that mode 7, 8 and 11 show much larger movements than mode 9 and 10. Unfortunately we cannot visualize the movements itself from the output of oGNM, but at least, the mobility profiles to mode 11 of WEBnm@ look very similar.

NOMAD-Ref was developed by Lindhal et al. in 2006 <ref>Lindahl, E., Azuara, C., Koehl, P. and Delarue, Marc. NOMAD-Ref: visualization, deformation and refinement of macromolecular structures based on all-atom Normal Mode Analysis. Nucleic Acids Res. (2006) 34: W52-56. </ref>
We made two different types of analyses with the NOMAD-Ref webserver. In the first analysis we computed normal modes for ARSA using elastic network calculations. The second analysis should serve to compare results of an all-atom normal mode calculation to an elastic network calculation.

We generated animated gifs from the pdb files for the first non-zero modes. These are - together with the distance of the movements - shown in the following tables:

Mode 7 shows spurious results. In this mode two residues exhibit very large, completely unrealistic movements. We do not have an explanation for this, espaccially as we removed all atoms outside of the protein (water, metal ions, etc.). We also observed this, when we applied the method to 1BPT in the next section, where we als oremoved all additional moleculues.
Modes 8-11, however, nicely agree with previous results. We obeserve again the movement of the helix in all modes. Especially in mode 11, we can see again the open-close movement around the enzymatic cleft. The other modes look again similar to the other results, though we observe the largest movements in these computations.

The results of the all-atom calculation look very similar. As expected the modes, which were calculated at higher temperature show bigger movements compared to the lower temeperature.
We tried to compute the modes for the elastic network several times, but we got always the same spurious results, shown in the table above. Somehow, in all modes big unrealistic movements appear. We have removed all solvent atoms using repairPDB, so there should not be any molecules in the pdb causing these effects, so we do not have an explanation, what could have caused this effect. Especially as the all-atom calculations look very nice.

We have applied five different methods to calculate normal modes for ARSA. Recurent movements are reported by all methods. A large movement of the terminal helix in the protein can be found in the results of each method. Sometimes this helix is involved in an open-close movement around the site where the substrate enters the enzyme. In other modes only the loop region around the cleft is moving. We conclude, that this movements might be functional and could be induced upon substrate binding of the enzyme. However, this hypothesis remains highly speculative, as we do not have any resolved substrate-bound structures of the enzyme.
These results are reproducible, as all methods output very similar results. No matter, if the movements are functional or not, the results suggest that these parts of the protein - the terminal helix and the loops around the cleft - are important flexible regions in the structure.