In this task we examine the motions of our protein with the power of normal mode analysis. The tools used are WEBnm@ and ElNemo.

We used the PDB structures 1a6z and 1de4 for our NMA. 1a6z represents HFE bound with Beta-2-Microglobulin only and 1de4 contains the whole TFR-HFE-B2M complex. We extracted HFE's conformations from these structures (chain C from 1a6z and chain A from 1de4). Both files contain the same 272 residues (26-297 within HFE's sequence). A comparison between the two showed that there are only minor differences in the conformation (cf. <xr id="comparison"/>) and almost all of them are within loop regions. TM-Score calculated an RMSD of only 1.602 and a TM-Score of 0.9607 for them.

For the NMA we used WEBnm@ and ElNemo<ref name="elnemo1">K. Suhre & Y.H. Sanejouand, ElNemo: a normal mode web-server for protein movement analysis and the generation of templates for molecular replacement. Nucleic Acids Research, 32, W610-W614, 2004.</ref><ref name="elnemo2">K. Suhre & Y.H. Sanejouand, On the potential of normal mode analysis for solving difficult molecular replacement problems. Acta Cryst. D vol.60, p796-799, 2004 © International Union of Crystallography.</ref>. Both webservers use the C-alpha atoms only for the normal mode calculations and thus could theoretically compute 816 (3N, N = 272) normal modes, though the first 6 are irrelevant as they represent the three simple translations and rotations of the whole protein. In addition to the normal modes they provide also features to compare normal mode motions with other conformations of the same protein or correlation analysis of different normal modes.

The deformation energy scores computed by WEBnm@ are shown in <xr id="webnma_energy"/>. The first 6 modes (7-12) could be put into three groups: Mode 7-9 which have a very small score, 10 and 11 which have about double the score of 8/9, and Mode 12 which again doubles Mode 10's score. This suggests that the first three combine big motions while the latter three exhibit more and more smaller parts that move separately.

The most notable thing about the normal modes' motions is that the lowest ones (7-10) have almost no intra-domain movements (i.e. the MHC I and C1 domains move as a whole). Only mode 11 and 12 start bending the domains (e.g. the folding of the C1 domain in mode 11). The domains also do not seem to share any of their rotational axes and thus there is no classic hinge movement. These independent domain movements are probably caused by the lack of a strong inter-domain connection as there is only a single loop between them. Mode 7 is the only exception to this as both domains seem to rotate around almost the same axis.

The lack of an active site makes it hard to give the movements a meaningful function such as cleaving of the substrate or openening of a pocket. Nevertheless the ability of both domains to move independently should be beneficial for HFE to bind both its complex-partners, TFR and Beta-2-Microglobulin, as the first binds to the MHC I domain and the second to the C1 domain. 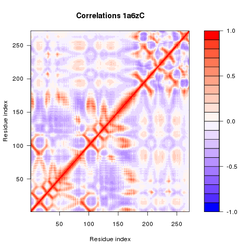 We also compared the normal modes' motions with the conformation of HFE in 1de4A to see which of them could be important for the transition between the two conformations. The most notable modes are 18, 29, 30, 52, 72, and 113 (cf. <xr id="webnma_overlap"/>). Their cumulative overlap is 15.2 percent which is significantly above the median of 0.088 percent for all modes. The highest peak (~10 percent) is at mode 6 which is kind of strange as it suggests that a simple rotation would make up the single most notable part of the transition. Though you would think that such a rotation is part of aligning the structures in the first place. Altogehter the first 200 normal modes have a cumulative overlap of 66.8 percent.

It is also not surprising that most of the important modes are rather medium-to-high-frequency as the main differences between the two conformations are in the short loop regions and therefore should be caused by local motions instead of global ones. Another indication that mode 18 might be favored amongst the other modes is the drop in the energy score compared to those of mode 17 and 19 (cf. <xr id="webnma_energy"/>).

The normalized (sum up to 100) atomic fluctuations over all modes in 1a6zC are shown in <xr id="webnma_fluctuations"/>. The regions with the highest displacements are, unsurprisingly, almost exclusively loops. This suggests that the conformation of HFE is pretty fixed and does not change much during the protein's lifetime (cf. also <xr id="comparison"/>).

Mode 7 shows completely different movements as it did before. Instead of the almost uniform rotation of both domains it now exhibits a hinge-motion between both of them. Mode 8 is also slightly different in that the C1 domain lost most of its rotational movement and shows more a "flapping" one. In contrast to the previous two modes there is almost no difference for mode 9 (e.g. only a minor change in the excursion of the C1 domain's rotation) and the modes 10 to 12 are more or less identical to the ones calculated with WEBnm@.

<xr id="elnemo_dist7to12"/> show the distance fluctuations of the C-alpha atoms for the modes 7 to 12. The two main domains MHC I and C1 seem to always move as one unit as the upper left and lower right corner are almost empty. While modes 8 to 11 are rather mixed the modes 7 and 12 bring either all parts closer together or move them farther away.

The cumulative overlap of the normal modes with the alternative conformation of HFE (1de4A) is shown in <xr id="elnemo_overlap"/>. In contrast to WEBnm@ it seems that ElNemo gives only a rough approximation of the overlap as we only get steps of 20 percent, but no discrete numbers for each mode. When compared to the previous results from WEBnm@ the only exact match is mode 29 and a close one with 51. Though a direct comparison might not be possible as we have seen that not all modes from ElNemo and WEBnm@ exhibit the same motions.

ElNemo also calculates B-factors based on the first 100 normal modes for 1a6zC. Though the correlation coefficient is only 0.164 (based on the C-alpha atoms). There seems to be no significant tendency for under-/overprediction either (cf. <xr id="elnemo_bfactors"/>), but there can be several reasons for the low correlation, such as lower flexibility due to the crystallization or other atoms which are missing in the normal mode computation, but were present during crystallization.

Similar to the fluctuation results from WEBnm@ the regions with the highest B-factors are again the loop regions. Although the values and cutoffs cannot really be compared directly the orange and red regions in the structure seem to overlap pretty well for both methods. 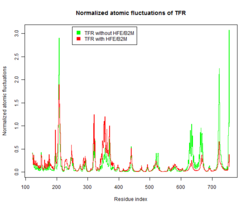 Figure 2: Comparison between the atomic fluctuations of TFR (1de4C) when in complex with HFE/B2M (green) and when unbound (red).

In addition to the NMA performed on HFE we also wanted to take a brief look at the effects of HFE on the normal modes of TFR. We computed the normal modes for the chains A (HFE), B (B2M), and C (TFR) of 1de4 and for the C chain only. The atomic fluctuations (computed by WEBnm@) for TFR are shown in <xr id="tfr_fluctuations"/>. In order to be able to compare the values we cut out the fluctuations for TFR from the complex (A+B+C chain) and re-normalized them to sum up to 100 (like the ones for the C chain do). The plot shows a decrease in the whole end region (610-756), the ligand binding region<ref name="tfr-ligand">http://www.uniprot.org/uniprot/P02786</ref>. Due to the reduced mobility in this region after binding to HFE the complex should be pretty stable. As HFE needs to remain bound to TFR in order to reduce the iron uptake, this induced stability might come in handy.