The results can also be found [2]. 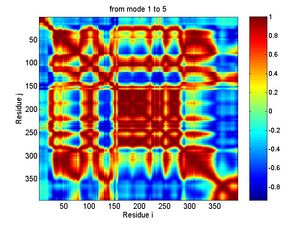 The NOMAD <ref>[[3]]</ref> server provides a lot of information and options. The interface is quite user friendly as all available parameter choices are explained in detail and there is also the runtime listed for an example NMA, which can be used to estimate the runtime for our own jobs.

In order to do the all-atom NMA we needed an appropriate small molecule that contained not more than 2000 atoms. This small protein was found by searching for "all atom nma". We found a paper <ref>Hetunandan Kamisetty, Eric P. Xing and Christopher J. Langmead: Free Energy Estimates of All-atom Protein Structures Using Generalized Belief Propagation[[4]]</ref>, where they used the structure of a hen egg-white lysozyme for an all atom NMA. So we did all the calculations for the corresponding PDB entry 2lyz.

We have applied five different methods to calculate normal modes for BCKDHA. All methods agree in their reported movements. Each method returned a large, hinge-like motion of the C-terminal loop region. Some calculations also show a twisting and wiggling motion of this region. Some other modes show a hinge-movement of the N-terminal helix region. As all methods reported that only the terminal protein regions are flexible we conclude that these movements are functionally important. They could possibly be crucial for binding ligands or another protein. With the knowledge that the branched-chain alpha-keto dehydrogenase is an enzyme complex consisting of two alpha-subunits (encoded for by BCKDHA) and two beta-subunits (encoded by BCKDHB) one can assume that these movements might be necessary for building up the protein complex. Figure 55 shows that the flexible regions (especially the C-terminal loop) are used to hold the proteins together. 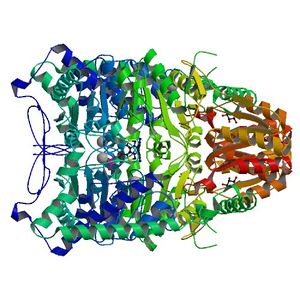