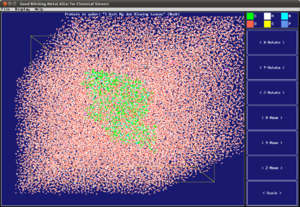 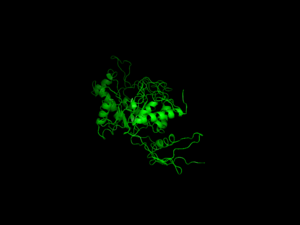 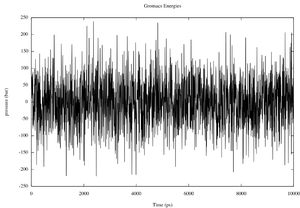 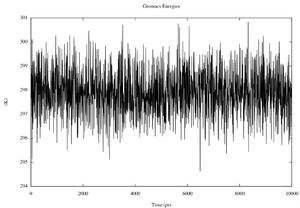 As you can see on Figure 6, most of the time the system has a temperature about 298K. The maximal difference between this average temperature and the minimum/maxmimum temperature is only about 6 K, which is not that high. But we have to keep in mind, that only some degree difference can destroy the function of a protein. 298 K is about 25°C, which is relativly cold for a protein to work, because the temperature in our bodies is about 36°C. 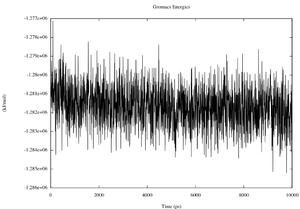 As can be seen on Figure 7, the potential engery of the system is between -1.2771e+06 and -1.2852e+06, which is a relativly low energy. Therefore this means that the protein is stable. So we can suggest, that the protein with such a low energy is able to function and is stable and therefore, our simulation could be true. Otherwise, if the energy of the simulated system is too high, we can not trust the results, because the protein is too instable to work. 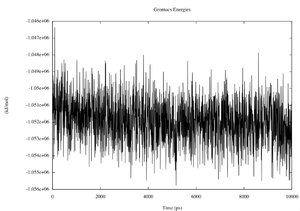 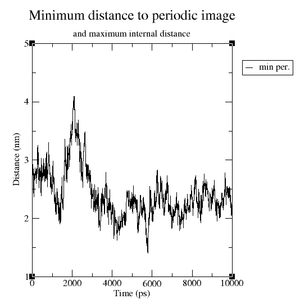 As you can see on Figure 9, there is a huge difference between the different time steps and distances. The highest distance is 4.096 nm, whereas the smallest distance is only 1.408 nm. Therefore, there are some states during the simulation in which atoms are close together if they interact and there are some states in which the atoms who interact are far away. Because of the huge bandwidth of minimum distance we can conclude, that the protein is flexible 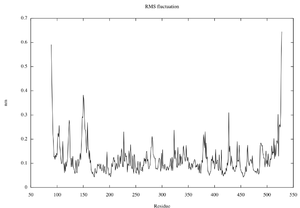 There are two regions with very high B-factor values. One region at position 150 (Figure 17), and the other region at position 440 (Figure 18). If we compare the picture of the original and the average structure, we can see that most of the regions build a very good alignment, whereas some regions vary in their position. Therefore, we want to compare, if these regions are the regions with very high B-factor values.

Furthermore, we visualized the B-factors with the pymol selection B-factor method. We calculated the B-factors for the blue protein (Figure 19 and Figure 20). If you see red, this part of the protein is very flexible. The brighter the color, the higher is the flexibility of this residue.

The structure alignments and the accoring RMSD delivers the same results as in the section above. The RMSD of the alignment between the structure with high B-factor and the origrinal one is the smalles ones which indicates that this structures align best (Figure 22 and Figure 25). This was expected, because we used twice the same model, but in this case we neglected the residues of the atoms. But the backbone of the protein remains the same. The other two models (Figure 21, Figure 23, Figure 24 and Figure 26) have nearly the same RMSD value and therefore there are equally.

Furthermore, we got a plot of the RMSF values of the protein, which can be seen on Figure 27: 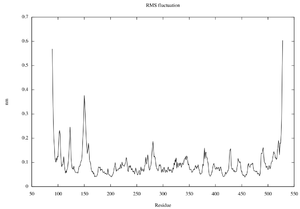 Figure 27: Distribution of the b-factor values by only regarding the backbone of the protein.

Furthermore, it is possible to look at the solvent accesibility of each atom of the complete protein, which can be seen in Figure 32 and Figure 33.

In Figure 32 the average area per atom is ploted, which deliver similar results to Figure 30. In general the atoms have not such a big area as the residues. This can be explained easily because the residue area is consisting of the single atom areas which belong to this residue. There are a huge number of atoms which have an area of about 0nm². As before, the standard deviation is not that high (Figure 33). It is a little bit higher than than the one in Figure 31 which was expected, because of the more smaller and detailed scale of this Figure. In general Figure 32 and Figure 33 confirm the results of Figure 27 and Figure 28.

The following plots display the number of hydrogen bonds within the protein over the simulation time.

The following plots display the number of hydrogen bonds between the protein and the surrounding water over the simulation time.

Looking at the number of hydrogen bonds formed between the protein and the surrounding water, which is visualized in Figure 35, we can see that there exist much more bonds between protein and water than within the protein. The number differs between 800 and 900 which is about 3 times more than the number within the protein. Besides, the average number of bonds between water and protein increases a bit over the simulation time. However, most of the time, the protein forms between 840 and 860 bonds with the surrounding water.

This is no surprise, because every residue on the surface has contact with water, whereas within the protein there are a lot of amino acids which have no contact partners, because of the big underlying distance to another amino acid. 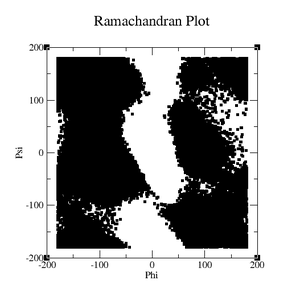 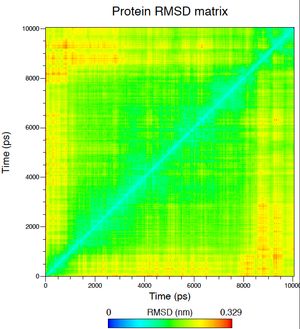 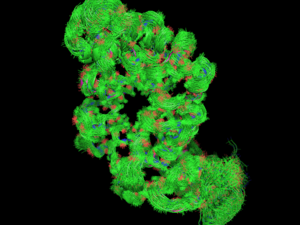 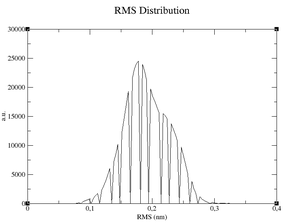 In Figure 40, it is possible to see, that the distribution is a gaussian distribution, with the highest peak at 0.18 Angstrom. This means, that most of the structures have a RMSD about 0.18 Angstrom compared to the start structure. This value is not that high, but it is a strong hint, that the protein is flexible during the simulation. 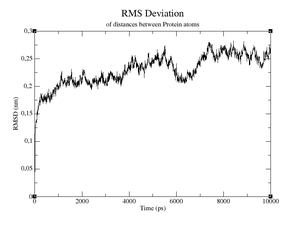 Figure 41 shows that the RMSD increases consistent during the whole simulation. At the beginning the RMSD is relatively small and then arises very fast till it reaches a point where it rises slower. Only at Time 6000 there is a vally in the plot. The internal RMSD reaches at the end about 0.25 Angstorm, which is not relatively high. Therefore the protein has a big distances to itself.