The 3D structure of proteins is very important for many biological experiments. However, the number of known protein structures (91190 Structures on PDB <ref> RCSB Protein Data Bank, retrieved on Tuesday June 04, 2013 at 5 PM PDT </ref>) is very low in comparison to the number of known protein sequences (540261 Sequences of UniProtKB/Swiss-Prot<ref> http://web.expasy.org/docs/relnotes/relstat.html, Release 2013_06 of 29-May-13 of UniProtKB/Swiss-Prot contains 540261 sequence entries, comprising 191876607 amino acids abstracted from 219534 references. </ref> and 35502518 of UniProtKB/TrEMBL <ref> http://www.ebi.ac.uk/uniprot/TrEMBLstats/, Release 2013_06 of 29-May-2013 of UniProtKB/TrEMBL contains 35502518 sequence entries, comprising 11384440438 amino acids.</ref> on Uniprot). Since the quantity of folds in nature is limited and the 3D structure of proteins is more conserved than the appendant sequence, it is often possible to find a homologous protein with a known structure (template) for an interesting protein sequence (target). So, homology modelling is one of the best methods to predict 3D structure of proteins depending on their sequence<ref name="swissmodel"> Konstantin Arnold, Lorenza Bordoli, Jürgen Kopp and Torsten Schwede (2006): "The SWISS-MODEL workspace: a web-based environment for protein structure homology modelling". Bioinformatics Vol.22(2): 195-201. doi:10.1093/bioinformatics/bti770 </ref>.

After predicting the structural and functional features of our protein as well as relationships to other proteins via structural alignments, we now want to generate an homology modelling for the secondary structure prediction of our protein. This is an important function, since in real life analysis the 3D structure of proteins is often unknown. For this purpose, we used for the model creation the three tools Modeller, Swissmodel and iTasser with different input settings. We also created some multiple template alignments with the tool Modeller. Then, we evaluated our generated models with the resulted scores from the modelling tools and the additional calculated GDT scores, C_alpha RMSDs and the all atom RMSDs. Last but not least, we will compare and discuss our results in more detail.

Modeller is a tool for homology or comparative modeling of protein 3D-structure. It uses a provided alignment of sequences to be modeled with known related structures and calculates automatically a model. Modeller has a lot of functions available, like including de novo modeling of loops, clustering and multiple alignment of protein sequences or structures etc. <ref> http://salilab.org/modeller/about_modeller.html, retrieved June 08, 2013. </ref> However, many users find it difficult to use Modeller as it is based on the command line and Python scripting skills are required to use this tool efficiently. <ref> Bhusan K Kuntal, Polamarasetty Aparoy and Pallu Reddanna(2010): "EasyModeller: A graphical interface to MODELLER". BioMed Central (BMC) Research Notes Vol.3: 226. doi:10.1186/1756-0500-3-226. PubMed: 20712861]. </ref> So, in the year 2011 some students wrote a basic tutorial for Modeller .

2PAH shows the 3D structure of the protein P00439 residues 118-452. Therefore, only the biopterin domain is included not the ACT domain. It includes the catalytic domain. This is the part which gets aligned with the other structures in the figures above.
A quite good structure consensus was reached with template 1J8U which was expected as it has a sequence identity of 100% to 2PAH (<xr id="mod_1j8u"/>). It almost matches perfectly with the catalytic domain and even forms the binding site. Only at the end the structure is not coiled any more and differs from 2PAH. The model based on 2PHM with a sequence identity of 89.7% also was aligned into the catalytic domain with quite good results, although it is a bit worse than the model generated with 1J8U (<xr id="mod_2phm"/>. The binding site is visible, but smaller and therefore more difficult to access. For the structure build with template 3LUY, which only has a sequence identity of 22%, a lot of differences to the target structure can be viewed (<xr id="mod_3luy"/>). The binding site is completely missing, but again the structure is linked to the binding site of 2PAH. In the first two models the templates themselves are matched quite good to 2PAH, whereas for the third model the template is not very well aligned.

The templates and their sequence identities as well as the combined Z-Score for each one.

</figtable> Looking at <xr id="modeller_single_zscore"/> you can see that for higher sequence identities lower Z-Scores are achieved. Remarkably for the model based on 2PHM it is lower than for 1J8U although the sequence identity is a bit lower. This might be caused by the uncoiled end (<xr id="mod_1j8u"/>). Z-scores represent the divergence of the standard deviation to the mean. The further away of zero the more likely it is no random similarity. As 3LUY is close to zero you can see that the accordances between this structure and 2PAH is more likely to be caused by random than for 1J8U or 2PHM.

For the first alignment the structure matches nearly perfectly with the catalytic domain of 2PAH (<xr id="mult_big"/>), where only a small part is not aligned. The mixed alignment also has reached a pretty good result (<xr id="mult_mix"/>) and is nearly identical to the first one. Both show a high accordance at the binding site. Only the alignment of the four structures with low sequence identities could not match very well to 2PAH (<xr id="mult_low"/>). In fact it seems that it does not form any structure at all and just remains uncoiled even at the small part aligned to the catalytic domain and forms no binding site.

Like in Modeller the model generated with template 1J8U reaches a good match with 2PAH even it is not as good. Remarkably this time not only the catalytic domain was matched (<xr id="swiss_1j8u"/>). However, for 2PHM which still has a sequence identity of about 90% to 2PAH it is much worse and seems to be random (<xr id="swiss_2phm"/>) and again the 3LUY generated model shows barely a convincing superimposed structure (<xr id="swiss_3luy"/>).

Besides of the structure Swiss-Model also gives ANOLEA and GROMOS values: <figure id="anolea">

Here you can see that some ligands are not used for the model. For 1J8U the ligand H4B was removed and only FE2 remains. For 3LUY with excluding the ligand PPY no ligand was left at all. Only for 2PHM there was no change of the ligand between template and model.

I-TASSER is a webserver for an hierarchical protein structure modeling approach. It is based on the Profile-Profile threading Alignment (PPA) and the iterative implementation of the Threading ASSEmbly Refinement (TASSER) program. I-TASSER has a new confidence score (C-score) included, adapted from the output values of PPA and Monte Carlo simulation. The output of I-TASSER includes five predicted models and their related C-score as well as only for the first model the estimated TM-score and RMSD value. Although, TM- and C-score possess a significant correlation, they were introduced for different purposes. The C-score gives a judgement about the confidence of the server prediction and the TM-score the absolute quality of the final model in comparison to the native structure (estimated through the C-score calculation). <ref name="itasser"> Yang Zhang (2008): "[zhanglab.ccmb.med.umich.edu/papers/2008_2.pdf I-TASSER server for protein 3D structure prediction]". BMC Bioinformatics Vol.9: 40. doi:10.1186/1471-2105-9-40 </ref> 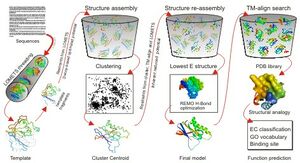 Schematic representation of the steps used in I-TASSER for the protein structure and function prediction.

A description about I-TASSER as well as the graphical protocol shown in <xr id="itasser_protocol"/> can be found here.

For the modelling with I-TASSER we used the following different cutoff values:

An interesting observation is that the model generated with template 1J8U in <xr id="itasser_1j8u"/> is apparently less consistent to the template itself than the model generated with 2PHM in <xr id="itasser_2phm"/>, which overlaps a little bit more. But both models are very good predictions and match a huge range of the reference protein 2PAH, which cannot be said about the <xr id="itasser_3luy"/>. In this image the model of template 3LUY hardly overlaps with the structure of 2PAH and with the template itself, too. But in comparison to the other two tools this predicted model is more precisely.

Lab journal
For the evaluation we only used the first generated model of the three tools.

</figtable> In <xr id="eval_scores"/> one can see, that the RMSD value (weighted and un-weighted) is getting higher the lower the sequence identity of the models, generated with the given templates, gets. In contrast, the GDT value increases at the same observation. The RMSD measures the average of the distance between the atoms of the superimposed structures and the GDT searches the largest set of equivalent residues and deviates them by a specified distance cutoff (mostly four ones). Thus, the GDT takes only regions into account where residues show a low distance to each other. So, the GDT is better for finding the best fitting model. In comparison to the quality scores of the modelling tools, the Z-score of Modeller in <xr id="modeller_single_zscore"/> seems to be like the RMSD score, since it does getting lower the higher the identity of the templates gets. But the Z-score has a negative factor and the RMSD a positive one and therefore the range of this two scores has a high difference. The C-score from the I-TASSER tool in contrast to the Z-score is more similar to the GDT values. The lower the C-score the higher the sequence identity of the templates will be. Here, the C-score has also negative values and the GDT positive ones. So, the correlation between Z-score and C-score is the same as between GDT and RMSD.

If one compares the output of the three tools, one can recognize immediately that I-TASSER creates better models as Modeller and this in return better models than Swissmodel. Nevertheless, I-TASSER is very slow and needs a lot of time (until 60 hours for one job). One good thing of this tool in contrast to the other ones is the output of five models and the calculated values ​​of several models. In Modeller and just a little bit in I-TASSER the prediction depends on the similarity of the templates, because the higher the similarity the more overlapping is the structure of the model with the reference structure. Only Swissmodel does not have any dependency, since all generated models have a bad conformance to 2PAH.

For improving the generated models, one could use other predictions like disorder, transmembrane helices or other structure predictions.