Difference between revisions of "Hemochromatosis 2011" 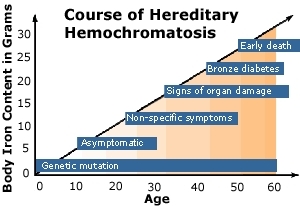 This entry is about the primary form and especially type 1 of Hemochromatosis. Hemochromatosis is a hereditary autosomal recessive genetic disorder caused by a mutation of the HFE-Gene and the breakdown of the regulation of the iron absorption. It was first described by Armand Trousseau in 1865 in a report about diabetes.

Iron is conserved by all living cells because it is necessary for aerobic respiration. But an excessive amount of iron stored in the body is toxic. Hemochromatosis is the generally used term if the body stores too much iron. There are two different forms with subtypes of hemochromatosis possible: primary and secondary.

Primary hemochromatosis is usually caused by a genetic problem or mutation, resulting in storing too much iron due malfunction at the regulation of the the iron absorption.

Secondary hemochromatosis can be temporarily acquired if a person is affected by chronic alcoholism or received many blood transfusion in a short time.

The symptoms of Hemochromatosis change with the age of the patient. A genral overview is shown in Figure 1. But the slope can differ from each individual.

Primary Hemochromatosis occurs at different subtypes, each of them caused by a mutation of a important protein. But all of these have in common that an excess of iron is deposited in different organs leading to their malfunction. The symptoms occur mostly between the fourth to fifth decade of lifetime. Women show symptoms typically later than males because of the menstruation and the resulting loss of blood.

Mutation at the HFE gene on the short arm of the chromosome 6 position 6p21.3 encoding the protein hereditary hemochromatosis.

Mutation at the HJV gene on the long arm of the chromosome 1 position 1q21 encoding the protein hemojuvelin.

Mutation at the TFR2 gene on the long arm of the chromosome 7 position 7q22 enconding the protein transferrin receptor 2.

Mutation at the SLC40A1 gene on the long arm of the chromosome 2 position 2q32.30 encoding the protein ferroportin.

There are some more subtypes, but their frequency in population is too rare, to go in detail.

It can be diagnosed by a simple blood test or a liver biopsy. <ref>http://www.nlm.nih.gov/medlineplus/ency/article/000327.htm</ref>

There are two treatments which can but must not be combined to remove iron from the body.

The disease is also described in detail at

Figure 2: The protein structure of the HFE protein.
Source: http://www.pdb.org/pdb/explore/explore.do?structureId=1A6Z

The HFE-Gene alleviates the binding of transferrin which is the carrier protein for iron in the blood cyclus<ref>http://www.uniprot.org/uniprot/P02787</ref>. With a mutated HFE-Gen, the intestines interpret a strong transferrin signal as an deficient in iron. Therefore the cells start an uncontrolled iron import, which leads to an iron overload. The HFE-Protein is shown in Figure 2.

The HFE (High Iron FE) gene is located on the short arm (p) of the chromosome 6 at position 6p22, it is between base pair 26,087,447 to 26,097,058 (see Figure 3). It contains 7 exons spanning around 12 kb and maps to the MHC region 6p21.3 in telomeric position. Therefore the position is almost everywhere defined as 6p21.3. There are homologous in almost all other vertebrate but the position of gene differs greatly.

Figure 3 shows the position of the HFE gen in chromosome 6.
Source: http://www.ornl.gov/sci/techresources/Human_Genome/posters/chromosome/hfe.shtml

A MHC-related 6 domain membrane protein with 4 chains<ref>http://www.pdb.org/pdb/explore/explore.do?structureId=1A6Z</ref>. The chains differ in there configuration (see Figure 4 - 7). While chain 1 and 3 are Alpha Beta constructions, the shorter chains 2 and 4 are classified as Mainly Beta. It is located in all tissues except for the brain<ref>http://www.uniprot.org/uniprot/Q30201</ref>.

HFE is a regulator protein which forms a stable complex with the blood plasma glycoprotein transferrin receptor in the cell membrane. Therefore it controls the interaction between transferrin and transferrin receptor proteins. By complexing with the receptor, it reduces the affinity for iron-loaded transferrin.<ref>http://www.ncbi.nlm.nih.gov/pubmed/9465039</ref> It also regulates the expression of hepcidin, a hormone which is secreted by the liver<ref>http://bloodjournal.hematologylibrary.org/content/115/16/3374.full.pdf+html</ref>. Hepcidin is the so called master regulator of the iron metabolism. It binds to the iron channel protein ferroportin and inhibits the transport of iron out of the cells into the blood.

If the HFE protein has a dysfunction due to a mutation, the repression of the iron import become disturbed because the affinity of the receptor for transferrin is not reduced. The exact mechanisms are not yet clear. Some mutations have a direct influence of the affinity, other decrease the ability to form complexes with beta2-microglobulin but have no effect on the affinity to bind iron-loaded transferrin.

Links to proteins that are involved in causing the disease

There are 11 disease causing allelic variants of the HFE-gene available at the OMIM database.