Several different tools were used in order to look for sequences that are related to glucocerebrosidase in the non-redundant sequence database.

This tool was used four times with the following parameters:

Furthermore the online version of HHSearch <ref>http://toolkit.lmb.uni-muenchen.de/hhpred</ref> was used to search against the pdb70 database of May 14th. 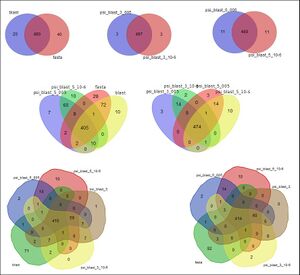 Figure 1: Overlap of the results of the different sequence searches. (At most 5 different lists could be captured in one diagram).

The overlaps of the results of the different tools (FASTA, BLAST, 4 PSI-BLAST runs) have been investigated and are visualized in Figure 1 using Venn-Diagrams (created with <ref>http://bioinformatics.psb.ugent.be/webtools/Venn/</ref>). The results of HHSearch are not included as a different database (pdb70) was used and therefore the results could not be compared.
In total, the six different sequence searches returned 626 unique sequences whereof 405 sequences were returned by each of the searches and 41 were only found by a single one. There were no sequences which have only been found by PSI-BLAST with 3 iterations whereas FASTA returned 25 unique sequences. These numbers indicate that the different sequence searches return very similar sequences and that each of the tools could be used to retrieve the related sequences of glucocerebrosidase. 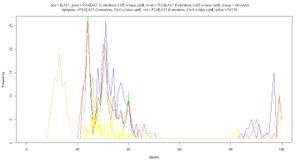 As BLAST only shows details for the 250 "best" alignments, the sequence identitiy could only be analyzed for the 250 first sequences of the BLAST and PSI-BLAST results. The table below shows the number of sequences that fall into a certain interval. These numbers are also visualized in Figure 2 to the right. Most of the sequences which BLAST, PSI-BLAST and FASTA found lie within the range of 20 to 39 percent whereas HHSearch has its peak in the area of 0 to 19 percent. As HHSearch was applied to the pdb database, only sequences with a known 3D-structure could be found. The fact that no sequence with an identity in the interval of 30 to 99 percent was found with HHsearch indicates that there are no known structures of closely related proteins of glucocerebrosidase. The search returned one sequence with a 100% identity: 2NT0 <ref>http://www.pdb.org/pdb/explore/explore.do?structureId=2NT0</ref>, the structure of glucocerebrosidase with a pharmacological chaperone. Interestingly, almost no sequences were found with a sequence identity in the intervall of 60 to 80 percent by either of the tools. 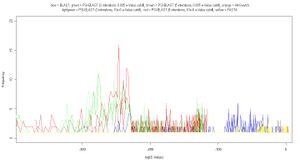 The logarithms of the E-Values of the different datasets are visualized in Figure 3 to the right. E-Values of zero are not shown in this diagram as the logarithm for zero is undefined. BLAST found 37 sequences, FASTA 25, PSI-BLAST (3 it.) 19-21 and HHsearch found 5 sequences with an E-Value of zero. The results (round 3/5) of the different PSI-BLAST runs show similar E-Value distributions which cover "better" values than the results of BLAST, FASTA and HHSearch. Results of the latter can be compared to the values of the first rounds of the four PSI-BLAST runs. PSI-BLAST uses sequences found in the previous round to construct a score model for the next round and is therefore more sensitive to distantly related proteins. HHSearch returns sequences with the worst E-Values, which indicates, that the pdb database does not provide many related sequences to our reference sequence. This observation is in agreement with the results of the identity distrubution.

The sequences obtained were compared to the 582 search results of the term "glucocerebrosidase" in the HSSP database <ref>http://mrs.cmbi.ru.nl/mrs-5/entry?db=hssp&id=3keh&rq=glucocerebrosidase</ref>, which provides information of homology-derived secondary structure of proteins. As the nonredundant database (nr) consists of several databases (GenBank, RefSeq, PDB, SwissProt, PIR, PRF) the identifiers of the sequences had to be converted into Uniprot AC numbers (as used in the HSSP database)<ref>http://pir.georgetown.edu/pirwww/search/idmapping.shtml</ref>. Apart from HHSearch the different search tools almost aquire the same precision and the same recall. BLAST and FASTA return slighlty better results then the different PSI-BLAST runs.

Several different multiple alignment tools have been applied in this analysis. The different tools are described in the section below. 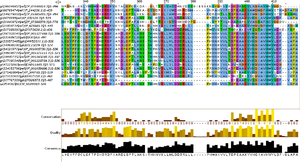 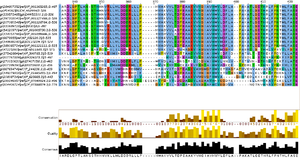 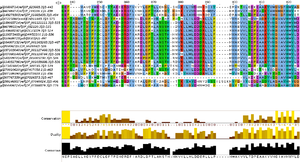 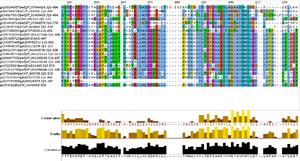 3D-Coffee is a specialised version of T-Coffee which additionally uses structural information. The original sequences are replaced by homologous structures and are aligned using structural aligners. This process results in a structure based multiple sequence alignment. Expresso is an extension of 3D-Coffee which automatically identifies structural templates with BLAST. <ref>http://www.tcoffee.org/Projects_home_page/expresso_home_page.html</ref> 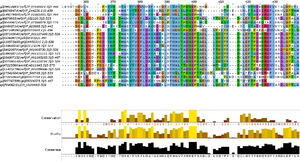 The conservation of the amino acid modifications was analyzed as well:

Gaps in the reference structure

Most of the gaps are due to sequence insertions. The largest example is ZP_07388379.1 which has an additional 300 amino acids at the end. Another one is CAG11843.1 with two times 30 amino acid insertions. The remaining gaps are from the alignment itself.
The 3D-Coffee alignment has the most gaps. The tool tried to align the structure and therefore there are more gaps because amino acids are only aligned, when the structure fits, too. In the Jalview alignment there are a lot of very "gappy" parts, as one can see in the picture. 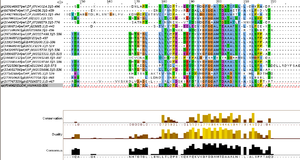 Figure 9: Example of a very "gappy" part of the 3D-coffee alignment 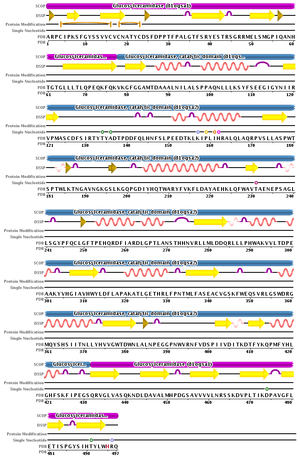 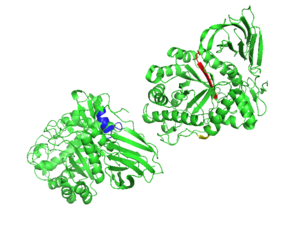 Figure 11: Glucocerebroside with pymol. The interesting regions are colored.

The secondary structure information was obtained from Uniprot<ref>http://www.uniprot.org/uniprot/P04062</ref> (cf. Figure 10). Turn position 150-153 and the beta sheet position 373-381 are of interest, as all of the tools but 3D-Coffee show the same number of gaps. The end of the protein position 503-533 is also interesting, because the different alignments show different gaps. These structures are marked in the picture, which was made with Pymol.
Muscle, Cobalt, ClustalW and T-Coffee only show a few exceptions with few gaps, that they have on their own, whereas 3D-Coffee has many gaps of its own. The turn and the beta sheet mentioned before have no gaps in the alignment with 3D-Coffee but in all other alignments. The results of 3D-Coffee are very different to the alignments of the other tools. Therefore including the 3D-structure seems to have a great influence on the alignment.

Interestingly 3D-Coffee splits some secondary structure elements with many gaps. For example the turn from position 514 to 516 with 40 gaps and the beta strand from position 527 to 533 with even 160 gaps. In the following you can see the alignment:

The reason for the high number of gaps in the 3D-Coffee alignment are the Valine/Glycine and the Tryptophan columns. No other alignment shows this strange split. But we do not know why this occurs. Looking at the PDB structure does not help. 3D-Coffee seems to recognise some secondary structure elements in the large insertions that fit better to Valine/Glycine and Tryptophan.