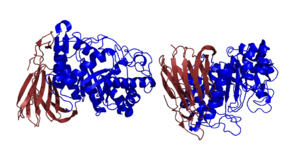 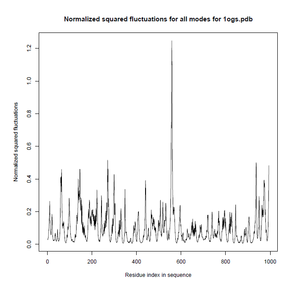 The Glucocerebrosidase shows a domain definition according to their chains. Within the chains, which are identical, a very big domain and small domain can be seen (<xr id="struc"/>). The domains can be also identified by its movements in a correlated motion map ( <xr id="reso"/>). In <xr id="reso"/> the big domains are centered in each chain. The smaller one conssists of two parts in the sequence, which are located before and after the residues of the big domain. A correlation of motions between residues at the beginning and the end of a chain can be observed. In 3D space those two correlating parts are formed together to a bunch of sheets. In contrary, the big domain consists of a high number of helices and a few sheets. All domain databases agree with each other, that the bigger domain has a glycosidic characteristics. However, they differ in their information about the second domain. While Pfam neglects a second domain, CATH classifies it as an alpha-mannosidase II and SCOP identifies a beta-glycanases. Between the chains there is only a slight movement correlation observable. Some residues of the big domain in one chain correlate with a few other residues at the beginning and outside the domain of the other chain. The two chains are connected by those residue contacts.

As chain A and B are identical, the following domain definition concentrates on one domain:

The fluctuation map represents the sum of the displacements in each mode weighted by the inverse of their corresponding eigenvalues. Displaced regions can be seen by high fluctuation values. In <xr id="fluc"/> we can observe a very high isolated peak between both chains (residue index 496). This peak identifies a local flexibility between the chains which is at the same time the most flexible part of the protein.