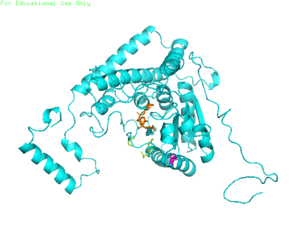 Minimise calculated a much smaller energy for the mutated structure than for the wildtype. This should be due to the introduced mutation which causes changes in the stability of the protein.

The Gromacs energy difference is again quite high.

All energy calculations, especially Gromacs and minimise, agree that the energy of the mutated structure changed drastically compared to the wildtype structure. Comparing these calculations with the observations made from the structure of the amino acids, the high difference is not explainable. Both amino acids are relatively small. But serine takes part in the formation of new hydrogen bonds and may therefore stabilize the protein wrongly. This could be reason for the high energy differences.