The results are the same as for the first run, just with an earlier cutoff

PSIBlast was used in the same fashion as BLAST, with the big_80 as the background database. Commands: 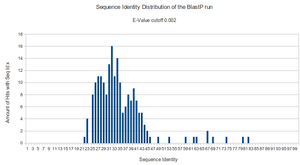