The potential energy decreases over simulation time, which leads to the conclusion, that the conformation of the structure is energetically optimized during the simulation. The decrease in energy is reflected in the large negative drift values. 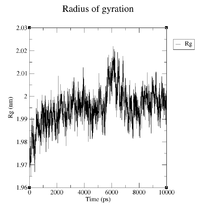