Location of the ASPA gene on chromosome 17. 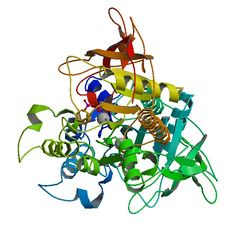 The ASPA gene codes for Aspartoacylase (EC 3.5.1.15). The protein is a 55kDa monomere with 313 aminoacids. The structure of Aspartoacylse was first solved in 2006.

This enzyme catalyses the breakdown of N-Acetyl-L-Aspartate (NAA) to L-Aspartate and Acetate. This reaction is a hydrolysis and thus requires a water molecule. In figure Reaction catalysed by aspartoacylase, you can see the reaction schema.

Furthermore the ASPA mutations lead to pleiotropic effects, resulting in a series of genomic interaction in the brain. For example, low levels of glutamate and GABA have been registered. <ref name="pleiotropic"> Sankar Surendran, Kimberlee Michals-Matalon, Michael J Quast, Stephen K Tyring, Jingna Wei, Ed.L Ezell, Reuben Matalon, Canavan disease: a monogenic trait with complex genomic interaction, Molecular Genetics and Metabolism, Volume 80, Issues 1–2, September–October 2003, Pages 74-80 </ref> Due to the decreased turnover of NAA, this compound accumulates in the brain, as well as in cerebral fluids and plasma of Canavan patients. That is why elevated amounts of NAA in the excreted urin are a further indication for the disease.

Compartimentalization. NAA is produced in the neuronal cells of the grey matter and transported subsequently to the glial cells of the white matter. There, Aspartoacylase is expressed to degrade NAA.[3]