Not all mutations leading to Canavan disease have the same amount of effect on the protein. However, all those listed above as disease-causing mutations lead to a loss of function to at least some extent. 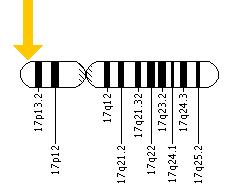