Gaucher Disease (GD) is a genetic disease and is known as the most common prevalent Lysosomal Storage disease (LSD). The French doctor Phillipe Gaucher described it originally in 1882 and this disease is named after him. GD is caused by the recessive mutation in gene GBA located in chromosome 1 which leads to the deficiency of the enzyme glucosylceramidase (glucocerebrosidase). This enzyme is needed to catalyse the breakdown of the fatty substance glucosylceramide - a cell membrane component of the red and white blood cells. The lack of the enzyme therefore leads to the accumulation of glucosylceramide in the cells and organs, mostly in the liver, spleen, bone marrow and nervous system and prevent them from working properly. There are three Subtypes of GD and each has a wide range of symptoms.

GD is found as the most common recessive genetic disease affecting Ashkenazi Jewish people who are originally from Eastern, Central and Northern Europe. Compared with that in the general population(approximately 1 in 50,000 to 1 in 100,000 individuals[9]), the frequency of GD in Ashkenazi Jewish population is much more higher (carrier rate approximately 1 in 15 while the disease incidence is 1 in 900[10]).

About 90 percent of patients have type 1 GD which is most common in the Ashkenazi Jewish population, where the frequency of disease incidence is about 1 in 850. Type 1 GD is much more seldom in non-Jewish populations, with approximately 1 in 60,000 disease incidence.
Type 2 GD has an estimated incidence of 1 in 100,000. No particular prevalence in any ethnic group is found.
Type 3 GD has an similar estimated incidence as that of Type 2 GD. The prevalence is considerably greater than Type 2 due to the longer survival of these patients[11]. Type 3 GD is also found common in the population of Norrbotten, Northern Swedish with approximately 1 in 50,000 disease incidence[12].

The symptoms of GD. 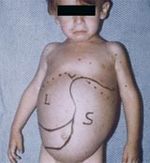 The enlarged spleen and liver[2].

The fatty substance, glucosylceramide (glucocerebroside) accumulates in many places of the body, but most commonly in the macrophages of the bone marrow. The normal bone marrow functions, such as production of platelets and red blood cells were lost, leading to bleeding, bruising and anemia. Moreover, the loss of minerals in bones causes the bones to weaken, and can stop the bone's blood supply, leading to bone-death areas.


Symptoms of GD can vary widely and also depend on both the type of Gaucher disease, and the degree of enzyme deficiency. Generally speaking, Gaucher disease may cause symptoms like:

There are three clinical subtypes of Gaucher disease:

Type 1 (non-neuropathic GD)
It is the most common type. Occurring approximately 1 in 60,000 live births in general population but show very high frequency in Ashkenazi Jewish population . In this type there's usually no damage to the nerve system. The liver, spleen, and bone complications are the normal symptoms. This type can occur at any age, with an average age of 30 at the diagnosis time. Many individuals may have a mild form of the disorder and not show any symptoms.

Type 2 (acute infantile neuropathic GD)
This type is rare and shows more severe nerve system damage than the other types. It begins during the first year of life and progresses very fast. Individuals usually die before 2 years of age.

Type 3 (chronic neuropathic GD)
This type is also rare and begins in childhood or adolescence. It progresses more slowly than type 2. Although the nerve system is affected, the neurological symptoms are milder than in type 2. Patients often live into their early teen years and adulthood.

The following table[13] presents the subtypes summary of GD. 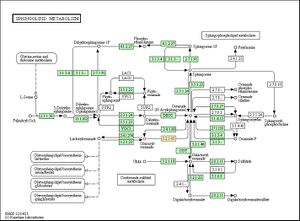 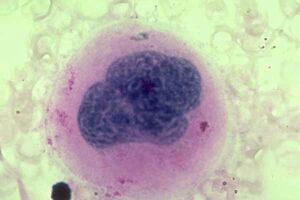 A Gaucher cell whose lysosome is stuffed with glycosylceramid [4].

Gaucher disease (GD) is the most prevalent lipid storage disease. It is caused by mutations in the enzyme glucosylceramidase (glucocerebrosidase) which catalysis the hydrolysis of glucosylceramide to glucose and ceramide in the lysosome.

Glucosylceramide is a ceramide (sphingolipid) with a glucose residue which occurs in the lipid bi-layer of red and white blood cells. Worn out blood cells are digested by macrophages which normally break down glucosylceramide in their lysosomes. In GD patients, however, glucosylceramide accumulates due to the deficiency or lower activity of glucosylceramidase. Consequently, Glucosylceramide is "stored" in the lysosomes impairing the function of macrophages which are referred to as Gaucher cells. These Gaucher cells exhibit lysosomes that are filled with glucosylceramide lipids and aggregate in various parts in the body where they are causing the disease symptoms mentioned above. For instance, Gaucher cells that accumulate in the liver or spline can cause metabolic disorders, whereas accumulations in the brain often lead to cognitive disabilities (Type 2, Type 3). GD is related to Fabry disease which are both lipid storage diseases induced by enzymatic dysfunctionalities in the sphingolipid metabolism pathway. 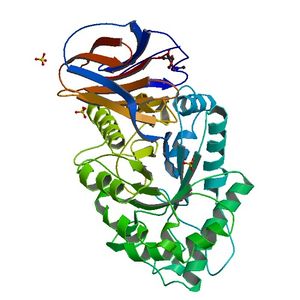 Glucosylceramidase (EC 3.2.1.45) is a hydrolase which breaks down glucosylceramide to glucose and ceramide (see above):

The glucosylceramidase gene is named GBA (GBA1, GCB, GLUC) and is located on the q arm of chromosome 1 at position 21 (1q21). It is about 7.6 kb long and contains 11 exons as well as 10 introns which are known to be spliced in different ways resulting in various gene transcripts. The tissue level of GBA mRNA vary among different cell lines. High levels were reported in epithelial and fibroblast cell lines. There is a highly homologous pseudogene (GBAP) located 16 kb downstream with a sequence identity of 96%. It has been shown that recombination events between GBA and GBAP can cause mutations involved in GD. [15] 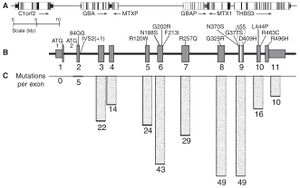 Number of mutations per exon associated with Gaucher disease [7].

GD is an autosomal recessive disease which requires two mutated alleles for being elicited. Both females and males are affected in the same way.
GD is highly polymorphic: about 250 mutations have been reported from which 203 are missense mutations, 18 nonsense mutations, 36 small insertions or deletions, 14 splice junction mutations, and 13 complex alleles carrying two or more mutations. These mutations were associated with the three types of GD. However, there is only a weak genotype-phenotype relationship since the phenotype depends on mutations of both alleles and many other factors including environmental and infectious exposures as well as different genetic modifiers. Hence, estimating the phenotype and the severity of disease symptoms is in most cases not feasible even though the gene sequence is known.[16]


Although the genotype-phenotype relationship is not very strong, there are some reports showing that some mutations appear much more often than others. For Type 1 GD, four mutations: N370S, 84GG, IVS2+1G>A, and L444P account for 90% of the mutant alleles in Ashkenazi Jewish individuals and for 50%-60% of mutant alleles in non-Jewish individuals[17]. And L444P is reported as the main mutation associated to Type 2 and 3 GD[18][19].

The diagnosis of GD is based on clinical symptoms and laboratory testing. The individuals who have typical GD symptoms, such as bone problems, enlarged liver and spleen, easy bleeding and bruising or nervous system problems etc., are highly suspected. To diagnose GD, there are mainly two methods:

Enzyme analysis
It is currently the most accurate diagnosis of GD. It measures the level of glucosylceramidase enzyme activity simply based on the facts that the people with Gaucher disease have much lower amount of enzyme activity than normal. But this testing is not reliable to screen Gaucher carriers, because some carriers have a enzyme level in the normal range.

Genetic mutation analysis
It tries to find the common GBA gene mutations. However, it is not completely sure that all of the genetic mutations related to GD have been identified, this test therefore isn't considered definitive.

There are some more testing to track the progression of GD: 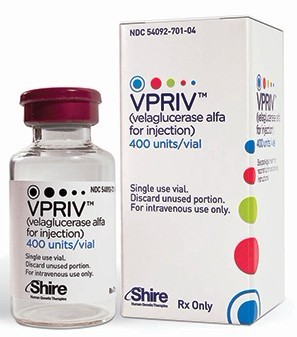 There is no confirmed cure for GD. The most treatments have focused on controlling specific symptoms and reducing complications.

Enzyme replacement therapy
This approach is commonly used. It replaces the deficient enzyme with artificial enzymes in order to improve the enzyme activity level. This is frequently effective in people with type 1 and, in some cases, type 3. But there is no observed effective for the neurological problems because the replacement enzyme is not able to cross the blood-brain barrier[20].

Bone marrow transplantation
This approach has been used for severe cases of GD. It removes and replaces the blood-forming cells that have been damaged by GD. Many GD symptoms can be reversed. Due to the high risk in surgery, it's not performed as common as the enzyme replacement therapy.

Substrate reduction therapy
Instead of increasing the enzyme activity, in this therapy, orally drugs as inhibitor are used, for example Miglustat[21], to reduce the substrate (glucosylceramide ) level to get a better balance for the activity of the deficient enzyme.

Gene therapy
Some researchers are currently working on gene therapy. The ideas is to introduce normal GBA genes into cells of the patients. Hopefully, these cells would then produce sufficient amounts of enzyme glucosylceramidase. But the research is still ongoing, much work and time is needed before it may become available.