Gaucher Disease is the most prevalent Lysosomal Storage Disorder (LSD) and was first described by Philippe Gaucher in 1882. The genetic disease is caused by a recessive autosomal mutation in the gene GBA. The mutation leads to a mal- or disfunction of the enzyme glucocerebrosidase causing an accumulation of glucocerebroside in cells and certain organs. The course of the disease is very variable and results in many different symptomes. Respective to the severity and the symptomes of the disease, it is subdivided into three clinical subtypes.

Gaucher Disease patients show various symptomes caused by the accumulation of glucosylceramide in the cells. The disease is subdivided into three clinical subtypes, depending on the absence (Type 1) or presence (Type 2 and 3) of primary central nervous system involvement and its progression.
Type 1, also called the adult or nonneuronopathic form, is the most common form of Gaucher's Disease and is most prevalent in the Ashkenazi Jewish population. In this form the symptoms (described below) may appear anytime from childhood to adulthood. Type 2, the infantile or acute neuronopathic form, appears very early after birth and is lethal within one or two years. In addition to the symptoms listed below, this form of disease can cause abnormal eye movements, seizures and brain damage. Type 3 is the juvenile, chronic neuronopathic form, which also affects the nervous system but progresses more slowly than Type 2. Type 3 is further subdivided into three subtypes: Type 3a shows mostly neurologic complications, Type 3b exhibits skeletal and visceral disorders and Type 3c manifests neurological symptomes limited to horizontal supranuclear gaze palsy, cardiac valve calcification and eye disorders. 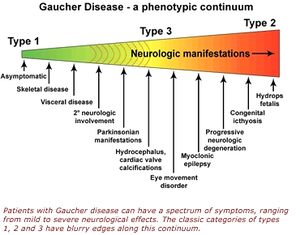 Symptomes and their severity respective to the type of Gaucher Disease
Source: http://www.glogster.com/media/1/3/76/87/3768778.gif

There are different tests to diagnose Gaucher disease <ref>http://www.mayoclinic.com/health/gauchers-disease/DS00972/DSECTION=tests-and-diagnosis</ref>:

Enzyme replacement therapy does not treat the neurologic disorders of type 2 and 3 disease. As the enzyme is not able to cross the blood-brain barrier, the treatment only affects the visceral involvement but the brain involvement is still able to progress. <ref>http://www.gaucherdisease.org/gaucher_2_3.php</ref> 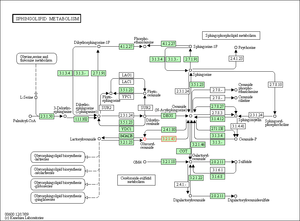 The gene coding for Glucocerebrosidase is called GBA. It is located on the long arm of chromosome 1 at position 21 from base pair 155,204,239 to base pair 155,214,653 on the reverse strand. It has 11 exons and a cDNA length of about 2.5 kb. 16 kb downstream exists an pseudogene with length 5 kb which has an identity of 96%.
There are two different ATG codons as translation initiation sites. The second one encodes a functional signal sequence of 19 amino acid residues.
Mutations in this gene are associated with Gaucher Disease and Parkinson Disease. It is conserved in vertebrates like chimpanzee, dog, cow, mouse, zebrafish and also in the fruit fly, the mosquito, C.elegans, and the fungi M.grisea, and N.crassa.

Glucocerebrosidase is a lysosomal membrane-associated glycoprotein. It is an enzyme, which catalyzes the breakdown of Glucocerebroside (also called Glucosylceramide) into ceramide and glucose by hydrolyzing its beta-glucosidic linkage. The interaction with the lipid phosphatidylserine and the protein saposin C stimulates its enzymatic activity.

Glucocerebrosidase is a peripheral membrane protein which consists of three domains. Three disulfide bonds are responsible for the stability of the three-dimensional structure. The catalytic site is located in Domain III, a (β/α)8 TIM barrel, where glutamine residues 235 and 340 play key roles.
The nascent polypeptide has a length of 536 amino acids. 39 encode a signal sequence that is later cleaved in the endoplasmatic reticulum. The mature protein is build up of 497-amino acids.
The active site of the enzyme consists of two amino acids: Glu235 and Glu340.

Currently 303 mutations of the GBA-gene are listed in HGMD <ref>http://www.hgmd.cf.ac.uk/ac/gene.php?gene=GBA</ref> (as of 2011/05/13) whereof 299 are known to cause Gaucher's disease. Most of these mutations reduce or inhibit the catalytic activity of Glucocerebrosidase even though not all af them are located at or near the active site of the protein. <ref> Dvir H, Harel M, McCarthy AA, et al. X-ray structure of human acid β-glucosidase, the defective enzyme in Gaucher disease. EMBO Rep. 2003;2003:704–709 </ref>
Four of these mutations are responsible for about 90% of the disease-causing alleles in the Ashkenazi Jewish population, and only 50-60% in non-Jewish populations.